The brand's historic address, originally opened in 1913, has doubled in size and was designed by Peter Marino. 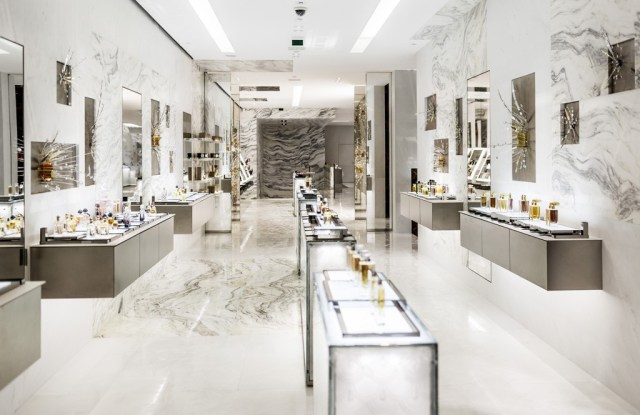 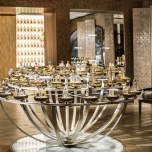 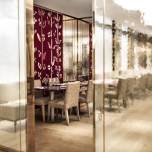 PARIS — Guerlain is growing, and its revamped flagship store at the brand’s historic address at 68 Avenue des Champs-Élysées is here to prove it.

The Moët Hennessy Louis Vuitton LVMH-owned brand reopens the doors of its expanded historic store, first opened in 1913, on Saturday.

“The idea behind this is a change in scale,” said Guerlain chief executive officer Laurent Boillot at the inauguration of the boutique.

Although he declined to give figures, Boillot said the brand has been performing well thanks to the success of La Petite Robe Noire fragrance in Europe and Orchidée Impériale skin care in Asia, and that the ongoing construction of a new factory for the brand in Chartres is set to ensure its continued expansion.

“We wanted to create the most beautiful temple to beauty, and the biggest,” he said of the restored boutique, which he claims is the world’s largest beauty stand-alone. “It is a place for exploration, a laboratory.”

The 10,764-square-foot store, double its previous size, covers four floors, including a restaurant headed by Michelin-starred chef Guy Martin in its basement.

The space was designed by Peter Marino — the go-to architect for luxury retail — who worked with its historic elements and integrated works from 20 contemporary artists as well as retaining elements of decor by Jean-Michel Frank, Christian Bérard and Diego Giacometti.

“I put something modern in the old and something old in the new,” said Marino. “You’ll feel very much like you’re in a home and not in a commercial establishment.”

The original 500-square-foot boutique has been restored, and retains its listed marble floors and counters, enhanced with a polished metal ceiling by the Haas Brothers and four chandeliers by Baccarat, with whom the brand has collaborated for generations on its scent bottles.

Adjoining this space is a more modern, corridorlike white area designed to be a sales space for fragrance, makeup and skin care, including dedicated alcoves for men’s fragrance and quick makeovers, and several art installations.

At the back, stairs lead down to a space offering home fragrance and a selection of teas created especially for the store, and from which Le 68, the restaurant, can be entered.

Boillot explained that often women who came to the boutique’s beauty institute wanted to stay longer because they felt at home, which was not possible in the past.

“We wanted to offer a wider experience,” he said, reiterating, “It is not a Guerlain restaurant.”

Guy Martin has, however, used certain ingredients found in Guerlain’s fragrances, like rose, ylang-ylang and tonka bean, to inspire some of the dishes on the menu, which will change seasonally.

Up on the second floor, a “Hall of mirrors” shows off historic Guerlain collections and features an artwork by Marino made of the brand’s “bee” fragrance caps to create an infinitely reflected fragrance bottle.

This hall opens onto a fragrance space with walls clad in straw marquetry housing a giant fragrance organ, as well as several salons for consultations and a room offering silk scarves, scented gloves and fans — all products offered by Guerlain in the past but discontinued — created especially for the address.

The beauty institute, on the third floor, has also been completely revamped.

It retains nine cabins, all decked out in relaxing pale shades.

The brand has trained its beauty therapists and is introducing a new concept of treatment to accompany the relaunch: Instead of choosing off a “menu,” customers buy personalized treatments by length of time according to their needs. Looking ahead, Guerlain is planning a series of additional store openings in the French capital, Boillot confirmed. The brand currently has 16 boutiques in Paris.

“There is the potential to have a total of 25…within the next five years,” he said.