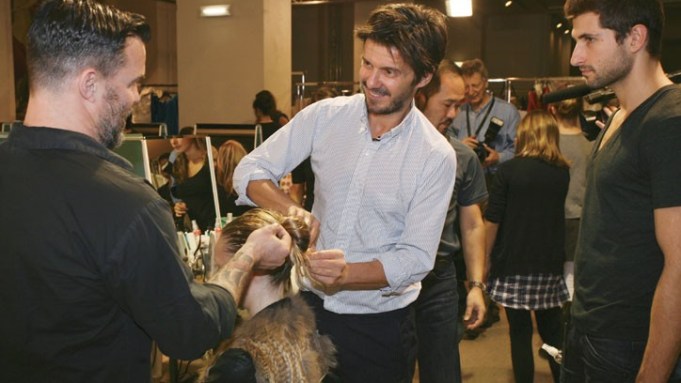 In the hands of master hairstylist Guido Palau, hair is a material that can be sculpted and molded in inﬁnite variations. Palau’s creativity was on full display this season—from the Seventies-inspired Diana Ross tribute at Marc Jacobs to the highly polished chic coils at Louis Vuitton to the simple elegance of an extra-long ponytail at Loewe. “This season is about a strong woman and a rich, romantic glamour, but also a little decadence,” says Palau, who serves as Redken’s creative consultant, too. “We did everything from small minimalist head shapes to full ﬂouncy curls and frizz.” Texture played a key role, particularly high shine that Palau says “looks as if it’s been painted on…Even a small style close to the head can be as glamorous as big hair.” On the other end of the spectrum, Palau used extreme volume, inspired by icons like Ross and Grace Coddington, “to give hair a rugged texture, adding a little youthful fun.”