Hennes & Mauritz is set to unveil Karl Lagerfeld’s entry into the world of masstige fashion in Paris tonight. To the designer, “it’s all about taste.” 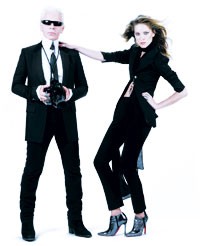 Norma Kamali on Her New Book and the Future of Wellness

PARIS — Here it comes: Karl for all mankind.

Tonight, Swedish fashion giant Hennes & Mauritz will lift the curtain on its hotly anticipated Karl Lagerfeld for H&M collection at a party atop the Pompidou Centre modern art museum here.

Priced from $19.90 for a T-shirt up to $149 for a wool-cashmere coat, the line — which will cover everything from women’s and men’s wear to a fragrance and accessories — is bound to generate enormous attention when it hits stores Nov. 12.

But in a twist on the burgeoning “masstige” phenomenon, H&M’s marketing plan is based on “mass-clusivity,” which means Lagerfeld’s chic jersey skirts, narrow-sleeved jackets and tuxedo shirts will be sold in only about half the company’s 1,000 doors — less than previously projected — to give the line a more exclusive cachet.

Meanwhile, the international advertising push to trumpet the collaboration is emblematic of both Lagerfeld’s stature and H&M’s ambitions: massive billboards and a mini film starring the designer that will hit the airwaves in the days leading up to deliveries.

Swedish director Johan Renck, the man behind videos for Madonna and commercials for Nike, wrapped up four days of filming last weekend in Paris. It culminated with an all-day shoot at the Bristol hotel with Lagerfeld, a gaggle of supermodels and scores of extras.

The spot, two minutes long in some markets, will play with the shock factor of a world-famous couturier moonlighting at a mass chain: “Karl, Karl, is it true?” a distraught middle-aged man bellows at Lagerfeld across a crowded restaurant, having just learned the incongruous news.

“Of course it’s true,” an unruffled Lagerfeld responds from his candelabra-laden table.

“But it’s cheap!” the man, dressed in a velvet smoking jacket, insists

“What a depressing word,” Lagerfeld snipes back. “It’s all about taste.”

And Lagerfeld assured he applied his full-strength design sensibility to the H&M project, basing his 30-piece collection for women and men on his Lagerfeld Gallery concept and his personal penchant for sleek tailoring, white shirts and touches of hardware.

“The work process is the same for expensive clothes or inexpensive clothes,” he said in an exclusive interview between takes. “I thought it should be a strong graphic statement. There’s hardly any color. They’re very simple, basic items, but ones I think are right for modern life.”

In fact, Lagerfeld said he was given only one design directive he could easily agree with: No Chanel.

“They never said, ‘Make me a commercial jacket.’ I did what I wanted,” he said. “And I must say, designing it and doing the campaign — even promoting it — has been fun.”

To be sure, the Lagerfeld collaboration marks a watershed moment for H&M, which is bound to attract a new fashion-informed audience — perhaps even a few luxury snobs — thanks to the joint Lagerfeld label.

“I think you have to go [to the store]. It’s too interesting to not check it out,” asserted Jörgen Andersson, H&M’s marketing director. “This will be the Christmas gift from H&M to our customers.”

While some might view tapping a big-name designer as a shift in strategy for the $6.2 billion, fast-fashion behemoth, Andersson described it as simply a new expression of its “democratic” ethos.

“The business idea of H&M is fashion and quality at the best price,” he explained. “We believe…good fashion and good design should be available to anyone, no matter how much money you make or where you live.

“For me, [Karl Lagerfeld for H&M] is the ultimate proof of the pudding. Why pay a fortune for a great jacket when you can pay 70 euros [or $85 at current exchange]?”

For Lagerfeld, the feeling is mutual.

“[H&M] is a fashion phenomenon and I like to be a part of those things,” he said with his characteristic understatement. “It’s part of my job. It’s the modern thing to do. Also, I like the idea of my name being used on a broad scale.”

While he’s never scoured the racks of an H&M outlet himself, Lagerfeld said he’s long admired the brand’s advertising, which juxtaposes luxurious fashion images with the surprise of a low-price sticker. He also has noticed young women in the design studios of Fendi, Chanel and Lagerfeld Gallery wearing affordable but striking H&M pieces.

As for the men’s wear, one of the surprising elements of the collaboration, Lagerfeld said it sprang more from his belief that “clothes like sweaters and jeans have no sex until someone puts it on” than any desire to compete with his buddy, Hedi Slimane of Dior Homme fame.

To wit: He rendered jackets unisex by having a cuff link-like button and chain closure rather than making some fasten on the left and others on the right.

“There’s a solution for everything,” he quipped.

Elsewhere, the collection has a dressy, holiday bent (although H&M hopes it sells long before Christmas), with many cocktail dresses — some hemmed in organza, others trimmed in lace. Accessories — including the Terminator-esque sunglasses Lagerfeld favors — retail from $9.90 for a ring to $69.90 for a leather bag.

The fragrance, a joint venture with Lagerfeld’s fragrance licensee, Unilever, also was a Lagerfeld impulse. Dubbed “Liquid Karl,” the unisex scent has notes of bread and chocolate and is expected to retail for about $24.50, or 20 euros.

Outlining the marketing plan for the launch, Andersson said H&M pared back the distribution to 500 locations from 800, deciding to offer the Lagerfeld line only in its most high-profile locations.

“We didn’t want to do huge, huge quantities,” he added. “We asked ourselves, ‘How do you mass market something but with the feeling of exclusivity?’”

However, everything about the advertising is large-scale, realized in collaboration with Paris-based art director Donald Schneider. Explaining the length of the television commercial, Andersson said, “H&M and Karl Lagerfeld together — the whole thing is just too big to put into 20 or 30 seconds.”

Ditto for the outdoor ad images, lensed by Lagerfeld and starring himself and model Erin Wasson. H&M deemed bus shelters too puny, and are opting instead for large-format billboards and building wraps.

Although H&M declined to provide figures, market sources and analysts estimate $10 million is being put behind the Lagerfeld project. H&M spends about $190 million a year on advertising.

H&M plans to air the Lagerfeld commercial in all markets except North America, where its store count is low, Andersson noted. He said the emphasis there would be “print and public relations.” The Lagerfeld collection will be available in about 19 of the company’s 70 U.S. locations. The media plan also calls for cinema, radio, daily newspapers, magazines and Internet advertising, customized to each of the 20 countries where H&M has stores.

Although H&M has long been interested in partnering with a famous designer, Andersson confirmed Lagerfeld was its first choice.

“I think he’s the most well-known modern fashion designer in the world. I think most people know him either by his name or his appearance,” he said. “But we also wanted to find a designer that would suit H&M, someone who feels relevant to H&M, otherwise people might just say, ‘Oh, how much did they pay him?’

“We are selling fashion so we had to have someone who does fashion and who is contemporary,” he continued. “Karl is very contemporary and he’s proven that for more than 30 years. I consider it the perfect match.”

As for the risk of H&M’s high-style bargains stealing sales from the other brands Lagerfeld works for, the designer waved them off, reporting that Chanel recognizes the value of Lagerfeld’s name being spread with the thanks of H&M.

As reported, H&M plans to evaluate the commercial result of the Lagerfeld project before deciding if it will move forth with future collaborations.