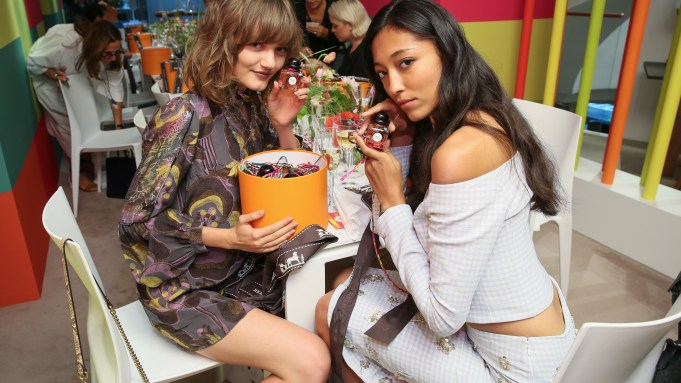 To celebrate the launch of its new Millennial-targeting fragrance, Twilly d’Hermès, the luxury fashion house brought together groups of influencers for interactive events on both sides of the Atlantic.

In New York, influencers came to Hermès’ flagship location on Wednesday for a luncheon. At the store the brand displayed its new virtual reality app for the fragrance launch. By placing a smartphone or iPad over the fragrance’s Twilly scarf, an interactive map of the store pops up with visuals resembling the fragrance’s advertising campaign. Guests included Amanda Ross, Lola Rykiel, Pamela Love and Maryam Nassir Zadeh, among others.

At the luncheon, head perfumer Christine Nagel was on hand to describe her creative process when formulating the scent: “What I have observed coming to New York and big cities, like Seoul and Mexico City, is that young people like these codes of Hermès, but they use it in a different way,” she said. “For example, they’ll wrap a scarf around their breasts or use it as a belt to express their own creativity. This was very intriguing for me and inspired me to take some classical elements of the perfume and twist them in my own way.”

Meanwhile in London, the brand hosted a cocktail at the Saatchi Gallery and tapped local talent for a creative showcase.

The brand worked with Parenthesis Studio — an artist collective — which mounted a colorful and interactive installation incorporating the Twilly scarf. Divine Southgate-Smith, Clara Imbert, Bence Magyarlaki and Ines Zenha Goncalves met while studying together at Central Saint Martins before forming their collective. Channeling the playfulness and vibrance of the scent, the group took cues from the playgrounds of Paris and transformed the brand’s colorful fabric into minimalist sculptures and objects.

“The perfume was inspired by the Twilly scarf,” said Magyarlaki. “We wanted to react to it in a way this fabric is reproduced in the same kind of dimension and the same color palette. It is a playground and there are objects that you can place together or play with.”

Southgate-Smith noted that the group referenced the bold color palette of the fragrance for their large-scale works. They created lively and tactile displays and guests were seen sitting on colorful pieces or stepping into a makeshift space filled with long strips of fabric mixed in with Twilly scarves. Elsewhere, illustrator Charlotte Trounce designed the tabletop and menus using the silhouettes and hues of the Twilly ribbon.

Guests including Emilia Boateng, Sophia Hesketh and Heida Reed enjoyed a performance by Jade Bird and a set by DJ Rina Sawayama.