Microinfluencer FacedByKareem will launch The HipDot Creator Series on Aug. 17.

HipDot's The Creator Series will launch with a product collaboration with FacedByKareem.

HipDot is rolling out a program dedicated to microinfluencer beauty product collaborations.

The company, known for its SpongeBob SquarePants cosmetics collection, works with microinfluencers on social media content, but typically reserves product collaborations for more prominent names, such as singer Kesha. In an effort to support up-and-coming creators, HipDot is launching The HipDot Creator Series, a sequence of collaborations that kicks off Aug. 17 with FacedByKareem, aka Kareem Maliek.

Maliek, who has worked with HipDot on content since last year, shared a product proposal with the company in January, before the onset of the coronavirus in the U.S. HipDot responded to Maliek’s e-mail within the hour it was sent, confirming the company’s interest in proceeding to realize Maliek’s first product collaboration.

“HipDot took my vision and elevated it to a whole collection, even during this time where shopping for makeup in stores may not be the thing people want to do right now,” Maliek told Beauty Inc via phone.

In an interview with Beauty Inc, Jeff Sellinger, HipDot’s cofounder and chief executive officer, said Maliek “deserves a lot of credit” for cold-pitching the company.

“It took a lot of guts for Kareem to reach out and put the amount of thought and effort that he did into his proposal,” Sellinger said. “We hope that Kareem’s launch inspires a lot of creators to go for it and make it happen.” 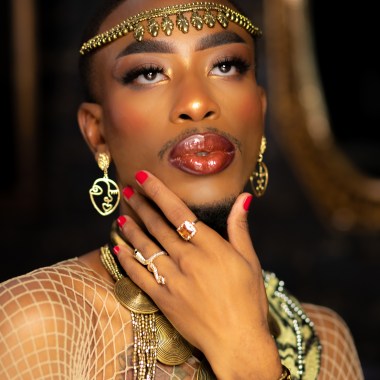 FacedByKareem is the first microinfluencer to create a palette for The HipDot Creator Series.  Courtesy of HipDot

The HipDot Creator Series’ first collection consists of an eye shadow palette, brush set and blending sponge, all of which will be sold on HipDot’s web site. Prices range from $8 for the sponge to $26 for the palette to $50 for a full collection bundle, complete with a gold face mask.

The company plans to release future microinfluencer collaborations “if the demand is there,” Sellinger said.

“It’s up to the audience to decide. If the demand is there, we’ll continue to produce new products,” he said.

HipDot’s series comes as the influencer industry undergoes a coronavirus-induced shakeout. Brands have slashed their marketing budgets to cut costs, and superinfluencers are struggling with relatability, accelerating the rise of microinfluencers.

Maliek is one of a growing number of Black men claiming space in an industry that has historically uplifted problematic, though highly influential men such as James Charles, Jeffree Star and Shane Dawson.

While working at a summer camp program in 2013, Maliek was encouraged to experiment with makeup by his boss, who bought him a mannequin. In creating his HipDot collection, Maliek turned to his 20,000 Instagram followers, whom he polled. He wanted the palette shades to be “multifunctional,” he said, adding that they “work on all complexions.”

HipDot has more cosmetics collaborations in the works, but timelines have slowed due to COVID-19, Sellinger said.

“Retail has been impacted as stores have shut down, but on the d-t-c side, it’s been strong,” he said, adding that consumers should “look for HipDot to be in more mass retail in the coming months.”

Production challenges due to COVID-19 caused the HipDot team to be creative in terms of workflow. On one occasion, Maliek drove to HipDot’s director of product development Paulette Menaskan’s house to see a prototype in-person.

“It was very interesting, with a collaborator, [to meet] on the street and pass off product,” Menaskan said.

“Classic COVID-19 meeting: outside with masks on,” Sellinger said.