Created by Emily Parr and Majeed Hemmat, the brand is focused on winning in the cleanser category.

Two beauty veterans are leaping into the skin-care game with the launch of a new brand called HoliFrog.

Created by publicist Emily Parr and Majeed Hemmat, the founder of B Beautiful Brand Management, the line will launch in September with a range of four facial cleansers, or “washes,” as the duo calls them. Three more will launch over the course of next year, while plans call for HoliFrog to expand into new categories in 2021.

Hemmat and Parr are well-versed in beauty, particularly in the clean category, and share many of the same clients, including Allies of Skin, Briogeo and RMS. The idea for HoliFrog was born after the pair realized no brand was prioritizing cleansing, despite the fact that it’s the most common of all the skin-care steps.

“Cleansing is a category that no brand really dominates,” said Hemmat. “Many brands throw in a cleanser to round out the portfolio — they don’t invest in it.”

“Brands don’t see it as a high-priced item,” Parr added. “We were inspired by different categories in skin care that have high levels of actives, and wanted to infuse those properties into cleansing. Our strategy is to bring the unsung hero to light.”

The timing for the concept seems right. The NPD Group reports that for the 12 months ending June, prestige skin care overall was up 8 percent, and the cleanser category was up by 10.

The brand name itself came to Parr in a flash, after she learned that scientists consider frogs to be an indicator species for humans when measuring environmental aggressors because of their permeable skin. Holi is short for holistic, which reflects her approach to personal care.

HoliFrog will launch globally on Sept. 17; in addition to its own e-commerce site, retailers that will sell the brand include Detox Market in the U.S. and Canada; Space NK in the U.K. and U.S.; Content Beauty and Well-Being in the U.K., and Net-a-porter, dermstore.com and niche-beauty.com, the German-based e-tailer recently acquired by Douglas.

Parr and Hemmat are self-funding the venture, and have made an initial investment of about $400,000. They expect to hit $1 million at wholesale in the first year. The duo worked with Colorado Quality Products to formulate the line, and said it was important to them to use a more significant amount of active ingredients usually found in cleansers. At the same time, they worked to minimize the level of harsh surfactants; consequently, formulas contain anywhere from 3 to 8 percent. 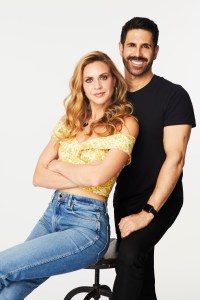 While the duo believes such an approach benefits skin health, it’s also one that requires a harder sell. “Retailers and consumers love lather and suds — 99 percent of consumers feel that foam cleans your skin,” said Hemmat. “Our big challenge is teaching everyone that foam doesn’t cleanse your skin. It dries it out.”

Going forward, the duo is already hatching plans for a subsidiary brand called Saint Lily, which would be geared toward the mass market. “We know there are certain people who will never give up their Cetaphil, but we see a huge opportunity in the mass market to create effective, nonirritating washes,” said Parr, adding she expects prices for that line to be in the $10 range.

As for HoliFrog, Parr and Hemmat want to build out the brand identity gradually, starting with cleansers, then expanding into subsequent steps of a skin-care regimen. “We want the consumer to progress into new phases of her routine with us,” said Parr. “Our goal is that you love the first step so much you can’t wait to see how we reimagine the next one.”