HoliFrog was exactly six months old when the pandemic struck, and while the primarily d-to-c skin care brand didn’t have to grapple with the pressure of retail closures, it had to contend with something equally as daunting: a larger change in strategy.

“March 2020 was supposed to be the month that we expanded beyond cleansers into new categories and approach retailers and share our pipeline,” said cofounder Emily Parr. “Immediately we said — no go.”

Instead, Parr and cofounder Majeed Hemmat changed course, moving to the front-burner three initiatives that were originally scheduled to come later in the development of the brand.

First, rather than make the costly investment required to launch in a specialty retail chain, Parr and Hemmat instead doubled down on digital for customer acquisition, hiring one agency to focus on newsletter marketing and another to run digital ads on Facebook, Instagram and Google.

Next, Parr decided to rebrand and move away from the bright, watercolor images that the brand launched with. “Given our price point and sophisticated ingredient lists, I was worried that as the Gen Z category began to swell, HoliFrog could mistakenly mix with this group,” Parr said. “So before the association had ever been made, I embarked on a rebrand. I quickly realized that for a new prestige brand, incorporating color needs to be intentional and carefully implemented; otherwise the brand’s youthful appearance could identify more with that of Gen Z.” 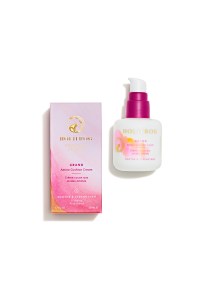 The third big strategic change happened around retail. While originally Parr and Hemmat envisioned launching in a large specialty chain, those plans have now been put on hold indefinitely. “Retail changed before the pandemic, but it took the pandemic for me to see it,” said Parr. “There is a less of a demand for large brick-and-mortar retail stores to open their arms to new indies unless there is some form of exchange of power. It’s now very far from enough to solely be cute, young and cool.”

The founders decided that the considerable means required don’t yet justify the end. “As a self-funded brand, in the midst of the pandemic, we weren’t looking to compete knowing the high stakes,” Parr said.

Instead, the brand looked to Indie beauty boutiques to expand its offline presence, launching in about 50 such stores across the country.

The strategy worked. Sales are expected to reach $3 million this year, and the duo was able to fund its activities without taking on outside capital or investing more than their initial outlay of $400,000. HoliFrog successfully launched a non-cleanser product, Galilee Antioxidant Dewy Drops, a hydrator that is neck and neck sales-wise with its hero cleanser, Shasta AHA Refining Acid Wash.

“The pandemic may have derailed what we planned to do in January 2020 when we had all these goals,” said Parr. “It just changed our goals. If we were in a large retailer and had a footprint in brick-and-mortar, it would have been challenging for a brand with only two founders to navigate. Instead of having to navigate through the retailer’s issue of stores being closed and put together a new strategy to hit retail numbers, we were able to focus on ourselves.”