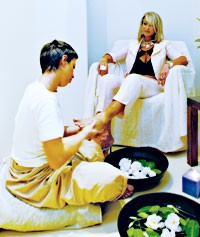 Shiseido in Talks With CVC to Sell Personal-Care Business

HEAD TRIP: While manis and pedis are a beauty necessity for fashion week,hair salon Metodo Rossano Ferretti is also pitching a new treatment for those stressed-out tresses: scalp massages with nutritive oils. The 30-minute therapy is a relaxing and relatively quick antidote to any hair issues brought on by Milan’s smog and fog. Meanwhile, the salon’s new spa is one of only a handful of places in Milan where hot stone massages are available.

GET YOUR LICKS IN: Lollipops, decked out as a French boudoir in shades of pink, is teeming with accessories: shoes, bags, scarves and jewelry, all vying for space atop dressers and pouf chairs. This season’s collection is especially girly and features bows on everything: in pink on a pair of black velvet flats, in pale blue on the handle of a chocolate brown leather doctor’s bag and in black on a pair of pearl drop earrings.

APERITIVO HOUR: The new hotel opened by the fabled Roman jeweler Bulgari is not only considered one of the most luxurious places to stay, but also the chicest place to sip a cocktail. The hotel’s lush grounds, a part of Milan’s Brera Botanical Garden, is home to the bar. Woven rattan couches with chocolate brown organic cotton cushions sit between perfectly manicured trees and hedges. Cocktails are presented with plates of Italian nibbles, and if those aren’t enough, a more bountiful menu is available. It’s best to get in early to ensure a garden seat, as Milan’s chic set has already decided it’s the place to be seen holding a Manhattan.

PART OF THE CLAN: Located next to Gianfranco Ferré’s showroom in Brera, Clan Café is the latest Milan bar to court the cool crowd. Part-owned by Christian Vieri, an Italian soccer star who plays for Inter Milan, the Clan boasts all the right ingredients: First, there’s no drinks menu because the bartenders stir up beverages based on a customer’s favorite flavors. Then there’s the moody lighting that illuminates the bottles and glasses behind the bar, softened further by the latest house and lounge music that floods the space, with its curved lounge chairs, and filters out to the street — where many of the hip thirtysomethings congregate. Clan Café serves breakfast, lunch and a “buon” aperitivo as well as happy hour from 6-8 p.m. Clan Café keeps its glass doors open until 2 a.m., welcoming local soccer players, TV personalities and the fashion set for late-night cocktails.

BOOKS AND BREWS: Midway between the city center and the railway station is Mediateca, a new multifloor cafe and bookshop. The eclectic and broad selection includes rare Italian and foreign DVDs from every decade, and guests can enjoy browsing or reading perched on bar stools or nestled in comfy couches inside the cafe while watching Milan street life wander by. Mediateca’s cafe also spills out onto a manicured garden, where generous linen umbrellas shade a lunchtime treat.

FEEL THE BURN: If your hotel gym just barely rivals that of your home treadmill, work up a post-show sweat at the new Downtown Palestre Diaz. Located just across from Milan’s Galleria, Downtown’s sprawling cardio equipment room guarantees immediate guilt relief from one too many glasses of champagne or luxury expenditures. The rooftop bar serves fresh carrot juice for that needed dose of B-12 to get through show week.

FERRAGAMO REFRESHES: Salvatore Ferragamo has recently redesigned its women’s store on Via Montenapoleone, part of Milan’s famous Golden Triangle. The aim was to give the store a “more modern and welcoming” ambience, the Florentine company says. Customers are greeted by the four impressive windows that were part of the original design, but inside the 3,200-square-foot space they find a new layout, complete with columns in natural stone. The store will be open on Sundays during Milan Fashion Week.

SWEDISH MEATBALLS: It took Swedish fast-fashion chain Hennes & Mauritz 17 years to land in Italy — where the group opened in central Milan last year. This month, the chain celebrated the opening of its second Italian store, in the popular Milanese shopping street Corso Buenos Aires. Now there are no plans to stop, as Margareta Van Der Bosch, the store’s head of design, revealed. H&M is concentrating on spreading its brand throughout other areas of Italy. The 13,500-square-foot space on Corso Buenos Aires features an array of women’s wear and children’s wear, and the kids’ section is festooned with paintings of zoo animals, funky wallpaper and wooden display containers shaped like trucks.

EDA LOT: Eda is the latest addition to Milan’s stylish restaurant scene. Dark brown glossy tables line the three-level restaurant and bar, complemented by accompanying banquettes and centerpiece cacti. Eda’s dining tables also have another purpose that’s purely fashion — to be arranged to form a catwalk. In fact, Eda already confirmed its place in Milan’s fashion scene, after hosting a party during the last fashion week in the spring and regularly entertaining such designers as Alessandro Dell’Aqua, Domenico Dolce and Stefano Gabbana and the Caten twins from DSquared. Minimalist in design with antique and modern touches — like the multicolor mirror painting that dominates the entrance — Eda’s cuisine is far from fussy. The fare is typical Italian, as owner Gianfranco Olivotto serves trattoria-style dishes with a Sicilian flavor, like Pasta Alla Norma — fried eggplant and tomato pasta. The extensive wine list, however, touches every region of Italy.