The women of Sunnies Face, the Filipino cosmetics company that has the world buzzing.

A Filipino cosmetics company has the world buzzing about Southeast Asian beauty.

Sunnies Face is a makeup brand born out of the country of a thousand islands. A sibling to sunglasses brand Sunnies Studios and prescription eyewear brand Sunnies Specs, Sunnies Face sells affordable cosmetics throughout the Philippines and Asia, though its fanbase is worldwide.

It officially launched online in August 2018 with nine shades of Fluffmatte, a creamy, matte lipstick. Upon launch, Fluffmatte sold out in 10 minutes.

“Trying to start makeup, I knew we had something strong to say with our vision, but to be able to get the type of formulas we wanted at the price point we wanted. I would sit back and be like, how are we ever going to achieve that?” said Georgina Wilson, one of five Sunnie’s Face cofounders who is half-English, half-Filipina. “We had over 2 million hits in the first 10 minutes [of launch]. We sold out, crashed, all of the above within those 10 minutes.” 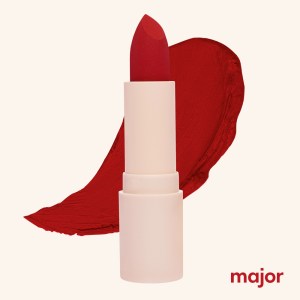 Affordability has been in the DNA of Sunnies Face from the start. Sunnies Studios, which was founded in 2013, offers sunglasses priced from $35 to $45. Founded in 2016, Sunnies Specs offers similarly priced prescription eyewear.

“It was a product that cut across classes in the Philippines,” said Wilson of the sunglasses. “The rich would buy 15 pairs and other people would have to save up, but at the end of the day, they’re all wearing the same product. That, to me, is powerful.

“[The Philippines is] very classist,” she continued. “If you’re not competitive pricing-wise, you just won’t exist. There’s a small luxury market.”

Fluffmatte is priced at 345 Philippine pesos, or just under $7.

Sunnies Face has since expanded color categories with a whipped matte lip cream called Lip Dip, a cream-to-powder shimmer stick called Glowboss, a brow pencil called Lifebrow, and a sheer cheek tint called Airblush. All of the products are priced under $15 and are paraben- and cruelty-free.

Wilson and her cofounders are the sole owners of the company, which hasn’t taken on any investment. “We have no pressure to do anything,” said Wilson. “We do whatever we want and that freedom and flexibility is so important.”

As of 2019, Sunnies Face has 20 store locations and just launched in China via Tmall. Sunnies Studios and Sunnies Specs have a combined 130 store locations. There are plans to open 35 more stores across all brands in 2020, including expansion in Australia and China.

Despite operating mainly in the Philippines, Sunnies Face has a global audience. On Instagram, the brand counts 347,000 followers and often shares images of influencers and celebrities such as Kate Bosworth, Olivia Wilde, Elsa Hosk and Rosie Huntington-Whiteley wearing its products.

On Dec. 10, Sunnies Face will launch its first collaboration with Huntington-Whiteley. The model will select her favorite products and sell them on her web site.

Sunnies Face works with factories throughout Asia and Europe and is currently in talks with ones based in the U.S.

“With makeup, different regions have different specialties,” said Wilson. “It’s important to represent the new wave of Asia. When we started, we were so internal-looking. We were looking within Asia, within the Philippines and saying, ‘We need to make the best stuff for these people.’ We still are, but now, six years later, we need to represent our region in the best way possible. We are always making sure we speak to different markets.”

The race to capture an Asian audience is on for fashion and beauty companies alike. Western brands are eager to make an impression on the region, but, as recent controversies have shown, they’re often ill-equipped to do so properly.

“When people speak of [how] they want to be big in Asia and they’re in the West, they don’t actually know what that means,” said Wilson. “I’ve seen it happen so many times. Another brand creates some mistake in China or something. I see it here, too. You think you can slap the same formula and just expect it to work for Asia because they’ll lap up anything that’s Western. That’s very dated. There is a big disconnect with what the West understands of Asia.”

The Philippines, too, is often left out of conversations about Asian beauty, which tend to focus on trends in China, South Korea and Japan. Sunnies Face is just one example of the creativity and inspiration bubbling in Southeast Asia. Perhaps, said Wilson, the rest of the world will soon recognize that.

“Asia for so long has been about Northern Asia,” said Wilson. “I love those countries, but there’s a huge misrepresentation of what Southeast Asia looks like. I don’t look Filipino, but I am Filipino. It’s time the rest of the world sees what this region has to offer.”

Manny Mua on His First Product Collaboration With Morphe

Gigi Gorgeous on YouTube, Beauty and How Brands Can Do Better