Telemedicine is creeping into the beauty world, through brands like Apostrophe and Musely, which aim to connect consumers and dermatologists.

Ingestible and topical products from Apostrophe.

Access to dermatologists has never been easier, thanks to an influx of telemedicine companies in the beauty world.

One of them, Apostrophe, has just raised a $6 million seed round led by Signal Fire, with additional participation from FJ Labs.

The business, which focuses mostly on acne treatment, has re-branded from its original “YoDerm” name, and aims to create a vertically integrated specialty pharmacy with the influx of funding, according to cofounder Ben Holber. In addition to acne, the company’s dermatologist network provides treatment options for eyelashes, hair loss, wrinkles and rosacea.

Apostrophe is one of several brands linking beauty and telemedicine.

There’s also Musely, which through new telemedicine segment Face-Rx provides prescription antiaging skin care to customers after an online consultation. And then there is Hims and Hers, which connect Internet-savvy consumers to prescription skin care, in addition to a host of other health and beauty products.

The idea behind all of them is similar — to democratize access, particularly to dermatologists.

The professional global skin-care market was about $8 billion in 2018, according to data from Kline. The U.S. segment is growing the fastest, and accounts for more than 25 percent of total sales, Kline data showed.

“We had the insight that you could visually diagnose a lot of dermatology where you didn’t have to be in the same room. The idea was…if you could do these online visits, you could greatly increase the access for people and democratize that access,” said Holber.

“It’s an area that kind of straddles the cosmetic and medical side. There’s not necessarily a place for people who want to pay out of pocket, as opposed to going through insurance.…By having this be entirely out of pocket and there being more discretionary income in the space, consumers are more open to it,” Holber said.

Apostrophe will also use the funds to expand the team and increase its patient base, which is mostly made up of patients between 20 and 40 years old, via marketing, Holber said.

The company is doubling down on its own pharmacy, where it can “specialize the pharmacy specifically to providing affordable, highly effective medication,” Holber said. Apostrophe does have an operational pharmacy now, but partners with other mail-order pharmacies to make sure clients don’t have to step foot in a drugstore. 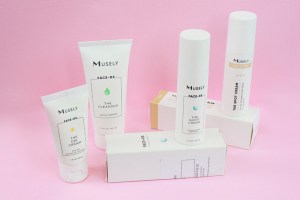 Musely, which began as an online beauty content site before branching into e-commerce, has also expanded into telemedicine. In October, the company launched Face-Rx, a telemedicine service that matches customers with board-certified dermatologists who can access their skin and create personalized treatment plans. The brand also has an eNurse app that aims to track progress, and help consumers if any skin issues come up.

According to Musely chief executive officer Jack Jia, the move into telemedicine was prompted by lack of efficacy in commercially available products. “What we found is that even with all these different entrepreneurs and different secret formulas, none of them really makes a big impact for skin-care needs. They smell good, they have natural and organic ingredients, they may be good moisturizers, but fundamentally, we didn’t find anything that materially could improve people’s skin, especially around aging,” Jia said.

Prescription plans, which last for about two months and include custom formulations of Tretinoin and Hydraquinone, generally run between $60 and $80, according to the brand.

Face-Rx aims to target Gen X consumers, rather than Millennials, because that’s where the antiaging need is, Jia said. So far, Face-Rx is growing quickly, he said.

“It’s only been a few months, but it’s growing extremely fast. And largely just because people didn’t think there was actually a skin-care medication that could transform them,” Jia said, noting that Face-Rx targets consumers who either haven’t gone to an IRL derm or who would go for more “medically critical” issues, but not for skin care.