How to Glam Up the Designer Fragrance Category Again

PARIS — JW Anderson captured the most attention on Instagram among all the fashion designers in New York, London, Milan and Paris during the most recent fashion season, according to a study from Heuritech.

There was a time in the not-so-distant past when a hot designer like him would certainly have had a signature perfume business, but that’s not the case for Anderson—or a constellation of young stars in the industry today.

Designer fragrances have had a storied history. Paul Poiret became a perfume entrepreneur in the early 1900s, while Gabrielle Chanel in 1921 introduced Chanel No. 5. Christian Dior started his storied perfume business with Miss Dior in 1947.

Fast-forward and Yves Saint Laurent came out with Y in 1964. Norell, in 1968, “hit American department stores like a bomb,” said perfume expert Michael Edwards. Halston by Halston launched in 1975. “In its second year, it made more money than the whole of Max Factor USA,” said Edwards.

“Then came Opium in 1977, the blockbuster,” he continued, referring to the YSL launch that channeled the brand’s essence of excess—with everything from its provocative name, juice, advertising, bottle and launch party one year later on a boat moored in New York’s South Street Seaport, where vessels loaded with opium used to arrive from Asia.

In the Eighties and Nineties, alternative designer fragrances whipped up a lather of excitement. Alongside the stalwarts like Chanel and Dior, a bastion of new fashion names popped up in unexpected ways, becoming bestsellers and ultimately classics.

In 1992, for instance, Issey Miyake introduced L’Eau d’Issey, meant to reflect the smell of water, coming in a never-seen-before cone-shaped bottle. That year also, Thierry Mugler’s Angel shot into the scene, with its gourmand fragrance and star-shaped flacon. And in 1993, Jean Paul Gaultier’s Classique broke all the codes, contained in a bust-shaped bottle and tin-can outer packaging.

Such scents were found front and center in retailers, which today have largely scaled back shelf space earmarked for designer labels, giving more room to niche perfumes instead.

“Saks Fifth Avenue’s fragrance business has really been focused more on the haute parfumerie, the niche fragrances, over the years,” said Kate Oldham, senior vice president, general merchandise manager, beauty, jewelry and home, at the department store. “But we have seen this resurgence in brands like Chanel, Dior, Armani and YSL—designer brands—during these last few months of the pandemic. People are seeing value in brands and names they trust.”

Some industry experts attributed the rise of niche scents to how risk-taking on product development can be scaled down after designer fragrance brands become acquired by big groups, especially publicly quoted companies. The experts also pointed to the fact designer fragrances have been frequently discounted.

“Over the last 20 years, what were once the venerable, inspirational and aspirational brands have become commodities,” said Edwards.

“The designer fragrance market is hugely relevant to the broad industry of fragrances,” said Gabriella Beckwith, senior analyst of beauty and personal care at Euromonitor International. “Six out of the top 10 fragrance brands globally are considered designer fragrances, with Chanel in the lead, followed by Christian Dior, Paco Rabanne and Giorgio Armani.

“However, more recently these luxury players have faced rising competition from other high-end brands, particularly as premium unisex fragrances gain momentum—notably players such as Jo Malone, Le Labo, Kilian and Diptyque,” she continued.

Of Nineties designer fragrances, Eric Henry, founder of the brand-building consultancy EH4B, said: “They did bring much more growth, compared to the niche fragrances, which are bringing limited growth. There is no comparison.”

No wonder then the multinationals keep snapping up designer perfume brands. L’Oréal last year acquired Thierry Mugler and Azzaro from Groupe Clarins. Those two brands together in 2018 generated about 340 million euros.

In the recent past, perfume licenses for Valentino, Jean Paul Gaultier and Prada have changed hands, too.

The big fashion fragrance brands remain successful because they’ve been nourished over the years with newness, according to Henry.

Joël Palix, founder of boutique consultancy Palix Unlimited, pointed to how for established fashion labels reintroducing products from their past can be a good means to tap into consumers’ desire for retro products.

“When big brands are exploring their patrimony they find some treasures, and that’s a way to launch niche brands within large brands,” he said.

“There are some things that change and some that we have to keep as fundamental in the category,” said Vincent Thilloy, chief brands officer at Puig for Paco Rabanne and Jean Paul Gaultier. “It is also the way we move more from story-telling to more story-selling.”

Among the steadfast elements is the need for a strong fragrance, packaging, overall concept, point of differentiation, creativity and innovation.

“Designer fragrances, in the end, are not different from any other fragrances,” said Ana Trias Arraut, cbo of Carolina Herrera, Dries Van Noten and Nina Ricci at Puig. “The most important thing is getting the desire of the consumer right.”

A focus on digital and starting to talk about brands’ environmental and social policies have been key, too.

So what else can be done to reboot the designer fragrance business, such an important piece of the perfume industry, which has been trailing the skin-care category in terms of sales growth over the past few years and is hard-hit these days due to the coronavirus pandemic that has shut down retailers around the globe for significant periods of time?

In 2021, the tracking firm expects fragrance sales to rise on-year by 4.5 percent, whereas makeup revenues should be up by 5.7 percent and skin care’s by 8.7 percent.

Steve Mormoris, chief executive officer of Edge Beauty, an incubator for emerging brands to create scenting, said the monolithic designer fragrances are mainstays people have grown up with and are part of the cultural fabric.

“They are here to stay,” he said. “They’ll remain relevant, because they’ve already established a tradition of olfactory excellence.”

But emerging designers and “sleeping beauty” brands like Balmain, Bottega Veneta, and Alexander McQueen, all of which set runway trends but have practically dormant fragrance brands today, might be hard to awaken.

“They need not only to make a revival with interesting product, but to launch newness—and retail is not so open to newness today, because during COVOD-19 [stores] don’t want to take any risk,” said Henry. “So it’s not the best timing.”

“Inter Parfums just signed Moncler, but Moncler is a very big brand nowadays,” said Palix. “It’s pretty hard for a young designer to find a fragrance company that is willing to gamble on a name, the way Clarins gambled on Thierry Mugler in the Eighties or BPI gambled on Narciso Rodriguez or L’Oréal on Viktor & Rolf.”

“If you take a hipster brand or an urban brand, it’s hard for consumers to imagine the association with fragrance in the traditional sense,” he continued. “Whereas with a classic brand like an Yves Saint Laurent, someone will associate the eau de parfum with fashion in the sense that it’s another invisible accessory. So there’s a paradigm shift in that the type of fashion brands coming out now are more casual and sort of freeform, a world or universe that’s not necessarily associated with fragrance.”

Mormoris deems more creativity needs to be used to rerender fragrance into something other than a juice in a glass bottle with a spray and actuator, “which harkens back to a previous generation of more formal fashion and seduction. The form of fragrance should migrate more toward what I call the word ‘scent,’ where brands are extending into forms of scenting that are not necessarily linked to seduction, but elicit feelings of confidence, wellbeing, individuality, signature.”

Those include soaps, mists—like for the hair and body—and products with some skin-care benefits.

“The onus is on the new fashion brands to think more creatively and broadly about what scenting is and how it relates to their brand,” he said.

“There are some young, cool brands that if they had a product that was a disruptor in the industry, our consumers would absolutely relate to that,” said Oldham. “It needs to be a reflection of their brand essence—not just a packaging of a new scent. People are looking for [what’s] unexpected.”

A host of hot designer labels out there don’t yet have a scent, including Y/Project, Rokh, Lemaire, Ami Alexandre Mattiussi and Gabriela Hearst, with some opting to team with brands in other categories, such as sneakers or fast fashion, to offer accessible entry points into their universes rather than perfume. 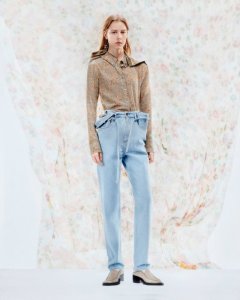 Depending on a young brand’s DNA, the power of social networks can help them enter the fragrance category.

“You can do something very interesting, capitalizing on that community,” said Thilloy. “This community becomes your ambassador. There are some great opportunities to do something [for instance like an] exclusivity with a retail partner.”

“Collabs are an interesting model,” added Palix, noting that a brand such as Supreme could ink “a partnership with Amazon or Instagram—why not—and invent a new model.”

That might entail coming out regularly with limited-edition scents that become mainstays if they work well.

“I am still convinced there are opportunities,” said Henry.

Up-and-coming fashion talents are among creative types willing to wade in the perfume world.

Kenneth Ize is among them. The Nigerian designer said he is intrigued that the smell of something could actually capture his essence and the African culture.

“We are very tropical, also very exotic, and that could come in a very sexy form,” he said.

Before creating a sent, Ize would like to travel around Africa for inspiration and research. He’d not be averse to licensing out his fragrance business, the way a fashion brand generally enters the category today, although he’s never actively pursued a perfume deal as his label is still small.

“I don’t believe in owning everything,” he said.

Gauchère’s artistic director Marie-Christine Statz said she would love to create a perfume for her brand, too. 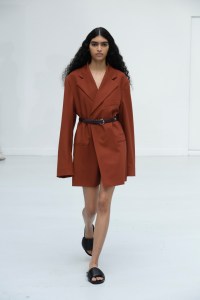 A fragrance to me is very personal and gives the opportunity to touch people on another level,” she said.

“It was the first time I worked with a scent, and it worked really well,” she said. “I believe it enriched the experience of the défilé.”

A fragrance for Gauchère, she believes, “would need to be distinctive and reflecting the mood of today while aiming for timelessness.”

The designer said she’d consider a fragrance license, but that “a partnership or collaboration between brands can create something beautiful if it supports the culture and the identity of all partners involved.”

Yet collaborations are another way some fashion brands have recently delved into fragrance. Off-White’s Virgil Abloh, for instance, joined forces with Byredo’s Ben Gorham on a perfume called Elevator Music two years ago. Marine Serre linked with État Libre d’Orange.

Thom Browne dipped into the world of fragrance for the first time in October 2019 with a collection of six scents based on vetiver notes created directly with perfume supplier Givaudan.

But not everyone is game. Isabel Marant, for one, has said point blank that she doesn’t like perfume.