The app will allow Il Makiage's microinfluencer pool to earn commission from products customers buy from their profile pages.

Il Makiage is making a technology play — one that doubles as a play to microinfluencers.

The makeup artistry brand relaunched in the U.S. last year with an $8 million marketing campaign that included a series of pop-ups designed by the late Zaha Hadid and billboards declaring the minimalist makeup trend dead. For the past three years, Il Makiage has simultaneously been building an in-house, 25-person technology team, tasking them with creating the brand’s recently launched artificial intelligence PowerMatch foundation quiz, which has since been taken by more than 2 million people.

The latest from Il Makiage’s tech lab is two-pronged, spanning both an app, Kenzza, and a web site redesign, which simultaneously go live today, July 10. 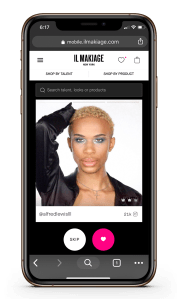 “We already have great products, [so we thought] we could allocate our leadership attention and resources in the past two years to create strong tech tools,” said Oran Holtzman, chief executive officer of Il Makiage. “Most of the web sites in beauty have very high bounce rates, very low time on site and [the] overall experience is very not engaging — unlike in stores, where the experience is so engaging. We think that both experiences are not treated in the same way. This is what we are trying to solve now.”

Starting July 10, Il Makiage’s web site will include a Tinder-like feature that allows visitors to swipe right (if they like) or left (if they don’t) on a total of 400 beauty looks created by 200 influencers — all without creating an Il Makiage web account. The feature, said Holtzman, uses visitors’ IP addresses and machine learning to collect and interpret information about their makeup preferences. These insights can only be lost if a user clears his or her browsing history.

The web site redesign also comes with the announcement of Il Makiage’s try-before-you-buy makeup program, which will allow customers to choose up to four beauty products to try at home over the course of 14 days. Customers pay a shipping fee and are charged for the products only if they fail to return them after the two-week window. Think of it like Rent the Runway, but for makeup. 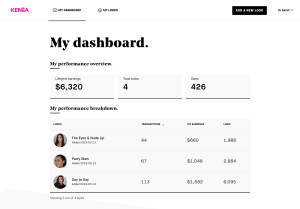 The second part of Il Makiage’s tech rollout is the announcement of an influencer app, Kenzza.

“Another challenge that exists in [the makeup] category [is] microinfluencers,” said Holtzman. “They are working so hard, dedicating their life to content, [but] no one pays them. So we said, let’s create another platform which will be a win-win.”

As part of the launch of Kenzza, Il Makiage has expanded its influencer program by 200 microinfluencers, including Alfred Lewis (@alfredlewislll), Diana Choi (@p.s.kaguya), The Vike Twins (@theviketwins), Ilianna Ayala (@beautymarkedilly), Kendra H (@kissedbyken) and Sarita Nauth (@saritanauth). Il Makiage sends products to its microinfluencer pool, inviting them to create video content around the products. The influencers are then able to upload their videos to Il Makiage’s Kenzza platform, where they can input specifics about the products that appear in their videos. The incentive for doing so is the chance to earn commission — up to 25 percent — from purchases made off of their profile pages.

“We are launching [Kenzza] with Il Makiage because it’s ours, but in the near future, we are envisioning licensing the platform and we will continue to manage the influencers because we want to make sure they are being treated in the same way we are treating them now,” said Holtzman. “We will generate content through Kenzza to other brands in other categories.”

Il Makiage is a 100 percent direct-to-consumer brand. It is on pace to finish 2019 with well over $50 million in revenue, as reported by the company.

Are Microinfluencers the New Favorite Child?