Five years after she started her YouTube channel, vlogger Kathleen Fuentes (aka Kathleen Lights) still buys her own makeup.

It’s part of how she maintains her authenticity with an audience that’s been with her for years — from the dawn of her YouTube channel in 2013 through the launch of her nail polish line, KL Polish, in 2016. Shades of KL Polish, which will release its ninth collection in June, are often inspired by makeup products that Fuentes uses in her YouTube videos. 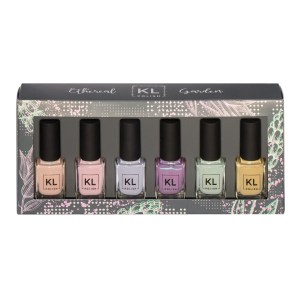 “Makeup actually inspires a lot of my nail polish,” said Fuentes. “Charmed, the duochrome, [was inspired by] a Stila Liquid Eyeshadow … Shimmery colors and ones like that I get really inspired by makeup.”

Fuentes’ ninth collection, for summer, is inspired by Cuba. It comes at a point where she’s working to grow KL Polish into more than just a nail polish brand — she’s planning to launch into other categories later this year. Now sold online only, KL Polish is also in talks to land retail distribution, expected in the next few months.

“I want to branch out and do things related to nail care — hand care — things like that,” Fuentes said. KL Polish is also planning to expand its Lips N Tips franchise, which matches nail polish to Fuentes-created lipsticks.

Those followers, who count more than 3.7 million on YouTube, 2 million on Instagram and nearly 600,000 on Twitter, are the main customers for KL Polish, according to Fuentes. Industry sources say the brand has sold more than 600,000 bottles of nail polish and done more than $5 million in sales since its launch, and is projected to grow 50 percent in 2018.

Fuentes’ followers are also critical to her business process. “She literally will ask people, ‘Hey, I’ve got this cool color, what do you think I should name it?'” said Melody Hammer, KL Polish’s chief creative officer.

Fuentes sat down with WWD to talk about her influencer rise, shopping habits and becoming an entrepreneur.

K.F.: In 2013. It was not really [a thing then yet] — people were sitting in their rooms on the floor. I feel like I got there right at the cusp before it started getting really insane. It was very chill back then — YouTube was not what it is now.

WWD: Is the way you film today different than when you first started?

WWD: How much do you talk to them?

K.F.: Twitter is mostly where I interact with them, but I respond to a lot of people on YouTube — I’m constantly responding. My recent videos I’m responding to people for, like, the first three hours nonstop.

WWD: How did you decide you wanted to have your own business, and after that, how did you figure out how to manufacture nail polish?

People, after a while, asked me, “Oh my god, you know so much about formulas and you review so many things, why don’t you create your own because we feel like you would target us better because you know us so much.” I just didn’t want to jump into makeup because I felt like that was going to be a conflict with my channel, so I decided to do nail polish instead.

WWD: You have two different channels — one for you and one for the brand — but you do cross-promote. Do you ever worry about pushing product?

K.F.: Yeah. That’s why usually I post Mondays, Wednesdays and Fridays, but I didn’t want to be too pushy with nail polish and shove it in their faces, so I upload nail polish videos on Tuesdays and Thursdays, so it’s an extra bonus video I do. 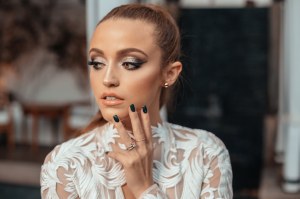 WWD: Did you worry about launching a business as a trusted adviser to your subscribers?

K.F.: Oh my god, yes. And I feel like, because of that, I’m under a microscope and people really criticize every single aspect of everything when it comes to KL Polish. I feel like people don’t understand it’s new for me, I’m trying to learn as well. People think, “Oh, you’re Kathleen Lights, you have to have it perfect.” It is a little difficult, but I feel like it’s pretty good and we get a lot of great feedback.

WWD: How do you think of new videos to shoot after five years?

K.F.: It’s hard. I’m constantly getting asked to do tutorials and I’m like, “What else can I do?” I have like 600 tutorials on my channel at this point. But thankfully as new launches and new things come up, there’s always a new topic to discuss on YouTube.

K.F.: Anything with Kylie Jenner or Kim Kardashian, anything that looks outrageous — those are usually the poppin’ beauty videos.

WWD: In your real life — like now — you’re wearing makeup but it’s not crazy aggressive or blue eyeshadow. Is this your day-to-day makeup?

WWD: What about skin care — are you into it?

K.F.: Oh, yeah. I’m super into skin care. I love Drunk Elephant and Tatcha. Those are my two favorites. Skin care is way more important to me. I try not to pack on so much makeup.

WWD: Do you have any go-to products that have been your favorites for a long period of time?

K.F.: I usually post either swatches — anything I get from p.r. — I’ll post swatches or pictures of me in makeup and I’ll put the details below. I mainly use it for makeup and things like that. Nothing personal. I’m not super amazing at Instagram. I feel like I need to up my Instagram game.

WWD: Where is the line between what you’ll share and what you won’t? Danny has made his fair share of appearances in past videos.

K.F.: In the beginning, I used to share a lot and then I realized the more I grew the more critical people can get and I pulled back a lot within the last year and a half. I don’t show any of my personal life anymore.

WWD: Do you respond when people are being rude?

K.F.: I feel like what you have to do is look at that comment, recollect, and go look for a good comment and respond to that one. It’s kind of messed up when you get, “Oh my god, Kathleen, I love you so much I watch all your videos,” and no one responds to them, and then someone says something bad and we’re responding to them.

WWD: Do you still shop for makeup?

K.F.: Online. Here’s the thing — people will get really upset when you only show products that are sent to you in p.r. Then people feel like, “Oh, you know, it’s not genuine.” So I like to buy a lot of makeup from brands that don’t know me or don’t send me stuff so people know I purchase a lot of things as well, and it’s not just free.

WWD: Where do you shop?

K.F.: Sephora, Ulta and Nordstrom. I don’t go in stores anymore. Every time I go into Sephora it kind of turns into a meet and greet. It’s like the motherland. I can go into Home Depot — perfectly fine.

WWD: Do you frequent Home Depot?

K.F.: He built my desk. My vanity — the one in all my videos. The only reason I started YouTube was because of Danny. I used to be obsessed with beauty videos, that’s all I did. And he was like, “Instead of just watching them, why don’t you do them? You’re talking about it — try it.” At that moment the vanity planet thing was really popular and I was like, “I don’t have a desk with lights,” and he was like, “I’ll build it.”

WWD: What about clothes — where do you shop?

K.F.: Online. I like Forever 21. In my description box I feel like everything is Forever 21, it’s almost embarrassing. I get those comments all the time like, “Do you shop anywhere else?” But it’s cheap and it’s cute. And I’ve gotten questions like, “You’ve worn this before.” Like, do you wear your clothes only one time? I don’t.