For two years, Katie Sturino has been fulfilling orders for her self-funded beauty brand Megababe from her parents’ garage. That changes this summer, as Megababe upgrades to its own distribution center — and expects to triple sales by the end of the year.

Sturino, a body-positive fashion influencer formerly known as @The12ishStyle on Instagram, launched Megababe in summer 2017. The brand launched with just two products, both of which aim to ease body-discomfort issues rarely addressed by the beauty industry: Thigh Rescue, $14, a stick that addresses thigh chafe that sold out in one week on Megababe’s web site, and Bust Dust, $16, an anti-boob-sweat spray that sold out in three weeks. 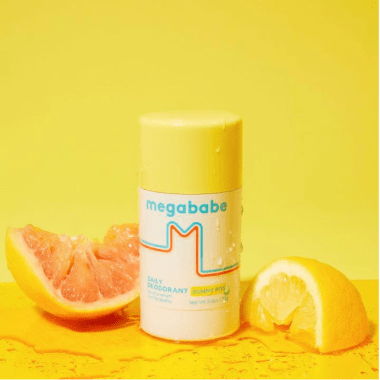 “It’s definitely a white space in the industry,” said Sturino, whose recent wedding was documented in The New York Times, of her brand. “[I’ve] been told that by Ulta, Target, by people who have seen beauty forever and who were impressed that we were able to find this new category. That’s the basis of the company.”

Both Ulta and Target now carry Megababe: the brand is available in 1,100 Ulta doors and will be in all Target stores by Sept. 15. Thigh Rescue continues to perform in the top 1 percent of the 20,000 stockkeeping units available on Ulta.com.

Born out of Sturino’s lived experiences, Megababe turns taboo body issues on their head with products that are natural, toxin-free, chic and shameless. Thigh Rescue continues to be a best-selling product on the web site, with Rosy Pits, a natural deodorant that launched last summer with a 13,000-person wait list, close behind. Rosy Pits sold out instantly when it launched on Megababe’s web site; it later launched in J. Crew, where it sold out online in eight minutes.

Megababe quickly found an audience in Sturino’s social media following, which is 95 percent female, ages 25 to 34. It has also grown an audience of its own, counting 60,000 followers on Instagram.

Sturino herself has 324,000 Instagram followers, many of whom know her for popularizing the hashtag #MakeMySize. The hashtag-turned-movement allows Sturino to raise awareness of size-inclusivity among fashion brands that don’t make her — or her followers’ — sizes.

“Make My Size makes people feel seen and it makes them feel less alone,” said Sturino. “You get it from all sides. You get it from brands, from bloggers, because the brands are like, ‘Oh, I didn’t know that.’ I try not to put people on blast in a negative way. I try to talk to companies I like, whose clothes I want to wear, [who] do a good job with design. I don’t go into somewhere I wouldn’t want to shop.”

The hashtag is tagged more than 4,000 times on Instagram. It has inspired Sturino’s followers to share their own versions.

In addition to advocating for size-inclusivity online, Sturino consults with brands — including Veronica Beard, Stitch Fix, Madewell and Reebok — off-line on how to expand their size range “the right way.”

“I don’t fault people for doing it wrong, but I think a lot of brands that do launch plus-sizes or extended sizing don’t actually talk to anyone who wears extended sizing,” said Sturino. “It’s like me trying to market to a man. I have to talk to actual men to understand what to say. Otherwise I’m like, ‘take this to your hockey game!’ Like, I have no idea.”

Marketing to men is now top-of-mind for Sturino. Despite her predominantly female audience, Sturino has fielded “a lot of requests” for men’s products, and in May, she launched Megaman, Megababe’s male counterpart.

“We have a lot of women purchasing for their men because their men were stealing their Thigh Rescue or the Bust Dust and taking them,” she said. “We don’t have a retail strategy for [Megaman] yet, but we’re working on it right now.”

This summer, Sturino will expand Megababe’s offerings with the launch of shower sheets (wipes made for showering on-the-go), an underarm detoxifying mask and Beach Paint, a physical blocker made of zinc oxide that helps guard against melasma. The brand also recently launched Sunny Pits, the follow-up product to the highly popular Rosy Pits deodorant.

Asked whether she sees opportunity to expand Megababe beyond body care, Sturino said there’s still much to do within the category.

“I don’t ever see us being a makeup company, like color cosmetics. I don’t really see us ever in the hair space, the nail space — unless we’re solving for a specific problem that’s not in the market,” said Sturino. “I don’t love the idea of going into a super crowded market and doing an eye cream. That’s not why you’re coming to us. I’m trying to solve problems that do exist without a solution.”

WATCH: Influencer Camila Coelho Takes You Inside Her Fashion Label