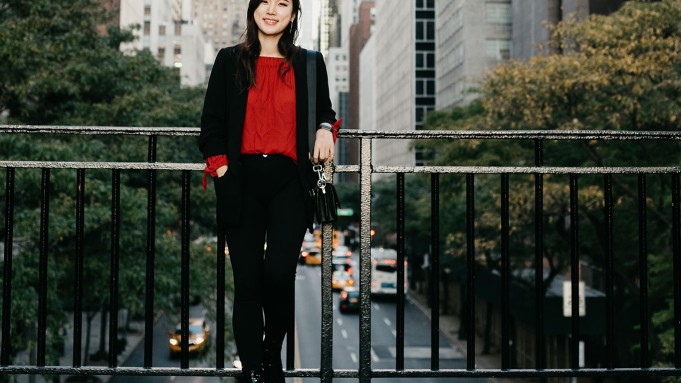 Liah Yoo is South Korean and her products are formulated in South Korea, but don’t call her new skin-care line, Krave, a K-beauty brand.

The vlogger, who specializes in skin care on her YouTube channel “Yellowy Cream,” is about to introduce a range of what she called “functional skin care.” Her take on beauty is less is more — a stark contrast to the 10-step South Korean skin-care routine.

“I really wanted to strip it down to the basics and start from a minimal range,” Yoo said in an interview during her most recent trip to New York. “As a consumer, a lot of young customers start to apply more and more [products on their face], causing more inflammation, chronic skin disease or never curing acne or redness. There’s a fundamental issue in the skin-care industry.”

That’s why she opted to introduce an initial Core Series of “basics” and a Supplement Series, launching just one product from each group to start: a cleanser (Core) and an exfoliator (Supplement). These both go on sale at Kravebeauty.com on Dec. 12. A third product — a sunscreen she’s still perfecting that will fall into the Core Series — will be released in the spring.

Yoo has a clear point of view — she wants to break the conventional skin-care routine promoted by beauty giants “creating products just to sell more rather than thinking about our skin health” — and is not afraid to call out the multibillion dollar beauty industry. She worked at AmorePacific for two years before committing to vlogging full time, which is where she “got the scoop of what the real beauty industry is like.”

One of the biggest issues she found is that many South Korean brands offer a range of products that share a hero ingredient, but there is actually little difference between products, save for texture or the sensorial experience.

“These brands are just recommending you use more steps when you probably can use one of the five products to have the same efficacy out of the key ingredient. This is causing far bigger issues,” Yoo said of skin-care regimens that have become far “too complicated.”

This is reflected in her content, which focuses on skin biology instead of product recommendations or hauls. Videos such as “Skin Barrier 101” — a tutorial on how to “respect your skin” — and “Why Your Acne Treatment Never Works” populate her YouTube page, and according to Yoo, resonate with Gen X and Millennial followers, many of who are struggling with skin concerns of their own. She has eschewed the typical beauty vlogger topics in favor of an educational approach rooted in science because, for her, skin-care content needs to be treated differently than makeup. She believes firmly that influencers must be cognizant of the ripple effect that even a single post could cause — and the health of one’s skin is serious business.

By taking one look at her branding and packaging, it’s obvious who Yoo is speaking to: a nearly 370,000 YouTube subscriber base where more than 80 percent of her audience falls between the ages of 18 to 34, with almost half ranging from 18 to 24 years old.

It’s hard to scroll Instagram without photographic or video — or Boomerang — evidence of someone drinking a matcha, or at least a mention of their matcha (“I needed this so matcha”) — and Yoo’s collection feeds right into this. She decided to tap into a host of Internet-buzzy ingredients that are closely tied to wellness to formulate her first products: a barrier-friendly Matcha Hemp Hydrating Cleanser, $16, and Kale-Lalu-yAHA, $25 skin resurfacing exfoliator with alpha hydroxy acids.

“I’m incorporating some more honest guidance. A lot of times brands would communicate with customers to apply glycolic acid toner everyday, which is damaging the skin in the long term. It’s going to give you a short sprint of results if you use everyday, but that’s not recommended,” Yoo explained. “What we can do to feed our skin what it deserves, or craves, is give it the most vital nutrients, like antioxidants. I think everyone can benefit from them….Antioxidants and essential fatty acids are the base for a lot of products, and I’m using and cocktail-ing them with skin replenishing ingredients such as hyaluronic acid or panthenol.”

In the works is a barrier remedy intended to target those who have ruined their skin barrier by overuse of skin care and strong active ingredients such as retinol or AHAs every day. Yoo pointed out that many suffer from varying forms of dermatitis, and this is all related to skin disruption.

For instance, because Yoo learned that the biggest issue her fans have with sunscreen is that they believe it causes breakouts, so she’s developing a “non pore-clogging” sun protectant with hybrid chemical and physical UV filters.

The focus on skin health comes from Yoo’s own struggles with her skin, which took years to get under control.

She was candid about poor eating and lifestyle habits in her early- to mid-20s that contributed to a complexion that in no way resembles the clear, glowing skin Yoo has today. She whipped out a picture of herself from two years ago where her skin was badly broken out, and maintained that this was the case for about five years. But more than diet, Yoo maintained that her poor skin health was a result of product overload and specifically, “really strong conventional acne treatments” including antibiotics, benzoyl peroxide and mattifying lotions. Despite seeing a dermatologist regularly and adhering to a routine that at one point had her using more than a dozen skin-care products at once, there was no improvement.

“My skin barrier was completely disrupted and I guess what my skin was trying to say was ‘chill out,’ but I wasn’t listening to my skin. You hunt down the ‘magic pill’ of skin care and then you accumulate more products because you’re so desperate to treat it,” Yoo said.

This is when she began to investigate and study skin biology instead of just learning about what the product does to one’s skin. She pared down her regimen to just three steps — she cleansed, moisturized and applied sunscreen — and coupled with being more in tune with living a healthy lifestyle, saw her skin start to clear up.

“I completely ignored how smart our skin is naturally, and I was just using a lot of harsh products to suppress and ignore the skin’s natural barrier functions. Once I realized how smart my skin was, that’s when my perspective toward skin care changed and I learned that we don’t really need many products to maintain good skin health,” Yoo continued.

The 28-year-old’s YouTube channel, which has seen nearly 20.7 million views to date, is a built-in audience that allows her to operate solely on a direct to consumer e-commerce model without the help of a retailer. At least until Yoo really wants to scale her business, which is nearly impossible without the help of strategic global wholesale partners.

Interestingly, the majority of Yoo’s viewers are not based in South Korea, which makes up just 10 percent of her subscriber base. The largest percentage of followers hail from the U.S., comprising 33 percent of her viewership, followed by Indonesia, the Philippines and Canada. She blogs in English with Korean subtitles for local subscribers, and because Yoo has such a strong fan base in the U.S., she’s searching for warehouses on both the East and West Coasts.

Also interesting is the way she’s made half of her revenues up to this point. Instead of relying on branded partnerships, ambassadorships or sponsored posts to drive her business, Yoo travels around South Korea doing speaking engagements at college campuses and corporate organizations. She teaches social media marketing from a brand perspective and once spoke at a South Korean government event about K-beauty branding. She’s consulted for L’Oréal’s Asia-Pacific arm on social media marketing as well.

She will post the occasional sponsored video, but she’ll only do about one every three months. Last year, Yoo partnered with Unilever Asia on the Ponds brand, where she promoted their product every other month, and she’s also worked with a handful of AmorePacific brands such as AmorePacific, Laneige and Primera.

“It’s really hard for me to work with brands since I know so deeply how the beauty industry works. There’s not a lot of brands that I’d be really proud to be promoting. That really narrows down a huge chunk of it,” Yoo said. “At the end of the day, my YouTube platform is for education.…I want to keep my channel as sponsorship-free as possible if I can afford to do it.”