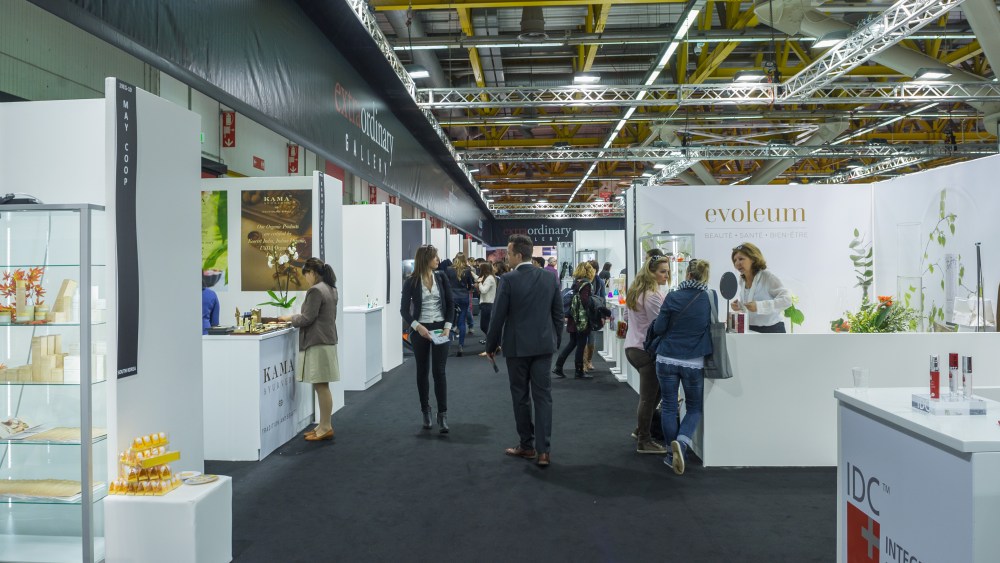 At the Extraordinary Gallery — an area reserved for cherry-picked niche brands — there was a cornucopia of newness, including:

Luca Russo believes most people don’t apply sunscreen as needed to make it work effectively — including timing the application a half-hour before sun exposure, 2 mg. of product being spread per square centimeter of skin and reapplication every three to four hours at least — so he set out to fix that with a line of sun-protective skin care, called Dr Russo.

The cosmetic dermatologist, who specializes in antiaging treatments, worked for five years on a delivery system able to distribute an active ingredient within a detergent product. It’s called Dr Russo Wash On Technology and allows the sunscreens to stay on skin after the product is washed off.

Dr Russo facial cleanser, hand soap and shower gel are billed to deliver SPF 30 once it’s used at a rate of 1 mg. of product per square centimeter of skin. The sun protection lasts three to four hours and is waterproof for 80 minutes.

Altogether he has four stockkeeping units for daytime with SPF and two night sku’s without SPF.

Dr Russo products were launched last June in Space NK in the U.K., in January through the retailer in the U.S. and most recently in Selfridges, among other stores and e-tailers.

The Slim Cera roller — simulating an esthetician’s hands — gives a lifting action to skin and increases its moisture and elasticity levels even after just three minutes, according to Keiko Suyama, international sales and promotion coordinator at Jewel Beauty, the product’s Japan-based creator.

Slim Cera’s ceramic roller heads are made with 10 different minerals, including tourmaline and moonstone, and the latest version of Slim Cera — launched two years ago — has more rollers plus solar panels helping power microcurrents to give better circulation and penetration of skin-care active ingredients, as well as create collagen and elastin, Suyama explained.

In France, where Slim Cera is sold at retailers including Le Bon Marché, Mademoiselle Bio and Buly, the first iteration of the roller sells for 190 euros, or $216.45 at current exchange, and the second version for 250 euros, or $284.75.

Haute Custom Beauty, a three-year-old skin-care company based in the U.S. that launched its tailor-made beauty rituals in November 2015, was in the Extraordinary Gallery for the first time.

“You start with a three-minute test online, answering questions about your lifestyle and face, and afterward our technology and algorithm classifies you into one of our 600 different derma profiles,” explained chief marketing officer and cofounder Cristian Méndez Sâbre

Next, the firm creates a tailor-made 30-day beauty ritual, which comprises a collagen tonic, moisturizer and a collection of 11 elixirs, which retails for 550 euros, or $613 at current exchange.

“We put everything into a specific sequence; it’s like a recipe,” he said, of the product developed and manufactured in Barcelona.

Haute Custom Beauty is only available online, but it’s looking to broaden its reach in Europe with exclusive spas and retailers.

“It’s a very specific luxury market. We are not for every type of store,” said Mêndez Sâbre, noting the firm had been receiving interest from the U.S. at the fair.

Mimesis is a Paris-based fragrance hair-care brand that launched in fall 2015.

Founders Corentin Le Men and Marion Massot met while working for L’Occitane and wanted to take the “sensual reality” of scents into the more technical hair-care world.

“The DNA of our brand is really the positioning between fragrance and hair care. It’s a new way to fragrance yourself,” Massot said.

Mimesis executives collaborate with perfumer Karine Dubreuil and formulator Catherine Taurin on the products that are manufactured in Orléans, France, and sold in more than 200 sales points countrywide.

The label’s line is comprised of four eau de parfums and a fragrance-care collection.

Mimesis will launch in the U.S. in September and will also have new fragrances by Christmas, according to Le Men.

Free Your Mane, a California-based prestige brand of hair-care products that launched about five years ago — positioned to celebrate the beauty of diversity — has recently branched into the body-care category.

Free Your Own Body is a four-unit line whose formulation includes baobab oil, billed to have strong nutrition and hydrating properties, just like the hair products.

Free Your Mane over the past year has begun distribution in Anthropologie stores in the U.S., too.

“I love this Extraordinary Gallery,” he added.

Rather than use water in its cosmetics products, May Coop product formulations contain tree or plant sap.

“The molecules are much smaller than water, so the absorption [by skin] is much better,” said Audrey Kim, executive manager of the overseas sales department at Salty Family Group, parent of May Coop.

She explained the label’s 10 products hydrate and strength skin. May Coop is sold in Sephora and Macy’s in the U.S. and Korean duty-free shops.

Cranked-up dance and electronic music plus crowds thronging jammed aisles made the nails pavilion one of the most happening places at Cosmoprof. Some standout booths there included:

Coty Inc.-owned nail brand OPI showcased its new collections, including its New Orleans line with 12 colors, which were inspired by the city’s diverse culture, Mardi Gras theme and carnival. There was also a joyful Hello Kitty line, featuring pinks, yellows and oranges.

Valentina Manfredi, marketing manager of OPI, noted that the Italian consumers tend to be more conservative, sticking with traditional hues of red and pink, but noticed increased interest in nail design.

Speaking of the nail market at large, she said: “The industry is actually booming, and more and more nail bars and salons are opening up. It started from the big cities like Milan and Rome, but now it’s actually spreading all over the [country].”

Los Angeles-based brand Orly made its debut in the Cosmoprof nail pavilion after years of exhibiting in the U.S. pavilion.

“It has driven a fair amount of traffic in the past, but for perspective distributors to see the way our [Italian] distributor Ladybird represents the brand, [this] created some unique opportunity for exposure,” commented trade show manager Cindy Cebulak.

Apart from for its newest product, which the firm kept under wraps from the public and only showed to distributors, Orly saw increased interest in its hybrid longwear nail polish Epix, which contains gel but dries in just eight minutes under ambient light.

Another defining characteristic is that the polish also has a self-leveling formula to prevent unwanted marks.

Cebulak said Orly was meeting with possible new distributors — that there was a noted increase from the Middle East, but also from Scandinavia and neighboring European Union countries.

“We had people from Germany and the Netherlands. They are all looking to add nail lines,” she said.

It’s been all systems go for the sector.

Michael Tompkins, chairman of the International Spa Association, known as ISPA, said the spa business’ sales in the U.S. had surpassed the $15 billion mark.

“Spa visits are up almost 7 percent. The number of spas grew 2 percent. Only the revenues per visit are down a bit, primarily because people get express services,” said the executive, adding he expects the sales from day spas to drop significantly in the next three years. “I think we will see more and more therapists moving into their own business from home and doing on-demand service, because they are paid higher than at a [spa] facility.”

Among the Cosmoprof Wellness exhibitors was:

Pirone noted that the first day of the fair was quiet, due in part to the public transport strike in Italy, but added the second day was picking up, thanks to visitors from Turkey, China, Israel and the U.K.

Poland, Europe’s sixth-largest exporter of beauty products, bolstered its presence in a country pavilion with more than 100 companies present. Among them were:

Quiz, which has attended Cosmoprof in Bologna for the past decade, was presenting its new brand Lamaya for the first time.

“Quiz is mass market, but Lamaya will be our premium line,” said sales and private label manager Paulina Brzozowska, who added the firm was looking to open new geographies.

“Through Cosmoprof, we got contacts in Dubai, Serbia and Bulgaria, and we are looking for customers from Saudi Arabia — the Middle East in general,” she said, noting that Asia could also be on the agenda. “At the moment, they don’t prefer makeup products but skin care, so maybe in the future it will be a good opportunity for us.”

Also looking for new distributors was Chantarelle, which specializes in non-invasive laser devices and complimentary skin-care lines for the professional use.

“We are distributed in beauty salons in Europe [including] Russia and are mainly looking for new contacts there, but are also open to new markets,” said chief executive officer Jaroslaw Alot.