Facebook and Instagram's advertisement policies are preventing female self-care brands such as Queen V, Billie, VSpot and Dame from advertising.

Feminine-care brands are hitting a wall when it comes to advertising on Facebook and Instagram. Brands such as Queen V and Billie have been blocked from running ads on either platform, raising the issue of why women's wellness isn't welcome on social media.

Feminine-care brands and the word vagina? Not OK.

That seems to be the policy of Facebook and Instagram when it comes to advertisements for feminine wellness and intimacy brands. Queen V, Billie, VSpot Medi Spa and Dame are among the companies saying their paid ads have been blocked from running on either Facebook-owned platform, often for reasons that aren’t immediately clear as they pertain to Facebook’s advertising policies.

Lauren Steinberg, founder of Queen V, a feminine-care brand that sells products like pH-balanced feminine wipes and body wash, claimed she was banned by Facebook over the summer after posting a 45-second ad that included the word vagina.

The original ad posted on Queen V’s account on June 4. By Aug. 20, it had been “disapproved” by Facebook, Steinberg told WWD. At that point, the ad had racked up 2.5 million views and 6.5 million impressions. The reason for its disapproval was not made clear to Steinberg.

“We weren’t able to figure out why,” Steinberg said, when asked why the ad had been disapproved. “Our theory was it was because there was a combination of feminine wellness products, like vaginal products, and then we had pictures that were suggestive of a vagina. The audio also did use the word vagina.”

She added that her team recently edited the ad, which replaces the word vagina with euphemisms such as “muff,” “peach,” “cookie” and “flower.” The word vagina is now used only one time in the video, which has 11,000 views on Queen V’s YouTube page. The ad has since been approved by Facebook.

This was the first time one of Queen V’s ads had been blocked from running on Facebook, said Steinberg.

“Normally, we refer to it as your ‘Queen V,’ but we were getting a lot of feedback of, ‘Your company’s supposed to be destigmatizing the word vagina and you’re not even using the word vagina,'” said Steinberg.

“It’s also really frustrating for a start-up business like mine because once an ad is up and running, it could take weeks for it to find its audience,” she continued. “Our ads did end up finding its audience and then when it was ‘disapproved,’ we had to start all over again.”

Cindy Barshop, the founder of VSpot Medi Spa, which offers an array of nonsurgical services such as vaginal steaming and tightening, said one of her ads that included the words “vagina” and “sex” was banned in September by both Facebook and Instagram.

“Anything that had to do with the word vagina was taken off,” contended Barshop, who hired a production company called Sibling Rivalry to create the video ad. “We’re blocked completely, not allowed to advertise. They just let us put something on Facebook because we convoluted the system: I opened up another Facebook account. But you can’t say the word vagina, that’s for sure.

“There’s more sex in a [movie] trailer that they promote than something like [VSpot’s video ad],” she added. 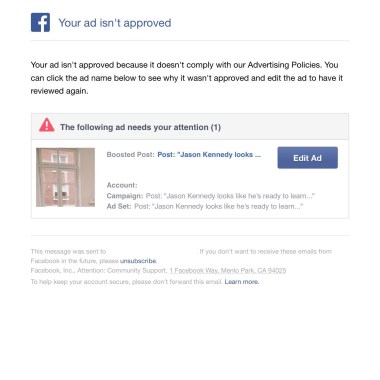 A screenshot of an e-mail Facebook sent notifying a brand that its ad had been disapproved.  Courtesy Image

On its web site, Facebook lists policies for prohibited advertisements, including subcategories for “personal health” and “adult products or services.” Personal health ads, Facebook’s policy states, “must not contain ‘before-and-after’ images or images that contain unexpected or unlikely results. Ad content must not imply or attempt to generate negative self-perception in order to promote diet, weight loss, or other health-related products.” A list of examples follows.

It’s unclear how exactly the mechanics of an ad getting banned by Facebook and Instagram work. In some cases, both platforms are OK with brands posting their campaigns to their own feeds, without paid media behind them. Promoting the posts with paid media, however, is what leads to getting banned.

Georgina Gooley, cofounder of women’s razor brand Billie, said a video ad promoting the company’s summer campaign, “Red, White and You Do You,” was disapproved by Facebook. Nonetheless, Billie was able to post the video on its Instagram feed — though it was not allowed to promote it as a paid media post. (For context, adding paid media behind a post enables it to reach a wider audience.) Billie’s video campaign shows a variety of women wearing bikinis, their pubic hair visible.

“These ads are simply disapproved based off a policy that doesn’t really take into account the whole picture and the message we’re trying to convey,” said Gooley. Billie’s campaign, which has more than one million views on YouTube, was meant to communicate that shaving is a personal choice.

“It’s almost like you’re being banned on a technical level when I don’t think they’re disapproving it in terms of the intention of the campaign or what we’re trying to communicate or celebrate for women,” said Gooley. “We have gone through other brands — swimwear brands, lingerie brands. It’s not the fact that it’s women in bathing suits or exposing skin. It’s the fact that we were trying to highlight that they had body hair.”

One source noted that Facebook’s bots are typically responsible for disapproving the ads in question. That action can then be reversed manually by a person, though the decision of whether or not to do so can be subjective.

“The person at Facebook could be hyper religious,” said the source. “You have no idea.”

Alexandra Fine, cofounder and chief executive officer of Dame, a women’s intimacy brand that sells lubricants and vibrators, said the brand spent more than $650,000 on Facebook ads in 2018. The company, which has previously had its Instagram account taken down, worked directly with Facebook on an ad that was approved by the social network, only to be disapproved two weeks later.

“I worked directly with Facebook to make landing pages about [Dame’s] lubricant and body positioning pillow, products that aren’t vibrators that are adjacent,” said Fine. “We made landing pages, we worded it in a way that Facebook said was OK, we made ads that Facebook said were OK, we started running those, we were making money again. Two-and-a-half weeks later, Facebook was like, ‘actually, it’s against the policy because eventually you can get to a vibrator [on Dame’s web site].’ So even though the ad was fine and the landing page was fine, since you still could click on ‘shop all’ and see vibrators, it was too close.”

Though some women’s intimacy brands view vibrators as a form of self-care, Facebook seems to classify vibrators as “adult products or services.” In its advertising policy for this particular category, the social media giant states that these kinds of ads “must not promote the sale or use of adult products or services, except for ads for family planning and contraception. Ads for contraceptives must focus on the contraceptive features of the product, and not on sexual pleasure or sexual enhancement, and must be targeted to people 18 years or older.”

This policy is clearly stated, though it doesn’t account for the nuances that exist within the sexual wellness category. Some female wellness brands are arguing that their product offerings, which often include lubricants and vibrators, are not in the same vein as those sold by adult pleasure brands like Adam & Eve. Moreover, why is it OK for erectile dysfunction ads to run on Facebook, but products that alleviate vaginal dryness, like lubricants, can’t be advertised, they ask.

“This discomfort [Facebook and Instagram] have around sexual wellness is harmful in a way,” said Fine. “Leading conversations, helping people find the words to be able to express their pain during sex to their doctor, to be able to say ‘no’ when they realize they are uncomfortable, to better articulate what they want from their partners, to help give them the words so we can all thrive more, yet, we’re shut down from doing that because Facebook and Instagram’s policy is such that you can’t promote anything sexual unless it is family planning or about STDs.

“It starts with erectile dysfunction because they’re saying it isn’t about sex, it’s about health: men need their erections in order to have a child and therefore it’s about functioning as a human being,” she continued. “Since we have already said that’s important for men, we have to say it’s important for women, too. That’s such an interesting way of not being sexist.”

What Is an Instagram Follower Loop? Everything You Need to Know