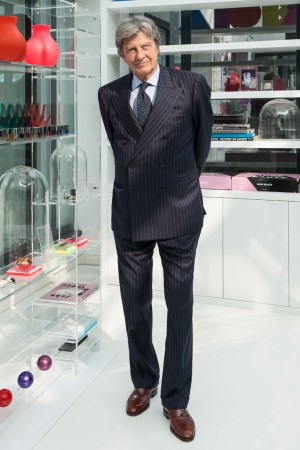 AGRATE BRIANZA, Italy — At the start of its yearly trend presentation, Intercos introduced a new area, called The Cult Zone, meant to highlight the supplier’s local presence and global vision of beauty today and tomorrow.

To satisfy its clients’ curiosity of being immersed in regions at the pulse point of the cosmetics industry these days, Intercos opted to spotlight South Korea and California using its network of beauty intelligence. There was a space, as well, dedicated to the company’s proprietary star packaging developments, such as a nail marker.

The next section was Beauty Theory that included a color collection, dubbed Empire of Color, which took a cue from hues favored by the dynasties of the imperial world. These included Chinese Rouge, Peach Blossom, Jade Stone, Arabian Nights, Indian Violet, Silk Azure, Lotus Blush and Goddess Kajal.

Intercos introduced 10 makeup concepts the supplier will launch over the coming season in a fast-paced, uber-creative film. They were organized into trends gleaned by mixing observations from fashion with marketing facts culled by Intercos’ local teams. Each related product on display wa ready for market.

• I Woke Up Like This, or #IWULT, which tapped into the ongoing “no makeup makeup trend” with transparent results.

• Aquabomb featured cosmetics imbued with water for its transformative effect on skin.

• Plantastic had products with formulations including mild yet effective ingredients to sustain skin health. For instance, there was makeup infused with ingredients for well-being.

• Climate Control included hybrid makeup meant to stand up to natural elements with extreme performance and weatherproof technology, such as humidity-proof foundation.

• Everything Glows was about products giving a fresh, healthy luster.

• Attraction involved exotic makeup and application techniques — such as calligraphy — from key parts of the Far East.

• Eye-D highlighted the rising trend of eye sculpting in 360 degrees to give cosmetic optical illusions.

The trend overview was rounded out with a glimpse of special effects Intercos has on offer, dubbed Wonderlust Wardrobe. Here there were novelties including the next-generation Prisma technology with intricate detailing.

There was also the Revolution zone, created to show products whose formulas are considered game-changers, having broken technological barriers. For instance, there was the Aqua-Liscious Lip Style containing a high percentage of water for a cooling sensation and the Waterfall Stick Foundation that’s refreshing plus leaves small droplets on skin.

Following the trend presentation, Intercos founder and president Dario Ferrari sat down with WWD to discuss some key developments for the company. He called 2015 “a very good year” — when revenues gained 14 percent — despite the early part being somewhat opaque.

“We were a little bit worried about the growth, but then suddenly everything changed,” he said, explaining business turned out to be good for Intercos, particularly in Europe, the U.S. and China. (In fact, almost 50 percent of the 2016 budget had been made by year-end 2015.)

Among key changes over the past 12 months was the formation of an equal joint venture with fashion and beauty retailer Shinsegae International in South Korea, as reported.

“I think we want to become Korean,” Ferrari joked, of the nation he lauded for being fast, creative and smart in its development of concepts. “It’s only by being Korean that we can somehow win the Asian market. I think we have to learn from them.”

Intercos is building a production plant from scratch in South Korea over the year and is weighing the possibility of going public there with its Asia activity currently in a Hong Kong-based holding company.

“Beauty in Asia is considered a fast-growing industry,” said Ferrari, who added competitors are getting high multiples when going public there. “We still don’t know if it’s going to make sense for the group.”

He added: “Being listed in Korea and comparable in Korea would, from my point of view, help also an IPO in Europe or the United States.”

Intercos in Asia both sells locally and exports to Europe and the U.S. out of China, where it has three factories.

Ferrari further emphasized the ongoing influence the U.S.’s West Coast has on beauty.

“Each of them needs a different approach, different kind of product, people and services,” said Ferrari, explaining some commonalities exist among them, too, like the need for innovation and speed to market.

To help keep a finger on the pulse of what’s next trend-wise, Intercos plans to build a team comprised of people under the age of 25.

“They are working differently,” Ferrari said.