Speakers at the event agreed that 2021 will be a transitional year.

Gianluca Toniolo speaking at the fourth edition of the Pambianco Beauty Summit in Milan.

MILAN — For the first time since COVID-19 broke out globally, Italian beauty executives gathered for a physical summit on Thursday to assess the impact of the pandemic on consumer shopping behavior and company performance, as well as to outline trends.

According to Cosmetica Italia’s president Renato Ancorotti, Italian beauty sales are expected to decrease 11.6 percent in 2020, compared to the previous year when they stood at almost 12 billion euros. In particular, total sales generated in Italy will be down 9.3 percent, while exports will decrease 15 percent.

“It’s been a difficult year and just the fact to see you in person today makes me happy. But we have to be honest, this year will leave us with consequences and it will take longer than we think for us to return to the same performances we registered in 2019,” said Ancorotti, who opened the fourth edition of the Pambianco Beauty Summit, hosted by the Italian fashion and beauty consulting company in partnership with PwC at the city’s Fondazione Giangiacomo Feltrinelli location.

The executive admitted that at the beginning of the pandemic he was pessimistic about the performance of the French group’s beauty labels in the Italian market, projecting a loss of 30 percent to 40 percent for the year. But “now we forecast sales will be down 10 to 15 percent,” he said.

The travel retail channel represents a bigger issue. “When we look at the numbers in Italy we should consider ourselves lucky, compared to what is happening in travel retail,” Toniolo said. “By the end of 2020, the estimated traffic in airports will be down 65 percent, so it’s absolutely dramatic.”

In particular, according to a study presented by Pambianco consulting and M&A director Alessio Candi, global beauty sales generated by travel retail will drop 75 percent to 38 billion euros this year. “Projections show that we won’t return to sales registered in 2019 before 2024. Maybe it will be sooner in Asia, but in Europe it’s a catastrophe,” said Toniolo, also mentioning the U.K. Treasury’s decision to wipe out the longstanding, tax-free shopping scheme for foreign tourists.

“Asia accounts for about 60 to 70 percent of the beauty market in travel retail and it has started to deal with the virus since last year. Now the market there is gaining traction again but not as we expected, there are different dynamics,” said Toniolo, referring to an increasing number of services offered by retailers, such as home delivery, and legislation favoring tax-free sales in China. “In some parts of China considered tax-free, the government increased the budget for local consumers to buy tax-free by seven to eight times with the goal to keep those sales in the country and has extended the possibility these consumers have to buy tax-free up to 180 days after their travels via online purchases. This is creating an overlap between the domestic market and travel retail,” he added.

Among the incentives the Chinese government is implementing to keep sales inside national borders, the executive also mentioned “the strong will to create a tax-free pole in Hainan, an island in South China, where there’s a 360-degree project of bringing talents in, lowering taxes and creating new sales points to encourage sales.”

LVMH’s reaction is to evaluate these kinds of projects in terms of distribution opportunities as well as to reconsider marketing strategies toward a more digital approach, especially given concerns regarding interactions between consumers and sales assistants.

Toniolo additionally noted that China will replace South Korea as the first travel retail market, as next year the former will account for 38 percent of total sales while the latter for 28 percent. Currently China accounts for 33 percent of global travel retail sales, with only 9 percent of these transactions made in China.

In addition to the travel retail channel, the Pambianco study gave a general overview on how the global cosmetics industry will be affected by the pandemic.

After underscoring the resilience of the beauty sector, which has been growing for the last 20 years at a compound annual growth rate of 4 percent, Candi underscored that this crisis is unprecedented and global beauty turnover is expected to drop 25 percent to 30 percent to between 150 billion and 160 billion euros this year. In particular, beauty sales in Europe, North America and Asia-Pacific will be down 32 percent, 35 percent and 25 percent, respectively.

“This will take global sales back to the levels reached in 2009, so we will go back a decade in one year,” Candi said. 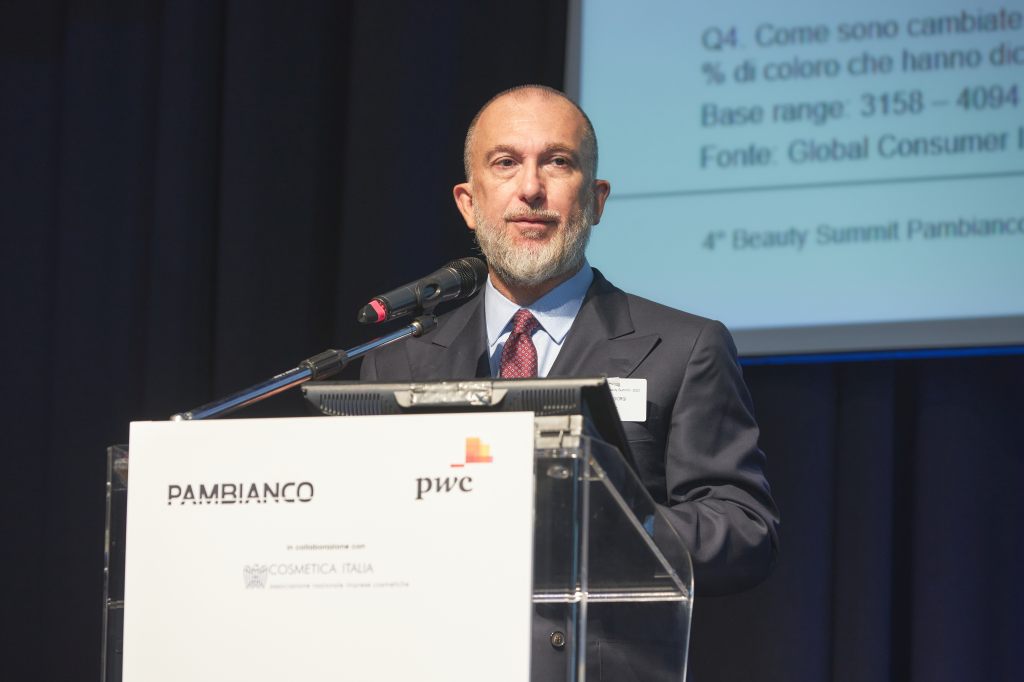 Nicola Giorgi speaking at the fourth edition of the Pambianco Beauty Summit in Milan.  Alessandro Olgiati/Courtesy of Pambianco

“We have heard about the resilience of this industry and the famous ‘Lipstick effect’ before but this is a different kind of crisis,” echoed Nicola Giorgi, senior adviser of PwC.

He presented research combining international and Italian studies, offering the results of PwC’s 11th Global Consumer Insight Survey that interviewed more than 23,000 consumers in 27 countries with data collected by the firm’s 5th Observatory on Millennials and Gen Z report.

According to this study, overall 40 percent of global consumers — and specifically 57 percent of Italian ones — saw a reduction in their incomes because of the pandemic. Therefore, interviewees stated that they will spend less doubled after the COVID-19 outbreak. In particular, 35 percent of consumers said they will reduce purchases of health and beauty products.

Yet online sales of beauty goods increased this year, especially transactions finalized through smartphones, with 93 percent of interviewees stating they will continue to use these tools in the future. While 88 percent of Millennials and Gen Z said they are inclined and favorable to buying beauty goods online, brick-and-mortar stores still account for 65 percent of the total sales generated in Italy.

“This might sound like a contradiction but it perfectly mirrors the volatile behavior of consumers,” said Giorgi, stressing the importance of revisiting the physical retail format to meet customers’ new demands. “If in the past the goal was to keep consumers in a store as long as possible, now the mission is to make their shopping experience the quickest and simplest as it can be,” noted Giorgi, mentioning self check-out systems, the cross-pollination with digital tools and VR and employee-free retail spaces.

According to the LVMH executive, as the biggest Italian cities lose tourist traffic, beauty chains and retailers located in the main towns are suffering more, while smaller stores in neighborhoods are seen as more trustworthy by consumers for their familiarity and less crowded environment.

As per Cosmetica Italia’s data, in the first half of the year, beauty sales in Italy dropped 15 percent to 4.5 billion euros compared to the same period last year, with all sales channels suffering and reporting losses, except for online. Sales there grew 40 percent compared to the first half of 2019 but accounted just for 343 million euros so “they don’t make up for the losses of the brick-and-mortar stores,” Ancorotti said. 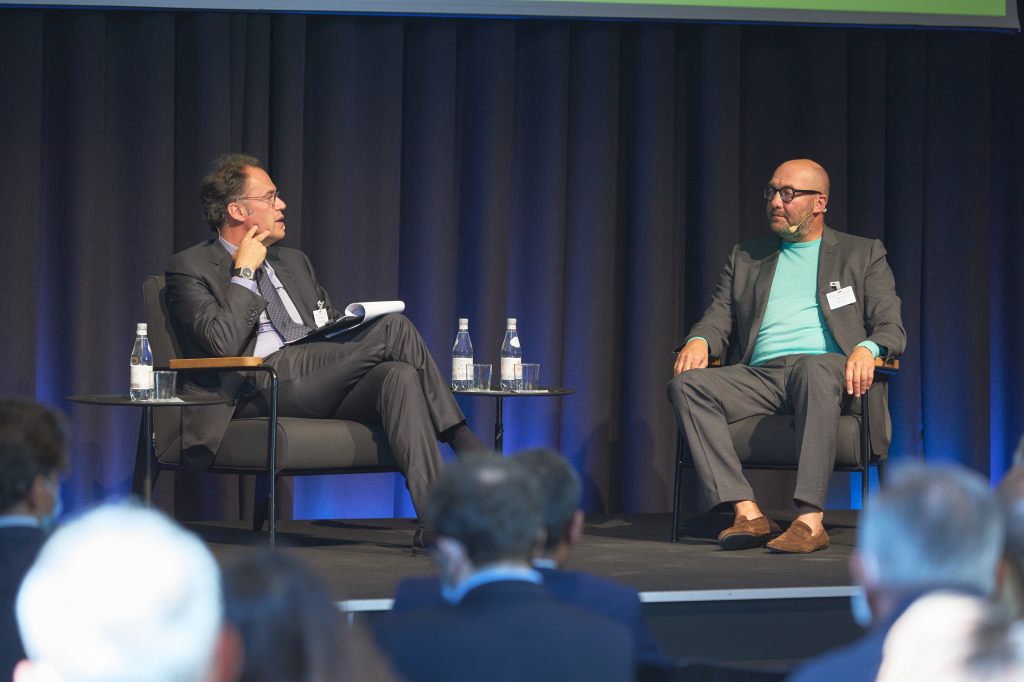 David Pambianco and Davines’ president Davide Bollati (right) at the fourth edition of the Pambianco Beauty Summit in Milan.  Alessandro Olgiati/Courtesy of Pambianco

While all speakers’ forecasts for the year in terms of revenues mirror Toniolo’s, Davines president Davide Bollati closed the summit with the most positive projection as his firm is expected to report just a 1 percent loss. Last year, the group — which owns the Davines professional hair-care line as well as the Comfort Zone and Skin Regimen skin-care brands — totaled 163 million euros in sales, with exports accounting for 79 percent of sales.

Since 2008, the B Corp company has been organically growing by double-digits each year. Bollati revealed that the business plan for the next 10 years will focus on expanding into emerging markets, opening new branches as well as further investing in skin care with the goal of making this category account for as much as the core, hair care counterpart.

Asked about possible acquisitions, Bollati said it’s “difficult to find brands that could be aligned with our philosophy of not being only profit-driven,” before admitting a penchant for 400-year-old pharmaceutical laboratory Officina Profumo Farmaceutica di Santa Maria Novella. “But Pesenti came first,” he joked, referencing the deal that saw Italian investment company Italmobiliare — owned by the Pesenti family — taking a majority stake in the company earlier this year.

During the summit, M&A activities were identified as one of the biggest trends in upcoming months. Last year, 119 beauty deals were made, while in the first half of 2020 alone there already were 46, including Euroitalia’s acquisition of the Atkinsons 1799 and I Coloniali labels and Intercos Group’s take over of its joint venture in South Korea.

“In this context, labels outdo social media as the most efficient tools to communicate information about sustainability by cosmetics companies,” said Giorgi. According to the PwC study, Millennials and Gen Z consumers expect to find the list of ingredients and their origins and manufacturing process on labels, as well as indications about how to recycle each product and its packaging and certifications to support each sustainable claim.

The research also shows that 78 percent of Millennials and Gen Z customers acknowledge “Made in Italy” as an added value when purchasing beauty goods. In particular, the number of Gen Z shoppers paying attention to the products’ origin grew 39 percent compared to last year, signaling a heightened interest for quality and safety.

“To be successful, a company has to communicate and consider its customers as partners and not as mere clients they have to sell stuff to….Only a trusted and long-term relationship with consumers can break the trap of generating sales through discounts,” Giorgi said.