Call It a Comeback: Jaclyn Cosmetics Relaunches With Highlighters

“The first launch sucked, but everybody deserves a second chance,” said Hill.

After a humbling brand debut that resulted in a social media hiatus, beauty YouTuber Jaclyn Hill has returned to the beauty scene to relaunch Jaclyn Cosmetics.

After a humbling initial launch, Jaclyn Cosmetics is back.

Jaclyn Hill has spent the past several months recovering from a brand launch that went awry — and the social media storm that followed. The beauty YouTuber launched Jaclyn Cosmetics in May with a collection of 20 nude lipsticks. The line quickly came under fire, as disappointed customers shared images of the products, some of which appeared lumpy and spoiled, on social media.

Despite the defects, Jaclyn Cosmetics sold through six months’ worth of inventory in three hours, though Hill later announced that she would issue full refunds to customers in light of the faulty products. Hill has since taken a social media hiatus-slash-mental health break and is now back to relaunch her brand. On Nov. 26, the influencer will debut her comeback collection: a line of highlighters, pressed powders and brushes that plays to her strength as an authority in the highlighter category.

For Jaclyn Cosmetics’ holiday collection, Hill turned to highlighters, a category in which she has already seen success.  Courtesy Image

“Since the beginning of the year, I’ve wanted to do a highlight holiday moment because I’m known for highlights,” Hill told WWD. “When I first announced Jaclyn Cosmetics, everybody on the Internet was like, it’s gonna be highlights, and it was lipsticks. I’m confident in this collection. My comeback could only be highlights.”

Products from the Jaclyn Cosmetics Holiday Collection are not affiliated with the laboratories with which Hill previously worked for her lipstick line. Marlena Stell, influencer and founder of Makeup Geek Cosmetics, said in a YouTube video that she had once worked with the same lab Hill used for the lipsticks and experienced similar defects.

Hill has expanded her team, adding more than 20 new people “to make sure that we do not have any more issues going forward,” she said. She has also planned out consistent launches for the next two years.

The new collection consists of the Mood Light Luminous Powder, $32; the Accent Light Highlighter Palette, $49; Beaming Light Loose Highlighter, $24; three highlighter brushes that range in price from $20 to $24 and five bundle options. All of the items will be available on the Jaclyn Cosmetics web site.

Following the brand’s debut, Hill took heat from customers and fellow influencers alike. She was “tormented and depressed” by the social media reactions, she said. She was also in a state of shock.

“At first, I genuinely did not believe it,” she said. “I remember exactly where I was sitting and I saw some stuff on Twitter and I was like, this can’t be. I was so confident that I was cocky. Then very quickly, I was like, oh my God, there are defects in some of these lipsticks.”

In the midst of the backlash, influencer-entrepreneurs such as Jen Atkin, founder of Ouai, influencer Kandee Johnson and Claudia Soare, president of Anastasia Beverly Hills, reached out to Hill. Atkin even shared a previous Ouai product defect to her Instagram page, writing, “I recently saw what @jaclynhill has gone thru with her own line and want to let her and other budding brand builders know they’re not alone.” 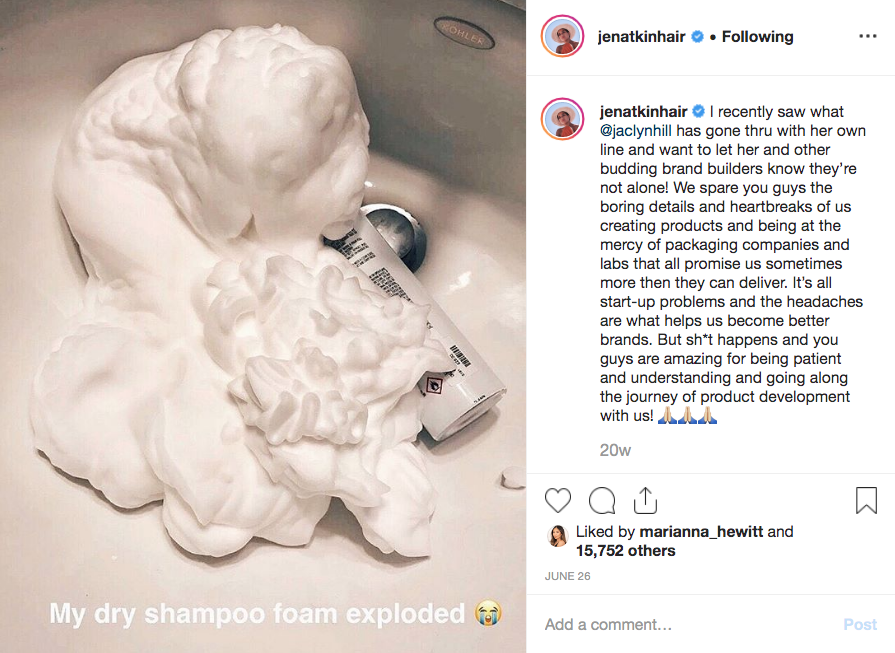 “I’m so thankful for all of the female entrepreneurs who reached out to me and lifted me up and helped me through those few months where things were so hard and I had to rebuild,” said Hill. “I’ve learned that my hand has to be in absolutely everything. I don’t want to say anything along the lines of I wasn’t involved the first time because I was so involved. But this time around, we are taking such extreme, drastic steps to make sure we are in the lab, we are watching things being created. We’re taking so many extra steps.”

The mishap not only resulted in a loss of profit, it caused Hill to lose followers — though she stopped counting how many, exactly.

“I stopped looking at Social Blade [a web site that tracks analytics on platforms such as YouTube, Twitch and Instagram] a couple months ago,” she said. “I’m probably still losing followers on a daily basis, honestly. I stopped looking because I don’t care. This isn’t a game to me. I just want to take care of my customer and I want to build my brand and my reputation the way I intended it to be in the first place.”

Those who have been following Hill for a few years know she has a history of successful makeup collaborations under her belt already. Her first highlighter collaboration with Becca Cosmetics sold out 25,000 units on sephora.com in 20 minutes. The second raked in more than $3.5 million in sales in the first day.

Which brings us back to Jaclyn Cosmetics’ highlighter launch.

“The first launch sucked, but everybody deserves a second chance,” said Hill. “That was the first time I’ve ever done anything where it was me, my team, my brand and it wasn’t a collaboration and it did not go how it was planned to go. If people are upset about what happened the first time around and they don’t want to buy this collection, I totally understand. But I’m gonna keep going and proving myself. Even if it takes a year for some of these people to come back and say, ‘I’m gonna buy this product now,’ that’s totally fine. I’m gonna work my hardest at creating incredible products and building an incredible team and at some point, the word’s gonna get out on social media. It’s gonna take time and I’m fully aware of that. We’re gonna move forward in proving that it is a solid, amazing brand.”

Jaclyn Hill on Making a Highlighter