"Everybody was talking about the fact that I lost three million subscribers."

James Charles has had quite the year.

Since the last time he stopped by WWD to talk about his Morphe palette, which has since sold out four times, he had a public feud with a fellow YouTuber that made mainstream news and cost him three million followers. But six months, one puppy, and another Morphe palette later, Charles, 20, says he is on the mend.

“It’s been definitely like a roller coaster over the past few months, and it’s been a lot of ups and downs, but I’ve been working hard behind the scenes to get everything back in order, get my right team in place, and come up with a lot of really fun projects that I know will be a huge passion for me, so it would take my mind off of things and really get my head back into the space that it needs to be in, which is creating, creating, creating creating, because that’s truly what makes me the most happy,” Charles said.

“In terms of mental health, I’m OK, but in terms of what I’m working on, I’m really excited,” he added.

On a whirlwind press tour for his second Morphe collaboration, Charles was apologetically an hour late — rain — and showed up in glitter eyeshadow and Prada stretch fabric booties, game to shoot an entire video (sneak peek) and answering rapid-fire fan questions in seven minutes provided it didn’t require him to talk about anyone else. He straightened out the letters on his Sisters necklace and got down to business, questioning the popularity of his cooking videos, as he can’t really cook, and unveiling that he plans to launch his own beauty brand, now that he feels he has a solid idea.

Charles just introduced his second collaboration with Morphe, a mini version of his Artistry palette and a 13-piece brush set, is toying with the idea of bringing his Sisters Apparel brand into retail in 2020 now that he’s secured a new manufacturing partner (he had been working with Jeffree Star’s Killer Merch, but the fight ended that partnership), and is working on some sort of secret film production. He’s being judicious in the projects he’s decided to work on, he said, and has experimented with taking time off.

“[The fight] affected both [business and mental health] for sure — everybody was talking about the fact that I lost three million subscribers,” Charles said. “This put into perspective what really mattered to me. I was definitely getting to a place where I was really obsessed with likes and performance and coming up with new video concepts, which I think every influencer falls into at some point. But this was an important moment for me, as awful as it was, to take a step back and realize what was important to me, which is friends, family and my own personal happiness.”

He canceled his tour, though said he hopes one day to plan another one.

“After everything that happened I’m taking priority on my mental health, which has never been a priority for me before, it’s scary to admit, but I think there’s always time for a change. I’ve been really making sure that I’m good before forcing myself and overworking and not getting any sleep. The Internet is always there, I can always make new videos. The fans will understand.”

By the numbers, Charles, whose subscriber count is now back up, is one of beauty’s biggest influencers. Right now, he has 16.2 million YouTube subscribers, 15.9 million Instagram followers and 4.2 million Twitter followers. He started doing makeup for his friends in upstate New York, where he’s from, before posting looks on Instagram and eventually landing the CoverGirl contract that propelled him into mainstream culture.

Lately, he’s trying to think less about likes — “I’d be lying if I said I didn’t notice, but I definitely cared less this year” — and said he experimented with taking them off on his Instagram account, and “hated it.” He also didn’t like YouTube’s removal of verification badges, he said.

“There’s a lesson to be learned here — verification symbols and likes do not determine your success, your creativity as a creator.…That being said, I do think they are important because they help fans identify who the real accounts are.” He also sees value for brands looking to evaluate which influencers to work with.

Charles is still making beauty videos, but they don’t always perform as well as his other content. One recent video about the Anastasia Beverly Hills foundation has nearly 3.5 million views, while “Adopting a Puppy!!” has 12 million. “No More Lies,” the video where he addresses the fight with YouTuber Tati Westbrook, has 47 million views.

“Everyone’s confused right now about what people truly want to see. Nobody wants to watch tutorials anymore, nobody’s clicking on reviews anymore,” Charles said. Influencers are full-fledged celebrities now, watched equally for their personalities as the subject matter they create around, Charles posited.

“We’re able to reach an audience that is so much more than just the beauty lovers — that’s the reason the reviews and the tutorials don’t get as [many] views, because those are videos specifically for the beauty lovers,” Charles said. “A lot of us feel the pressure of needing to create that extra crazy, fun kind of out-of-the-box content, too, to kind of appease the whole audience…it becomes harder and harder as we all get bigger.”

Charles is showing more of an interest in fashion — he attended his first Met Gala and New York Fashion Week earlier this year — and is working with Joey Thao, a Los Angeles-based stylist who also works with Nikita Dragun. “Fashion is a huge passion of mine, but it’s something I’m not necessarily the best at,” he said. In 2018, he described his style as “ath-leisure with a twist of gay.”

At some point, he’s planning to launch his own beauty brand.

“I didn’t want to do it [before] because I didn’t have a solid concept.…I didn’t want to put out something that was ridiculous just to slap my name on it and get a few extra dollars in my bank account,” Charles said. “I definitely won’t be doing another palette anytime soon, [but] I do finally have a solid concept for a brand that hopefully will be something new in the market.” 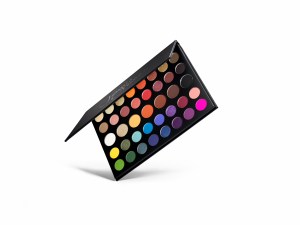 On Oct. 17, Charles launched the mini artistry palette at Ulta Beauty and Morphe — in stores and online. After listening to fan feedback, Charles decided to make the palette smaller, include a mirror and drop the price point. It retails for $26 — “$23 if you use code James for 10 percent off,” he noted.

“We gave the girls what they want,” he said. “We’re not claiming it’s a crazy new palette that everybody has to go out and buy, which I think is different from a lot of other launches because, of course, everyone wants to sell, duh, it’s a business.…I don’t know how this is going to do, to be perfectly honest…it’s the same colors, we’re not hiding that.”

The mini hasn’t yet sold out, but Charles’ prior palette was the best-selling Morphe product this year. Morphe has also done product collaborations with mega influencers Jaclyn Hill and Jeffree Star, and recently landed a $2.2 billion valuation and investment from General Atlantic. The company’s influencer collaborations were said to be part of the appeal.

The James Charles and Tati Westbrook Feud: Everything You Need to Know