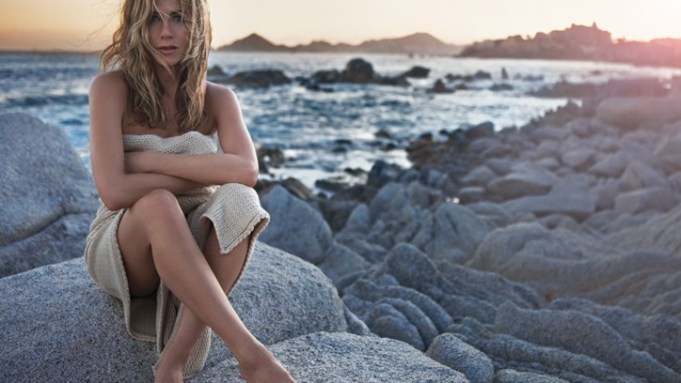 LOS ANGELES — Jennifer Aniston is taking her own brand of natural, easygoing beauty into the fragrance market with her first perfume, Lolavie, which she described as “a nonperfume perfume.”

Aniston hopes her sexy, casual persona will translate into a scent that stands out in a marketplace of stylized or glamorous brands fronted by other A-list stars.

“It’s been a year-and-a-half journey,” she told WWD. “I’d been asked to do things before, and it never felt organic. But when Leon [Falic, president of the Falic Fashion Group] approached me to be involved with the process from inception to fruition, I thought, ‘This could be a creative expression.’ And it’s turned out to be an extension of myself as opposed to slapping my name on something.”

Lolavie, produced by the Falic Fashion Group, will launch exclusively at Harrods in June, and roll out nationally in the U.K. in July through Boots and the Perfume Shop. It will then hit the U.S., but distribution and dates haven’t been determined. A 50-ml. bottle will cost 30 pounds, or $46.50 at current exchange rates, at retail in the U.K., with the 85-ml. version priced at 40 pounds, or $61.95.

Speaking on the set of the comedy “Just Go With It” costarring Adam Sandler, Aniston is working a natural look — tousled hair, tanned skin and minimal makeup — for her character, a single mom forced by her boss to masquerade as his soon-to-be ex-wife. It’s similar to her signature sweet-meets-sexy chic, which has become emblematic of the laid-back, healthy California lifestyle many brands vie to capture.

And that’s the aesthetic Aniston aims to bring to her fragrance.

“The first perfumes I ever wore were Miss Dior and Anais Anais,” she recalled. “My mother wore Calèche and my grandmother used a body splash that came in a big yellow jug that she kept by the bathtub. Those were very strong scents. Now I am not a big perfume-y fragrance fan.”

But Aniston has a love of outdoor smells, namely her favorite place, the beach, and flowers on a spring morning. She described Lolavie as “sexy and clean” and “floral, but not too flowery.”

“I want people to go, ‘What is that? You smell great!’ But most of all I wanted it to smell natural,” she said.

Aniston’s previous experience in the beauty arena amounted to an ad for L’Oréal hair spray in the Nineties. Why did she hold out so long?

“Nothing made me go, ‘Oh that would be fun’ until this,” she said. “It wasn’t just about showing up for a shoot and putting my name on a bottle. I felt like a little chemist.”

Aniston didn’t have any hesitation about entering a fragrance field crowded with actors and celebrities.

“The way I was approached, given such involvement, I never felt like, ‘Oh, gosh, I shouldn’t do this,’” she said. “And if something is good, it doesn’t matter if the marketplace is crowded. I thought it was an opportunity to go behind the scenes, and if it feels good, why not go for it? It’s like being a producer and knowing the writers and stirring up ideas as opposed to being an actor for hire.”

The Lolavie bottle was inspired by Aniston’s affinity for modern architecture, as well as waves at the beach. The origin of the name remains a mystery.

“It’s a long story and honestly it’s too personal to tell,” she said. “But it has special significance.”

What’s clear, however, is the phonetic similarity to “l’eau la vie,” and water and life are major themes in the print ad campaign, for which Mario Sorrenti shot a tanned, toned Aniston on the beach in Cabo San Lucas, Mexico.

“What you see in the photos is really how she is; she’s unrehearsed and free,” said David Lipman, who conceptualized the brand, from the packaging to the ad campaign, with Aniston. “She didn’t want it to feel like a moment of pretension at any point, and even the shoot was very one-on-one. We hope that if people like the purity and the naturalness of who she is, they will want to experience this product with her.”

The ads will break in the June issues of British fashion magazines, coinciding with a personal appearance at Harrods to mark the launch. With her next film, “Switch,” not hitting theaters until August, Aniston said she plans to focus on promoting Lolavie this summer.

“Jennifer showed clear vision for the fragrance from the outset,” Leon Falic said. “Her references evoke her love of the natural world and the fragrance celebrates her as an intelligent, natural beauty whose strength and elegance are unparalleled.”

As for expanding beyond one fragrance to color cosmetics or skin and body care, Aniston said, “Oh, anything’s possible. I would hope [Falic and she] get to do many things together.” When asked about whether she sees herself creating a Jennifer Aniston House of Beauty, she laughed. “I don’t know about that. I’ll stick with Lolavie right now and we’ll see how it slides up the flagpole.”

Asked about being a celebrity and the potential for even more exposure with the launch of a perfume, Aniston responded with the calm of a person who has made peace with living a life in the public eye.

“I don’t think you can control that at the end of the day,” she said. “You can’t stunt what you do to please or not please the public. And the media will create stories whether they are true or false. So why stop doing what makes you happy? Be true to yourself and everything else will follow.”

The same applies to her acting. “Obviously, I’m drawn to comedy, good or bad. But I love doing parts that are different and I sprinkle those throughout to get creatively unstuck,” she said, noting her independent films “The Good Girl” and “Friends With Money.” Her next indie project is the film “Buttercup” a father-daughter drama directed by Niki Caro.

“I’m really excited about that one,” Aniston said. “It’s not trying not to make people laugh and it’s not a big tent pole picture. It will be more for me — and for the people who say, ‘You should do something serious.’”

Other directors she would like to work with include Drew Barrymore, David Fincher, Steven Soderbergh and Kathryn Bigelow, who won the best director Oscar this year for “The Hurt Locker.”

Aniston will also be returning to the stage. She started her career on the boards in New York, though she said, “Off-Broadway was the closest I got,” to take part in the Urban Arts Partnership’s 24 Hour Plays on Broadway for the second time.

She made her directorial debut with the Glamour Reel Moments short “Room 10” in 2006, and now feels up to the challenge of directing a feature film.

“I have a project in development I’m going to direct,” she hinted. “After you get enough movies under your belt, you sit back and go, ‘What’s next?’ It’s getting to be the time where creatively I want to turn in a different direction.”

Aniston was one of Hollywood’s longtime holdouts for a beauty deal. Her signing marks the latest in a string of high-profile celebrities drawn by the lures — and cash — of the beauty world. (According to sources, top Hollywood celebrities can command anywhere between $3 million and $10 million for lending their names and well-known faces to fragrances and other beauty deals.)

Another longtime holdout, Julia Roberts, was named in December as a global ambassador for Lancôme. Her first ad campaign, for Définicils Precious Cells Mascara, was shot by Mario Testino and will begin running in the U.S. this summer (it is currently out in Europe and Asia).

Beyoncé Knowles launched her first scent, Beyoncé Heat, in February, and according to sources, it did $77,000 in one afternoon at Macy’s Herald Square, where the star had shown up for a personal appearance. The scent is said to have done at least $3 million in retail sales since its launch.

This summer, Mary J. Blige will launch her first fragrance, My Life, with Carol’s Daughter, and, on Thursday, Bruce Willis revealed he had signed a fragrance deal with German cosmetics maker LR Health & Beauty Systems — although for now it looks like it will be distributed only in Europe and Asia.