The designer remained true to her beauty aesthetic, albeit with an evolution in the hair department. 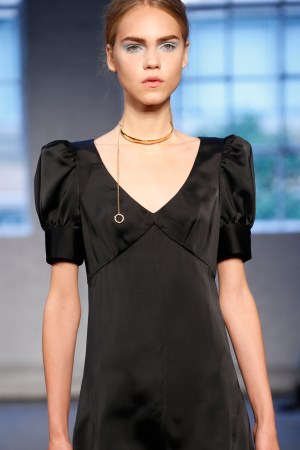 Beauty at Jill Stuart remained true to the designer’s sophisticated downtown-girl aesthetic — albeit with one unexpected evolution in the hair department.

Lead makeup artist Aaron de Mey for MAC kept the face free of foundation so as to appear fresh and “innocent.” De May alternated between MAC Pro Longwear Paint Pot in Clearwater and a blend of Chromaline in Process Magenta and Clear White wrapped all over and around the eyelid. The intensely saturated pastel shadow looks were a “way to define the eye without using dark color,” which made for a “Seventies-inspired style that still looks tough.” Lashes were given two coats of mascara on top and one on bottom for a dramatic finish. De May kept lips natural, using only a lip conditioner.

James Pecis for Oribe led hair, which was a loose, low ponytail tied high at the nape of the neck. The pony was a deviation from Stuart’s usual routine. “It shocked us all,” said Pecis. In seasons past, the designer has opted for flowing waves, and Pecis noted that the style for this show, while different, was simply a continuation of Stuart’s signature look. “It’s still full and beautiful.” Pecis noted that prep work was the same as any other Jill Stuart show, starting with wet hair prepped by Oribe Maximista Thickening Spray. After a rough-blow dry, a small amount of Supershine Moisturizing Cream was twisted through ends, and hair was pulled into the ponytail, with a few loose pieces taken out to frame the face.

Nails, led by Cinnamon Bowser for Zoya, were a translucent French manicure meant to look sheer and shiny. Zoya Pink Perfector was used as the base, with White Tip Perfector at the tips.