Jin Soon Choi will open her fourth nail spa in TriBeCa, a 2,500-square-foot flagship that doubles as the company's headquarters, and is growing her nail lacquer line into a global business. 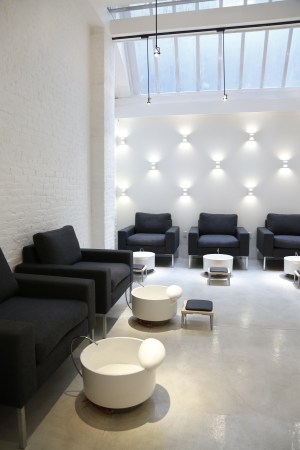 Jin Soon Choi went from riding a secondhand 10-speed bike to clients’ homes around New York City with manicure tools in tow to becoming one of the most sought-after nail artists in the industry.

Next week, Choi will open her fourth nail spa in TriBeCa — a 2,500-square-foot flagship that doubles as the company’s headquarters — and is nurturing her nail lacquer line into a global business.

Choi and husband John Coughlan — also the architect of the space — met right before Choi opened her first salon in 1999: the 300-square-foot storefront on East 4th Street in the East Village. In the 17 years since, the two have built a nail empire, turning the original two-station manicure and pedicure salon into a multimillion dollar company.

During a walk-through of the new space, located at 37 Walker Street between Church Street and Broadway, the couple said this is the largest of Choi’s four New York City-based salons. In addition to the East Village location, there are salons on Jones Street in the West Village and East 73rd Street on the Upper East Side. Manicures start at $20 and go up to $45 and pedicures range from $35 to $65.

“I like small salons, but a lot of people have been requesting [to have] events [here],” Choi said. “[I knew] we should have a bigger spa, especially in TriBeCa. The location is so good and it’s a really booming area.”

The decor is unlike any of Choi’s existing locations. In addition to tripling the space dedicated to manicures — this location has 12 stations for nails — there are high ceilings, minimal design accents and clean lines that definitely skew more “gallery” space than nail salon.

Which was exactly Coughlan’s intention.

He was meticulous about the decor. He wanted the spa to have a gallery, museum hybrid feel, rife with muted tones, blonde maple wood accents and tinted white concrete floors. For instance, a continuous “ribbon wall” was fashioned from thin pieces of edge banding (the wood that’s used to put edging on a piece of furniture) with a photo booth lodged within for clients to take pictures of their manicures to share with their friends via social media. In keeping with the gallery idea, the wall directly facing this is white-painted brick with rows of nail polish displayed as “the art.”

The back of the spa has eight stations for pedicures that are set against an illuminated, quilt pattern of lights. Lush, deep blue-gray chairs that were customized for the salon sit beside oversized basins where clients can choose from seven different services that infuse ingredients from mint leaves to flower petals.

But beyond her salons, Choi has also become a brand in her own right. She still juggles a robust editorial schedule — where she is an editorial manicurist for fashion shows, high-profile advertising campaigns and magazine cover shoots.

Choi’s line of polish came out in the fall of 2012, with SpaceNK the first retailer to carry the collection. Today, the range of over 50 colors is sold in 100 doors worldwide, including Barneys New York, Bloomingdale’s and Net-a-porter. Each bottle retails for $18, and Choi has collaborated on special editions with Goop, Tibi and Barneys New York. The lacquer is sold in Hong Kong, Singapore and Norway, and the first order was just sent to St. Petersburg, Russia.

“When we launched, we said, ‘How can we make our polish last longer without using any gel ingredients?'” Choi said of the line. Beyond the aesthetics of creating a “high fashion-based nail line,” that was high gloss, she sought to adopt a gel technology without the harsh gel chemicals. The double patented formula is also five-free and vegan-friendly.

Coughlan chimed in: “With the nail spas, we like staying local. Jin likes to train and interview new hires. We don’t see expanding the spas in the near future. The goal is to expand Jinsoon lacquer; expanding the color range, but also going into nail care.”