An editorial superstar with just a handful of true peers, hairstylist Serge Normant proved elusive prey for Frieda, who has long prided himself on luring megatalents such as Sally... 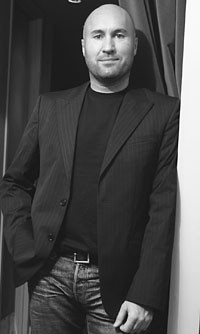 An editorial superstar with just a handful of true peers, hairstylist Serge Normant proved elusive prey for Frieda, who has long prided himself on luring megatalents such as Sally Hershberger, Sharon Dorram and Christophe Robin to headline his salons. Over the years, Frieda’s equally star-studded editorial team also has included the likes of Orlando Pita, Kerry Warn, Rick Haylor and Danilo.

Imagine his frustration, then, at not being able to forge a working alliance with the guy Julia Roberts, Sarah Jessica Parker and Julianne Moore have on speed dial.

But, happily for Frieda, his patience has paid off. Not only has Normant taken up residence at the newly renamed Serge Normant at John Frieda Salon on upper Madison Avenue, he also has been named the first-ever creative director for John Frieda Professional Hair Care.

In essence, Normant’s dual appointment represents the first true bridge between Frieda’s salon business, which he wholly owns, and the product company, which he sold to Kao Corp. in 2002 for $450 million.

Calling from London, where he permanently relocated after the Kao acquisition, Frieda sounds elated about the Normant coup. “Serge and I have been talking for years and years,” he said. “He always told me, ‘Look, I just don’t know whether I’m ready to do this. But if and when I do, you’re my first choice. And when I decide to do it, I’ll be giving it 100 percent.’

“To have a great salon, you need a great creative leader,” Frieda added. “That’s the one indispensable part.”

Over a fast croissant at Balthazar, Normant echoed Frieda’s sentiments. “The timing was just never right before,” he said. “But I’ve always had tremendous respect for John as a person, an artist and businessman. He’s done very well, and in a way that I think is very chic. I like the way he lives his life.”

Although he began his career in hair salons, Normant, a Paris native who just turned 39, has spent the last 15 years in the trenches of the runways, magazine editorials and ad campaigns. He also has published two splashy coffee table books of his work: “Femme Fatale” (Viking Studio, 2001) and “Metamorphosis” (Abrams, 2004).

Apart from runway, which he has all but walked away from save for top-tier shows such as Chanel, Normant fully intends to continue his other endeavors. He expects — and will get — enormous flexibility with his schedule. Indeed, under the terms of his two-year contract, he is obligated to be in the salon just four days a month. His duties on the product side are even less restrictive.

“We look at Serge’s involvement as a very organic process,” said Brigitte King, assistant vice president of marketing for John Frieda Professional Haircare. “It’s actually not incredibly formalized, which is very much in the spirit of the company. This isn’t about a structured role, as in ‘Please go into a room and be creative now.’”

That said, King and her team expect to set Normant loose on the Frieda image. “He’ll help impact our future —what we look like and how we define our entire visual vocabulary,” she said. “I welcome his collaboration on new advertising, both television and print. We’ll start putting all that into play for 2005.”

A Serge Normant product line also may figure into the mix at some point.

“I’m in this for the long haul,” said Normant. “My contract is renewable almost automatically, which is how it should be because this is an association that needs to be developed over time. Just in regard to the salon, it takes at least a year to figure how you want the shop to look, the type of people you want working there, how you want to be portrayed in the press.”

In the past month, Normant has logged 10 days at the two-story salon, wielding his scissors — at $500 a pop —right alongside the rest of the staff. “We intended the second floor to be my private space but I get really lonely up there,” he said, chuckling. “For some VIP clients, I do need privacy. But I’ve figured how to set up a little secluded island in the middle of the floor. And that’s good, because I really do like to work with the other stylists. It’s very inspiring to me.”