The outspoken founder of Juice Press talks about the blurring lines between beauty and wellness. 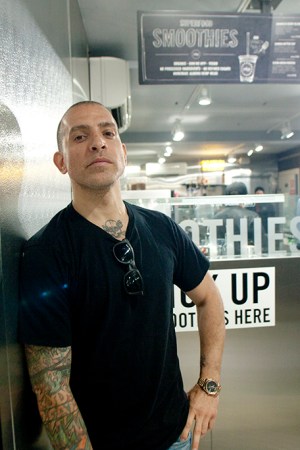 Marcus Antebi bursts through the doors of the 55th Street Juice Press, a tattooed ball of energy clad in a black T-shirt and cuffed jeans. He beelines for the refrigerator and chugs half of an OMG! green juice before dumping a slew of probiotics in his hand and swallowing them in one gulp.

That, in a nutshell, is the 46-year-old founder of one of New York’s largest juice chains. He’s active (a former skydiver and Thai boxer), 29 years sober and a devout advocate for a clean lifestyle that includes plenty of juice and raw food.

As he’s grown his empire to 25 locations in New York and Connecticut over the past five years, he’s witnessed a dramatic shift in the consumer. Whereas juicing used to be about quick-fix weight loss, his customers are now interested in overall health.

“For a lot of people, coming to Juice Press means they are doing something good for themselves,” says Antebi. “The consumer is educated enough to know that there is a way they can take care of the whole system all at one time.”

Very few of Antebi’s customers are strict vegans, but rather, “the lifestyle is very typical of people who have reached a higher consciousness with their health interests,” he says. “Our customer ranges from urban skateboarder dudes to women who have castles on 65th and Madison.”

What’s driving Juice Press’ rapid growth, says Antebi, is a combination of consumers’ increasing interest in wellness, easy access to information online and the realization that incorporating juices into their diet provides a slew of benefits. “He already has an idea that drinking juice or having a smoothie is going to make him feel better and have energy,” says Antebi.

But what sets Juice Press apart from the other chains? “Transparency,” Antebi is quick to say. “My kitchen is made out of glass. We follow all of our supplements and sources directly to where they’re grown, manufactured and handled.” That, and his tongue-in-cheek advertising. When Chipotle recently released an ad committing to GMO-free ingredients, Antebi responded with his own: “A big F#*K off to GMOs. We have always been organic and therefore our produce has never had genetically modified anything.”

As more consumers reach for green juices, there’s a similar shift taking place in beauty. For the 52 weeks ending November 2014, natural and organic beauty products grew 24 percent, according to Nielsen. As the category explodes, the consumer mind-set is shifting to equate beauty with wellness. “Isn’t it sad that it took [until] the year 2015 to actually say that?” says Antebi. “Genes dictate disease and aging as little as 20 percent— the rest is all lifestyle.”

As proof, he points to the skin around his eyes, relatively line-free. “I don’t actually use any skin-care products,” he says. “I’m so happy that at 46 I’m still looking for those wrinkles—I don’t have them.”

While Antebi may be a testament to lifestyle choices, the majority of consumers are still reaching for creams to combat aging. What’s missing from the natural and organic product offering, he says, is in the packaging. “I don’t want to see the idyllic woman with good hair,” he says, pointing to an all-natural hair-dye kit tucked on a shelf at Whole Foods Columbus Circle. “I want you to tell me right now why this isn’t going to make me sick. These guys are not doing a really powerful job of saying, ‘No parabens! All natural! As effective as you can be without putting f—king poison in it!’”

That, he says, will sell.

“People are concentrating now—frantically reaching for products—that are going to do something that their body can’t do,” he says. “The body is unbelievable at healing and cleaning and filtering.” He predicts that in 12 years, the idea of preventative beauty through lifestyle will come to fruition. In fact, he’s already selected a star ingredient: green pepper juice. “Even though it doesn’t taste good, it’s rich in vitamin C,” he says. “One of the atomic elements in it is silicon, [which] makes up your skin, hair and nails.”

If it all sounds pie in the sky, Juice Press’ continued growth would suggest otherwise. “My consumers coming through the door,” he says, “they get it.”