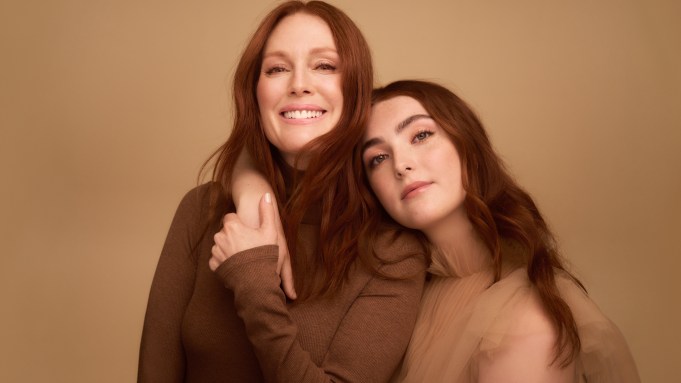 The cruelty-free luxury beauty brand has inked a one-year deal with the Oscar-winning actress, tapping her for its latest “We Glow” campaign, which introduces the brand’s new Ambient Soft Glow Foundation.

“There’s something very natural and effortless about her persona and who she is,” said Carisa Janes, founder and chief executive officer of Hourglass, of why she sought to partner with Moore.

Moore appears alongside her 20-year-old daughter, Liv Freundlich, in the campaign, which seeks to highlight the power of human connection and inner beauty by spotlighting five duos whose bond embodies exactly that.

“Our culture is often focused on outer beauty and trying to combat aging,” Moore said in a statement. “I appreciate the refreshing approach of this campaign in showing that beauty also comes from within, and from the relationships we share.”

Infused with White Tea Extract and Vitamin E, the Ambient Soft Glow Foundation retails for $58 and has 16-hour wear and imperfection-blurring claims. The foundation is available in 32 shades and builds upon the brand’s Ambient Lighting Collection, an array of powder products including blushes and bronzers that aim to provide a lightweight, radiant finish.

“I’m excited to kick off my partnership with Hourglass with such a high-performing product that works for everyone,” said Moore in a statement. The actress is Hourglass’ second ambassador to date, following the induction of model-turned-entrepreneur, Rosie Huntington-Whiteley, in 2020 — a landmark year for the brand, which also went fully vegan within months of the partnership debut.

Hourglass hero products include the Voyeur Waterproof Gel Eyeliner, Unlocked Instant Extensions Mascara and the Vanish Airbrush Concealer — one of the brands earlier forays into complexion products, the success of which has been a guiding light as the brand aims to delve deeper into the category.