Elemis’ double-decker mobile spa, atoothpaste line worth smiling about and a trendreport from Australian Fashion Week. 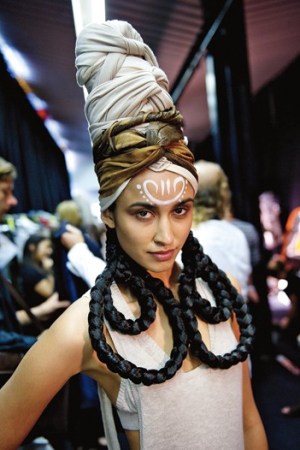 Meet Pact, a Nonprofit That Aims to Unify the Beauty Industry and Tackle Waste

Designers dabbled with the dark, mystical side of beauty, articulated in intense lip shades, tribal markings and textured appliqués. A head-turning pout in a semimatte plum burgundy was the focal point on Zimmerman’s face, where makeup artist Linda Jefferyes blended MAC’s Lipmix Burgundy and Plum. Black-outlined magenta shades gave the vamps at Romance Was Born an intimidating edge, while ornamented eyebrows had a punk vibe at Saint Augustine, and faces bore mysterious tribal markings at Kirrily Johnston.

Appearing as though they just stepped onto the runway from their retro beauty parlor appointment, looks inspired by Mad Men and Tom Ford’s A Simple Man were popular in the forms of coiffed updos, winged black eyeliner and pink lipstick. Jayson Brunsdon’s impeccably groomed belles lounged poolside with a girlish flush from MAC’s Politely Pink lipstick, while voluminous updos made for sharp profiles at Nicola Finetti, where stylist Lance Blanchette said, “The new updo is tight, crisp with a sense of discipline.”

Resembling the intense shades of the Australian outback at dusk, a color scheme of peach, pink and copper eyes and cheeks were popular at multiple shows. Hues ranged from shimmery peachy pink to baked peach bronze to coppery bronzes, often offset by pops of tangy orange, pink and turquoise. “Warm peach and orange tones are not as chalky as pastels and are more flattering for a hazy, soft eye,” said makeup artist Noni Smith for MAC at Camilla and Marc, who mixed MAC pigment powders Neon Orange, Coral and Acid Orange to get the right hue for a soft but zingy effect.

Next: Elemis rolls out a double-decker spa >>

Elemis is giving the term “destination spa” a new meaning. In May, the British skin care brand unveiled a double-decker bus fully kitted out with a SpaPod treatment room and consultation area. Dubbed the Elemis SpaBus, the mobile salon was designed to fete the British skin care brand’s 20th anniversary and is pitching up at music festivals and sporting events around the U.K. through December. “We’re taking Elemis to people in environments where they wouldn’t usually [expect to see the brand],” says Sean Harrington, managing director. The bus offers 15-minute face-and-body treatments, including the Skin Booster facial and the Sole Rescue foot treatment, with prices starting at $15.

Dental practice Dawood & Tanner plans to give its patients—and people who don’t frequent its London clinic—something to smile about, with a new dental care line that launched in Boots in May. Dubbed “tooth cleansers” rather than toothpastes, the products are meant to elevate oral hygiene from a mundane task to a beauty regimen. “Teeth are a really important aspect of beauty,” says dentist Susan Tanner, adding she hopes to promote better brushing techniques in Britain. As well as offering traditional Garden Mint and English Peppermint varieties, the tooth cleansers, which costs about $6 for a 100-ml. bottle, also come in Brazilian Lime and Sicilian Lemon flavors.

Next: Finding hair Zen in Berlin >>

From Showbiz to Sheers

As a teen, Max Höhn wanted to become an actor, but his mother said he first had to train for a more stable career—hairstylist. “I didn’t want to do it, but I thought, At least I’ll get away from home,” he remembers. The moment he finished, he went off to drama school. But the stress of an actor’s life brought him to Buddhism and it was while chanting for serenity that Höhn kept seeing the same image—a tiny salon with just two chairs, on a quiet Berlin street. After three years of having the vision, he decided to take the cosmic hint, and in 2005 he opened his mini dream shop, which was quickly booked up months in advance. Höhn’s hair Zen has been such a hit he moved to bigger digs in May, where his client list reads like a copy of German Grazia magazine: actors, a TV chef, fashion people. Though he’s styled celeb weddings and red-carpet looks, Höhn is quick to point out he’s not a star hairdresser. “I just love people. I didn’t know this before!” he says, clearly enjoying face-to-face feedback to applause in the dark.  Schröederstrasse 10, 10115 Berlin +49-30-2809-9277