‘Queer Eye’s’ Karamo Brown Gets Into the Business of Balding

Brown is a cofounder of Mantl, a new personal-care brand for bald and balding men.

Brown, along with two alumni of Honest Company, is the cofounder of a new Los Angeles-based personal-care brand called Mantl. The company, which has been in the works for the past two years, will offer grooming products for bald and balding men. It is Brown’s first venture in the beauty industry and was appealing to the Netflix star because of his own struggles with baldness — a topic he has previously discussed on “Queer Eye.”

“Seasons one and two, we taped them and I had a hairline that was fake,” said Brown. “Then at the premiere, I was bald. It was because I had always been bald, but I finally just embraced it. So many men, whether they are thinning or balding, are having the same issues [where] it is affecting their self-esteem and the way they deal with their families, friends and careers. The goal [of Mantl] is to help men feel confident in a healthy and positive way.” 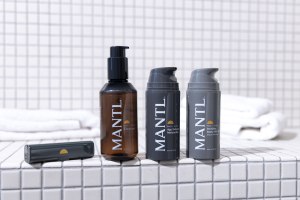 Mantl’s products are meant to be used for both the scalp and the face.  Courtesy Image

Mantl launches this week on its own web site with four products: Face + Scalp Cleanser, $16.99, Face + Scalp Age Defense Moisturizer, $24.99, Invisible Daily SPF 30, $26.99, and No-Shine Sheets, $9.99. The company’s name, said Peter Ricci, Mantl’s chief executive officer, stems from the saying “carry the mantle,” which in this context means men having confidence in their baldness. The name Mantl is also a reference to the skin’s acid mantle which, said Irene Kong, Mantl’s chief product officer, “protects us from environmental stresses, bacteria, sun rays, everything.”

“Losing your hair, you are losing the barrier from sun protection — and in general, protection of the scalp,” said Kong. She and Ricci are both alumni of Honest Co., where they first met. Mantl is their first joint beauty venture.

All of the formulas, said Kong, contain an herb extract aimed at balancing the biomes of both the face and scalp. That means that all of Mantl’s products are approved for both scalp and face use, including Invisible Daily SPF 30, a gel-like chemical sunscreen that applies clear and matte, according to Kong.

“You don’t have to worry about smelling like the beach or having white streaks or getting white sunscreen lotion stuck in your hair,” she said. The product is meant to work with all skin tones, avoiding the streakiness or overcast that mineral sunscreens often leave on darker complexions.

So far, Mantl has raised nearly $1 million from angel investors, including Brian Lee, cofounder and chief executive officer of Honest Co., the Steve Case seed fund Rise of the Rest and Airwing Ventures, an L.A.-based start-up. The company will seek to raise a seed round post-launch, said Ricci. 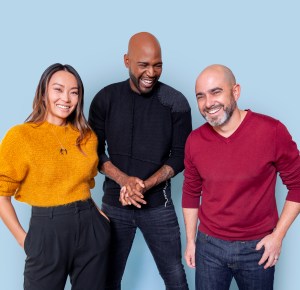 Mantl will launch new products quarterly, so long as they are “relevant to the balding journey,” said Kong. The company will remain direct-to-consumer to start. Ricci noted interest in future retail partnerships, though you’re likely to see the products on Netflix before you see them in stores.

“The beauty of our show is we’re not obligated like the first iteration of ‘Queer Eye’ was, where they had products that they had to talk about. Netflix doesn’t require that because there are no commercials,” said Brown. “Anything we recommend on the show, it’s because it’s what we want and believe in. I want the people on our show to be part of the Mantl community. The minute we get to the next season, I’m bringing these.”

The products are, Brown added, Jonathan Van Ness-approved. (Van Ness is “Queer Eye’s” grooming expert; he is also a brand ambassador for Biossance.)

“[Van Ness] has always complimented me on my skin, my grooming, so it’s nice to have him support,” said Brown. “This was a natural fit for me because everything starts with your self-esteem. If there’s anything that’s going to help build your self-esteem that I know I can be a part of to make people feel better about living better lives, then I’m gonna do it.”