The beauty brand started by the actress went back to direct-to-consumer last year and plans to reenter wholesale in the fall.

Kate Walsh's Boyfriend Perfume hit the reset button last year and is now building buzz with a pop-up at The Grove, ahead of announcing a new retail partner in the fall.

LOS ANGELES — Actress Kate Walsh is dipping a toe back into retail with her brand Boyfriend Perfume as the beauty company readies for a fall launch in stores.

Walsh started the business on her own in 2009, bringing her product to the market the following year and then selling out in 20 minutes on HSN. In 2011 the company inked a deal with Sephora to be in all of its North American stores. The growth was fast and Walsh ultimately decided to take a three-year hiatus from the business in 2015. Last year Boyfriend relaunched as a direct-to-consumer brand.

Now, the company has a pop-up at The Grove, marking the first time it’s dabbled with a temporary shop as it prepares to return to wholesale later this year with an as-yet-unnamed retail partner.

“We had done in-person appearances back in the day when I first started the brand,” Walsh said. “It [the pop-up] is just a great way to physically interact since the relaunch of the brand as far as being outside of digital and having people come in and try the fragrance.…It’s such a sensory experience, so to actually have that interaction has been super positive for the brand.”

The pop-up is part of The Grove’s Pop Shops kiosk program launched late last year in a bid to create more room and options for brands to test into the popular Los Angeles shopping center. Walsh said the reasons for testing the brand in real life at The Grove were that it is an iconic location that generates strong food traffic and offers a full experience.

“For us, this has been more of a marketing play,” said Melody Hernandez, Digital Media Management vice president and vice president at Boyfriend Perfume, adding that more pop-ups could be something to try in the future. “I think as we expand down the line more into retail, we’ll be looking to do more in-store experiences with potential retail partners with Kate.” 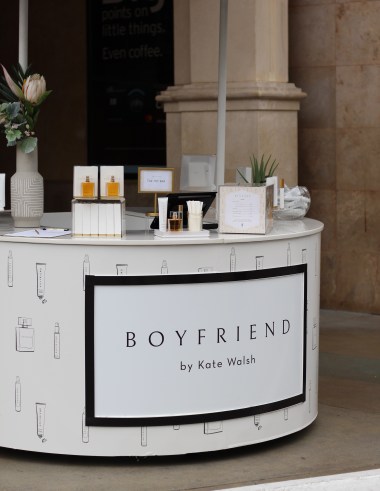 Henandez went on to say the company has studied examples in the market of traditional retailers working with digitally native brands, such as what Nordstrom has been doing with its pop-in program and at Hudson Yards’ unveil earlier this year of its Floor of Discovery.

“For us, it has to make sense,” Hernandez said of the company’s retail strategy. “I think it has to be someone who understands the brand with a retail partner whose customer is already very similar to ours and who’s already thinking about innovation when it comes to retail.”

Relaunching direct-to-consumer has allowed Boyfriend to grow based on what its consumer wants, but retail is still important, Walsh pointed out.

“It was a great advantage for us to really go at our own pace and start from a complete demand-based model, meaning listening to our customers, what they wanted, have a personal experience with them about what they like and what they don’t like so they can truly inform the brand,” Walsh said. “It’s been a wonderful way to relaunch our brand doing direct-to-consumer, but it’s really exciting getting it out to places that have prestige stores and that are known for fragrance. There’s still a demographic, younger and older, who want to walk in and try that perfume and touch it and hold it and shop that way.”

The company’s assortment includes the perfume, with a 50-ml. bottle retailing for $65, sets starting at $46 and a hand and body cream for $19. 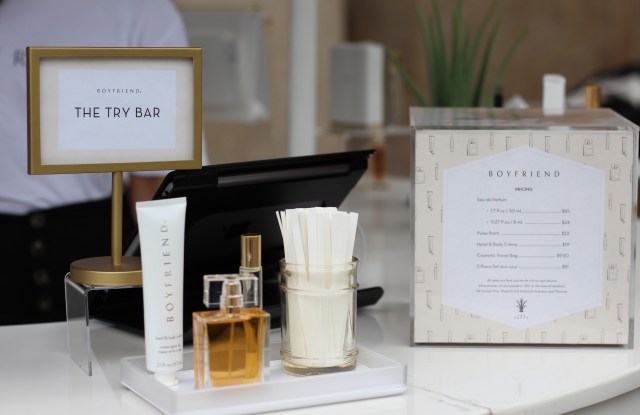 The goal in the longer term is to build out a full lifestyle brand. Additional beauty categories are in development. A room spray is expected to be rolled out in the fall.

A private Facebook group for customers is one way Boyfriend executives are listening to what its followers want, with plenty of interest in hair care being voiced.

Elsewhere in the business, a permanent store could be in the cards.

“There’s always a pressure for newness in any business, particularly in fragrance,” Walsh said. “I think for me one of the biggest lessons was to go slow because when I started, it was self-funded. You can easily get caught in the momentum or the idea of the cart can sort of run the horse, if you will. For me, it was just taking my time and going at a pace that makes sense for the business.”

Boyfriend’s pairing with Digital Media Management on the relaunch gives it an infrastructure that prepares it for growth, but Walsh tempered that with “slow and steady wins the race.” Make no mistake, she had and still has big aspirations for the business.

“When I started the brand, I really wanted it to be a lifestyle brand, expanding into all different areas so [a permanent store is] the big dream,” Walsh said. “We’re just going about it in a pretty smart way, in a conservative way. But, yes, my dream would be to have little Boyfriend shops all over.”