The business has doubled since it was acquired by the Estée Lauder Cos. Inc. in 2016.

Rolling in Love, a new fragrance from Kilian Paris.

Kilian Paris, the fragrance brand founded by cognac heir Kilian Hennessy, has garnered a loyal cult following since it launched in 2007. The brand is known for its mischievous scents — Forbidden Games, Love, Don’t Be Shy and the best-selling Good Girl Gone Bad — and recently expanded its repertoire with the launches of Rolling in Love, exclusive to Saks, and After Sunset, part of the My Kind of Love collection, at Sephora.

Kilian Paris was acquired by Estée Lauder Cos. Inc. in 2016. At that time, WWD reported the brand had about $25 million in net sales.

In an interview with WWD, Estée Lauder group president John Demsey said the business has doubled since the Lauder acquisition, declining to comment on specific sales estimates.

“The business has grown twofold based on expanding its global reach,” said Demsey. “It actually opened up 12 new markets. We’ll be launching China in the spring, we have expanded our presence in travel retail and online and expanded our distribution with Sephora, and had tremendous success with our first foray into makeup with lipstick.”

Le Rouge Parfum, Kilian’s six-shade debut lipstick collection, launched in January at Saks. At a celebratory party held at his house one month later, Hennessy told WWD that the response to the collection had been “surprisingly amazing” — so much so, a second collection will bow in February 2020. 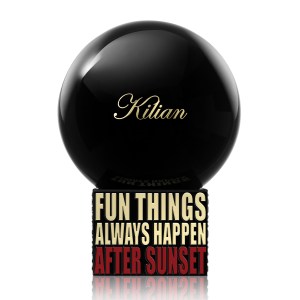 After Sunset, a new fragrance from Kilian Paris.  Les Ateliers

Kilian’s My Kind of Love collection, which launched at Sephora in 2018, accounts for three-quarters of the brand’s overall growth in 2018, according to Demsey. “My Kind of Love was a major launch last fiscal year and represents about 20 percent of our business,” he said. “Le Rouge Parfum, in certain distribution where it’s at, can represent as high as 10 percent of our total mix.”

Sephora.com is Kilian’s number-one retailer, according to Hennessy, though Saks has also contributed to the brand’s growth. Saks began carrying Kilian when it was just one year old. Kilian is now available at all Saks doors.

“We’ve had year-over-year growth [with Kilian Paris] since the conception,” said Kate Oldham, senior vice president and general merchandise manager of Saks. “We were starting to carry niche fragrances back in 2002 and we’ve built this portfolio, so our consumer comes to us for that. Kilian Paris does fit perfectly into what the customer expects from us, which is something unexpected and fabulous.”

After Sunset, said Hennessy, was inspired by “a sunset in Ibiza.”

“When the night approaches, all the exciting things happen,” he said. “Because it’s called After Sunset, I had to think about the best sunset moments in my memory.”

In doing so, he landed on Café del Mar, a popular bar in Ibiza known for its lounge music. After Sunset has notes of lychee and cut grass accord.

“There is no lychee available in the perfume world, so you re-create lychee accord by combining black currant notes with rose notes,” he said. “I think you smell more the cut grass on the skin.”

Rolling in Love launches as a solo scent — something that is uncharacteristic of Hennessy’s brand, though he does foreseeing doing more solo scents in the future.

“Usually my scents always come in a collection of scents, which is a bigger story,” he said. “I probably won’t be doing collections any more because I realized that when I launched three scents, there’s always one scent that cannibalizes the entire collection. Always the case.”

Rolling in Love, which is inspired in part by the psychoactive drug MDMA, is half comprised of white musk and includes notes of almond milk, iris and tuberose.

“The emotion I was trying to convey and express was the feeling of being so in love with someone that you have this person under your skin,” said Hennessy. “Usually when you have this intense feeling for someone, you go through a bit of a rollercoaster with the person. It’s the feeling of loving someone so much, that sometimes even your heart hurts that you love so much. That’s why the color [of the fragrance] is red — the color of passion, obviously, but also for me, the color of a bleeding heart, when you bleed for someone.”

Sephora’s Artemis Patrick on the State of Beauty: ‘Makeup Is Not Dead’