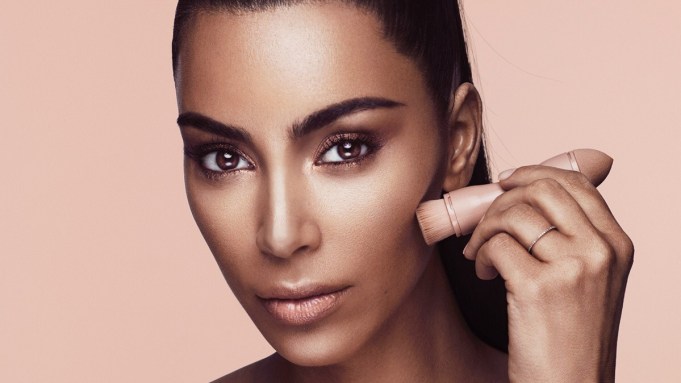 Get ready for Kim Kardashian to break the Internet — this time as a businesswoman.

The reality star is about to make her first standalone venture in the beauty space with the launch of her new company KKW Beauty, and it will initially focus on what she is known for (or at least one of the things she is known for): Contouring.

And the numbers are bound to make even beauty’s mega-giants green with envy: Industry sources project that Kardashian will blow through the reported 300,000 units that were produced of her $48 Creme Contour & Highlight Kit in less than five minutes, amassing $14.4 million in sales. Extrapolate that out, and that means if enough supply were available and the pace were maintained, Kardashian’s single product would generate sales of more than $170 million a day.

These estimates are proof that even with no prior experience at the helm of a beauty brand, Kardashian — as well as her 19-year-old half-sister Kylie Jenner — wield a selling power that rivals beauty behemoths from L’Oréal and the Estée Lauder Cos. Inc. to Procter & Gamble Co., Coty Inc. and Unilever.

An expert at building buzz online, Kardashian started teasing the KKW Beauty line to her 101 million Instagram followers last week, leading up to the launch of kkwbeauty.com on June 21. A preview of packaging, campaign images and three videos with a flashing release date of the collection have garnered millions of views and likes — an early indication of the frenzy that could ensue when the site goes live in two days.

In Kardashian’s first interview since revealing her fragrance and future beauty plans last week at Forbes Women’s Summit, the 36-year-old told WWD that she’s ready to meet that demand.

She’s using the success of the KKW by Kylie Cosmetics crème lipstick set that she and Jenner collaborated on in April as a litmus test. According to an industry source, 300,000 of the $45 kits sold out in minutes, the equivalent of $13.5 million in sales. This sell-through gave Kardashian – as well as her partner and manufacturer, Oxnard, Calif.-based Seed Beauty (also the parent company of ColourPop) – the confidence to go big with the first drop of her new kit.

“We have a good model, and even from our lip kit, we have a really good general idea of what our customer is going to be like. We are definitely prepared for the demand.…I know they [Seed Beauty] do make a mass volume. It’s not like we’re making a small quantity and it’s selling out,” Kardashian said.

With KKW Beauty, Kardashian follows in the footsteps of her half-sister Jenner, who in November 2015 launched Kylie Lip Kits online, which contain a liquid lipstick and lip liner. (In 2016, she formed fully realized beauty company Kylie Cosmetics). The two are sticking to a similar formula — a direct-to-consumer model hinged on releasing a single beauty item or trend that has become a signature to each. In the case of Jenner, it’s lips; for Kardashian, it’s contouring.

Then there’s that little thing called social media, an integral part of the Kardashian-Jenner brand-building. In addition to letting them broadcast goings-ons or what they’re wearing that day, it’s a platform to reveal new projects and product launches, as well as a vehicle for the population at large to engage and interact with America’s most famous family.

In the year leading up to the birth of Kylie Cosmetics, so much press and social media chatter was focused on Jenner’s now-famous pout and debate over whether or not it was surgically enhanced (she later admitted it was) that the day the Lip Kits came out, the site crashed within moments.

Hopefully, the same won’t happen for Kardashian, as she’s learned a bit about launching a brand on social media from watching Jenner’s own business thrive. She insisted she’s more prepared for the demand than Jenner was almost two years ago.

“They [Seed Beauty] do go above and beyond, and they do make a lot. That was such a good testament to what we can do — whether it’s Kylie and I together and we do collaborations or…it’s just my own thing. I think they have probably looked at the numbers and ordered similar amounts of my own product,” she said.

Credited for ushering in the contour phenomenon that hit social media several years ago — along with a handful of early vloggers with millions of YouTube subscribers — Kardashian maintained she started contouring a decade ago with longtime makeup artist Mario Dedivanovic.

“[Contouring] transformed my face when I saw my nose totally change into a smaller nose — and I was hooked from then,” she said, adding that she opted to start with this particular set of products first “because I know that no matter what look I’ve been doing — whether it’s a heavier makeup look or light makeup or smoky or color — contour has always been constant. I feel like I have been known for contouring.”

The Creme Contour & Highlight Kit, which contains two dual-ended crème formula sticks and a dual-ended tool for blending that’s half sponge and half kabuki brush, is packaged in a “Millennial pink” KKW Beauty pouch. The three-piece set will be available in four shades. The functions of each stick were very deliberate, Kardashian said, specifying that the contour stick contains two complimentary shades and the highlight stick has a matte and a shimmer side.

She expounded on how she came to make this decision — and why she picked a crème formula over a matte. Apparently, it’s all part of her effort to move toward a “lighter” makeup look, as crème formulas give a more natural finish. When she does need to do a “heavier” look, she’ll combine crème and matte, and if she wants just matte then she’ll use powder only. In the wake of evolving her style the past year, Kardashian contended that it’s “not OK if you’re going to get this fashion makeover and keep the same hair and makeup.” Plus, her stylists and glam team were repeatedly telling her that the heavy makeup look she’d been sporting for years had to go.

She promised that her kits make the process easy, even for those who wish to contour, but have little makeup experience. She said the sticks are “literally almost like a crayon” that you draw on your face. Kardashian said rounded tips aid in application, which she’ll show in detail in a series of tutorials hitting her social media channels. Also, the formula lends itself to multiple-use cases and can be worn on cheeks, lips or even to prime eyelids before applying shadow.

The initial contour kit is the line’s hero product and permanent part of the brand, but she hopes to release new items monthly. Kardashian said while she might “not have as many drops [as Jenner] and I don’t have all the color kits that she does,” her second product — a concealer kit — is slated to come out in about two months.

At first, KKW Beauty will live solely as an e-commerce brand, but Kardashian is open to a number of off-line possibilities. Personal appearances have been a key part of her job, and she wants to make sure she “evolves with the times” and see what works when it comes to the physical space, whether it’s a partnership with a retailer or a pop-up.

As a precursor to the launch of her own label, she teamed with Jenner on the limited-edition KKW by Kylie Cosmetics set in the spring, which contained nude lipsticks with names like Kimberly, a true nude; Kim, a peachy nude; Kiki, a pinky nude, and Kimmie, a darker nude. Unbeknownst to the hundreds of thousands of consumers who flocked to buy the four liquid lipsticks, all inner and outer packaging had some form of KKW Beauty branding — even though the public launch was still two months out. The same sleek, pastel pink packaging is omnipresent throughout Kardashian’s own brand.

“A lot of my stuff is going to be for skin.…[I’m] trying to mirror skin care with makeup. It’s going to be a different vibe; it’s not going to be a full color cosmetics [range] with shadows and all of that to start. I will probably do some kits here and there of specific [makeup] looks I’ve done and keep it within the looks,” she said.

And while it may seem that KKW Beauty’s target demographic is anyone who uses social media, Kardashian said an emphasis on infusing makeup with skin-care properties “maybe gears a little bit more to my age.

“I am older than Kylie. We definitely have a different audience. We do have a lot of similar things — but we aren’t doing the same products, so we won’t run into that overlap. We’re really cautious of that. We work together to make sure that we don’t overlap like that,” Kardashian said, adding that her customer base could skew “pretty young” as well.

She added: “Ultimately, I think once it launches and people see we are a really different brand, it will be able to coexist, but be so separate.…[When] you work so hard at something, you do want people to see it for what it is.”