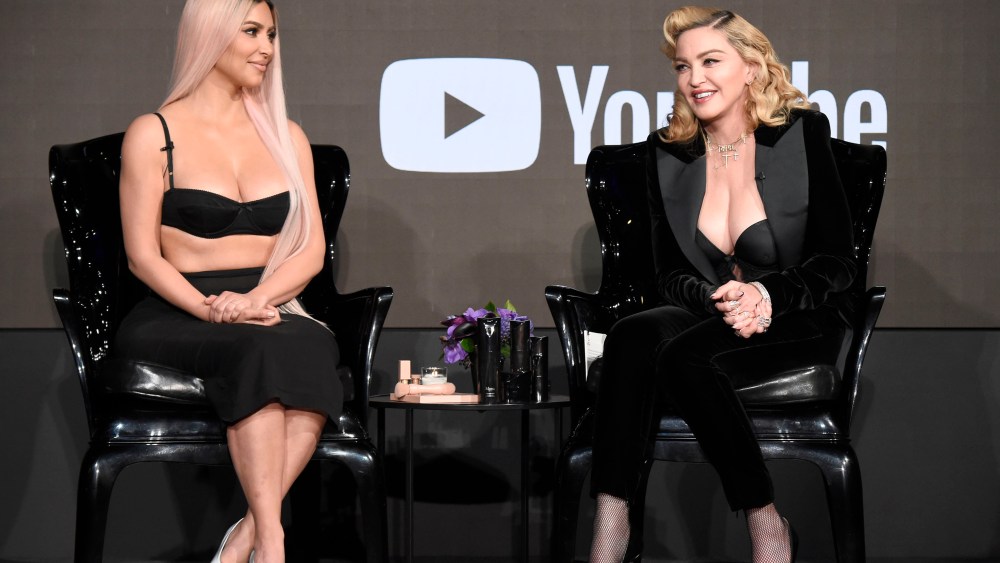 LOS ANGELES — Madonna and Kim Kardashian have more in common than just their celebrity.

First off, both are masters of reinventing themselves through physical transformation. For decades, Madonna vacillated between various blonde and brunette hairdos — she’s currently sporting a Forties-inspired victory roll — and made headlines every time she debuted a new cut, color or makeup look  (think her vampy “Ray of Light” era makeover in 1998). The same goes for Kardashian, who last week dyed her hair pink after spending months as a platinum blonde. The reality star took to Instagram to show off the new hue in a series of posts, including one of her eating noodles topless in Tokyo with a strand of strategically placed pink hair — for modesty?

But Madonna and Kardashian are also fast becoming skin-care and makeup moguls, respectively.

As for Madonna, her MDNA Skin line finally made its way to the U.S. last September, three years after it launched in Japan where parent company MTG is headquartered. The entire range — it reads as her name sans the second “n” or vowels — was codeveloped by the singer in partnership with MTG. Already, Tsuyoshi Matsushita, founder and president of MTG, maintained that within the first six months entering the U.S., MDNA Skin has “exceeded sales targets across the board.”

“Madonna is not just a celebrity endorsing the brand. She is truly a codeveloper of the brand…[she] absolutely does not compromise,” Matsushita told WWD. “Her passion for beauty is deep and her expectations are high. While the process requires dozens of iterations when it comes to samples and prototypes, we are able to develop superior products and a global brand as a result.”

Madonna, in town to launch MDNA Skin’s The Reinvention Cream and two new skin-care sets, greeted fans during a 10-minute personal appearance Tuesday at Barneys New York in Beverly Hills, where the line is sold exclusively. Following the public appearance, the singer joined Kardashian at the YouTube Space Los Angeles to talk all things beauty at an MDNA Skin-hosted event. The conversation was moderated by Kandee Johnson, a judge on Lifetime’s “Glam Masters,” which Kardashian executive produces.

On daily beauty routines:
Madonna: I sleep on my face so I wake up with puffy eyes. It’s the worst position to sleep in, so when I wake up my eyes look like 12 planets. I had to do something about it so I created these eye masks that I filled with eye serum and I put them in the freezer and then put them under my eyes.

I sip lemon water and I can’t function or speak to anyone or deal with life until my eyes are not planets. Then people can talk to me….[There is] a lot of ice in the morning — and caffeine. That’s the beginning of my beauty routine.

Kim Kardashian: My mornings are madness. Sometimes I get up at 5 a.m. to work out before I take the kids to school. It’s usually what I do. I go at 5:45, I’m home by 7. I just go next door to my mom’s house, she lives across the street [and has a gym]. I don’t know if I even wash my face in the morning before I take my kids to school. I just brush my teeth and get out of there.

On beauty inspirations:
Madonna: For me, it was about Hollywood glamour and stars, women like Marilyn Monroe, Rita Hayworth, Marlene Dietrich. They were the personification of beauty to me then…and they all look like they took good care of their skin. I don’t think any of them were sunbathers.

Those women were my role models in terms of skin care, but I grew up in the Midwest and sunbathing isn’t part of the culture there. So I avoided sunbathing and I never smoked. Those two things — until I could afford skin care — saved me.

K.K.: I really, really got so much skin-care advice from my mom and my grandma so I love treating my grandma to facials and skin-care products for her birthday and Christmas.

[But] honestly my mom [is my beauty inspiration].…[She] was a stewardess for American Airlines, and all the girls would save their money because there was some beauty class they would teach you. So when they stopped at the destinations all they wanted to do was take this class. My mom learned you should exfoliate your face with a hot washcloth at every washing. She’s seen the same facialist since she’s been 18 years old.

On when beauty first became important to them:
Madonna: For me personally, [beauty became important] when I started dancing. I trained to be a professional dancer and [it became important] when I started doing shows on stage and having people look at me and audiences and directors of my dance company scrutinizing me. When you become aware that people are watching and judging you, then you start caring about the way you look. Until then you’re spared the rigors of self judgment, whether you look good or not.

K.K.: I guess that makes so much more sense [agreeing with the above]. During our first season we didn’t get our hair and makeup done, and season two it was full force.

On new product launches:
K.K.: Next I have a collaboration with my makeup artist of 10 years, Mario [Dedivanovic]. We have a really cute collection coming out, something that we’ve worked on for a long time. And then I have concealers and a new fragrance coming out.

Resurrection plants are primarily found in Africa and they grow in sub-Saharan areas and sometimes they can go for months or even years without any water or moisture at all. They kind of go in on themselves and look like very unattractive shrubs…[but] you drop a few drops of moisture on them and they open up. A flower comes out of it and they reinvent themselves. We’ve been able to extract the stems cells from this plant and put them in this all-in-one cream.

To me it personifies resilience, and that’s me. Resilience and reinvention and that’s how we keep going. I love the connection to the plant, the connection to Africa and then finally, a portion of proceeds from all sales will go back to Raising Malawi [the nonprofit Madonna founded in 2006].

On the must-have products from their own lines:
Madonna: The Serum, The Rose Mist spray and the Eye Masks that I don’t speak to people until I use them in the morning.

K.K.: I started off with contour. I love contour; no matter what I’m doing, I always contour…[with] powder and cream, that’s pretty basic. I do have concealer coming out and in a kit because I do concealer in steps so I have the steps coming out. That’s my favorite concealer I’ve ever used — and I use a lot of concealer.

K.K.: Mine is just moisturizing. I love giving advice, though, people always come to me. I love analyzing someone’s face and going with them to a doctor and being like, “Wait, a little Botox here, a little drop of filler here.” That kind of advice, that’s what I love to give. People write to me — I won’t say who, but some people in the business, people that I’ve never met before, will text me and say, “Hey this is so and so, I heard you give the best advice. Can you look at my pictures and tell me what you think I should do.” I’m a huge liability.