"Winnie is someone that is making my kids’ lives a happier place," said Kardashian.

Kim Kardashian and Winnie Harlow are sealing their friendship with a lip gloss — or three.

The pair has teamed on a collection for Kardashian’s KKW Beauty brand. The collaboration, which launches today, includes a 12-pan eye shadow palette, three lip glosses and a highlighter duo. Speaking from a private dinner at Saks Fifth Avenue’s L’Avenue restaurant, where Harlow, Paris Hilton, Jonathan Cheban and Vic Mensa were also in attendance, Kardashian said the collaboration came about after she reached out to Harlow with a personal question.

“I reached out to her out of the blue with an autoimmune question that I thought she might be able to help me with,” said Kardashian, who unveiled her Skims shapewear line earlier this New York Fashion Week. “She was so gracious and took my call, was so open, gave me so much information. I really appreciated that from her and we formed a friendship that way. Winnie is someone that is making my kids’ lives a happier place because there’s kids at their school with vitiligo and she makes it acceptable and beautiful. I love her confidence and how she has not let anything stop her.” 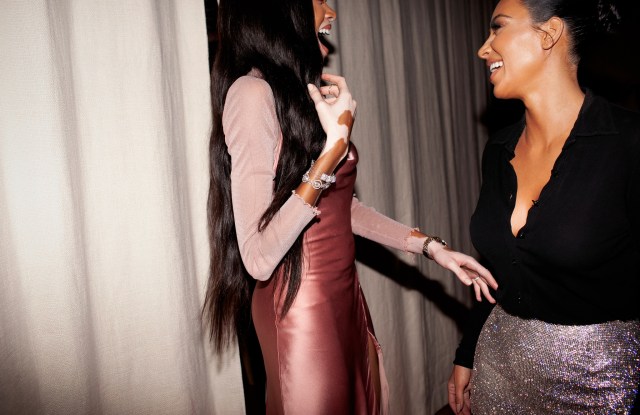 The KKW x Winnie Collection is Harlow’s first makeup product collaboration — and Kardashian’s first KKW Beauty collaboration with someone other than a family member or her makeup artist, Mario Dedivanovic. According to Kardashian, Harlow chose the colors for the eye shadow palette — “warm, rich jewel tones and a lot of shimmers” — which was a break from her go-to matte shades.

“I tend to do matte lips or lipstick and [Harlow] loves a gloss that’s a more sheer, juicy gloss,” said Kardashian. “I’ve been wearing glosses this whole week and I actually now love them.”

Harlow said she learned to do her makeup by watching videos from YouTubers such as Jackie Aina, Monica Style Muse, Patrick Starrr, SunKissAlba and MakeupShayla. She and Kardashian shot the campaign for their collaboration after attending one of Kanye West’s Sunday Services together.

“We went to Sunday Service in the morning and then went to Kris [Jenner]’s house to get showered and changed and then head to the studio,” said Harlow. “We shot all day. It was really, really fun. We created magic that day.”

Earlier this year, Kardashian’s half-sister Kylie Jenner debuted a skin-care range, Kylie Skin. Asked whether she would consider adding skin care to her KKW Beauty brand, Kardashian replied, “Yeah, I would. I would love it to all be under one home. The end of the year’s almost here, but I love planning out far ahead.”

At the top of the summer, Kardashian launched her Skin Perfecting Body Foundation, which quickly became KKW Beauty’s best-selling product.

“That was unexpected ’cause I use it all the time and I wasn’t sure if a lot of people were gonna gravitate toward that and understand it, but they do,” said Kardashian. “I’m wearing it tonight. Through the rain, it didn’t even budge — and that felt good. I’m the numbers person. I love coming up with an idea, seeing it through and seeing all of the analytics behind it.”

In February, Kardashian’s eldest daughter, North West, made her solo magazine cover debut in WWD’s Beauty Inc. The six-year-old has been experimenting with makeup over the past year; famed makeup artist Mary Phillips created her looks for WWD’s Beauty Inc cover shoot.

Asked if she would ever collaborate on makeup with North, Kardashian said she would — though perhaps she would need Kanye’s approval first.

“I would love to collaborate with [North] just to see what palette she’d pick out,” said Kardashian. “She loves my Fire palette and she loves to mess around with them and she ruins them all. But dad is on a no makeup kick. I think I overdid it with her wearing lipstick, so she can’t wear any bright colors. You know, for a Christmas Eve party she’d wear a red lip, sometimes she’d wear a black dress and wear matching black lips. Kylie would send over all these lip kits or she’d use the stuff that I have laying around if I’m trying stuff. So dad’s kinda mad at me right now about North and makeup, so I have to chill on that. I would love it and she would love it. But we’re gonna chill. She has the rest of her life to wear makeup, so we’re gonna tone it down.” 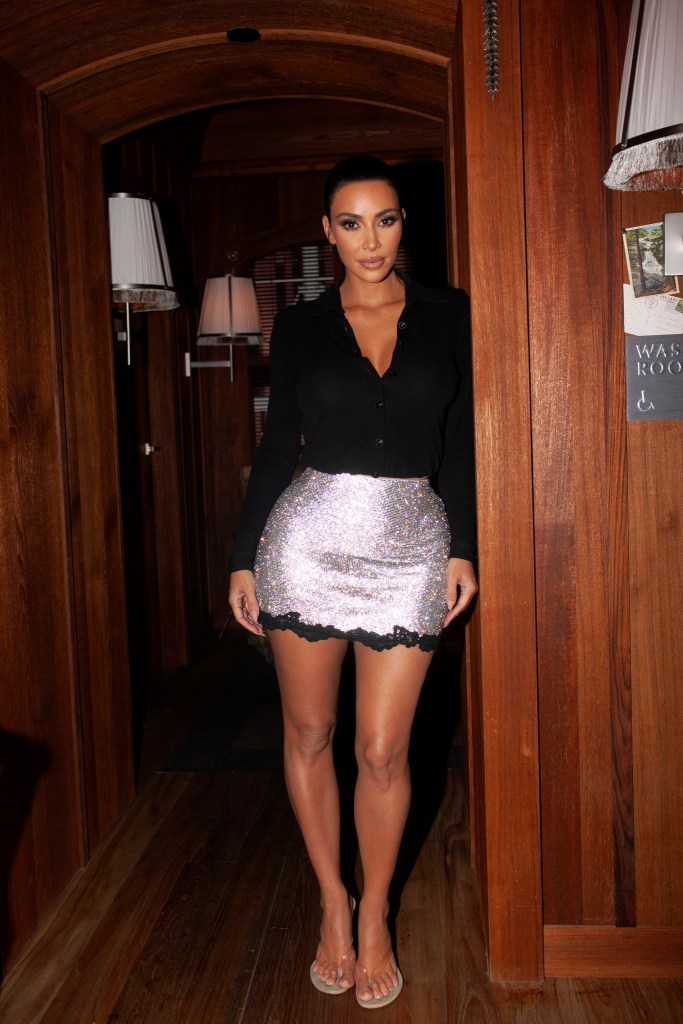