Through Poosh, Kourtney Kardashian Aims to Reach ‘the Modern Woman’

Poosh, said Kardashian, is a lifestyle web site geared toward the modern woman. But what exactly will it entail?

Kourtney Kardashian is making a push — a poosh? — into editorial.

Today, the eldest Kardashian sister introduces Poosh, a lifestyle web site and online destination geared toward who Kardashian described as “the modern woman.” The site, which gets its name from Kardashian’s six-year-old daughter Penelope, will span a variety of topics — including health, wellness, beauty, fashion, interior decor and kids — and will feature content penned by Kardashian, Poosh’s editorial team and a pool of guest writers, including Kardashian’s family members.

Speaking via phone last week, Kardashian said the project, which has been in the works for at least a year, is the first she felt “super passionate about” in years.

“The modern woman, in my opinion, is somebody who cares about the planet, cares about what we’re putting in our bodies from the inside out, and just doing our best without feeling judged for not being perfect,” she said. “Just because we care about those things or want to be eating healthy or living a certain lifestyle, you can still be cool and sexy and have it all. I don’t want it to feel judgmental, just really like a conversation.”

For Poosh, Kardashian assembled a small editorial team that consists of chief operating officer Sarah Howard, Kardashian’s high school friend and founder of the blog Beauty Banter, and managing editor Michelle Scanga, a blogger who joins Poosh from Who What Wear. In a phone call with WWD, Scanga said Howard reached out to her about the job via Instagram. 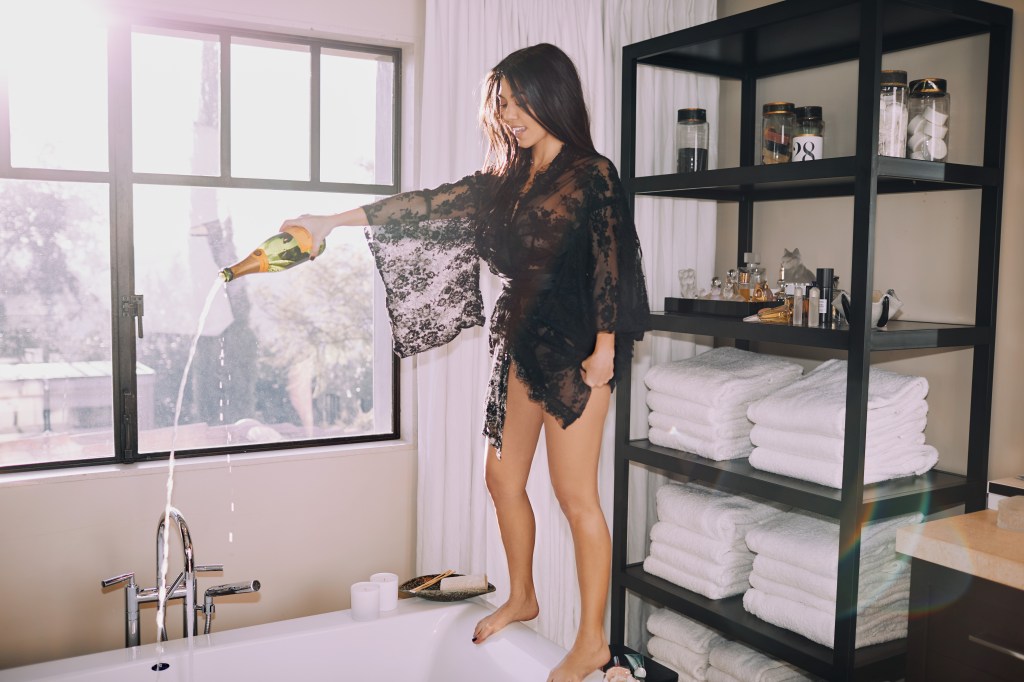 Kardashian’s description of Poosh as a lifestyle web site for the modern woman is, admittedly, nebulous. Lifestyle content can translate to a wide range of topics and the notion of who the modern woman is varies. Asked what exactly Poosh’s editorial strategy will be, Scanga reiterated Kardashian’s original concept, furthering its vagueness.

“We’re basing the [editorial] strategy on our brand ethos that Poosh is a destination for the modern woman to live her best life,” Scanga said. “Poosh was built with the modern woman in mind, but we’re an inclusive site that’s open to everyone regardless of gender, status, and we want everyone to know that their best life is within reach.”

Howard added that the web site aims to democratize the life that Kardashian has built for herself. “We want to show that this modern way of life that Kourtney has etched out is achievable by all,” she said. “You don’t have to be a celebrity, it doesn’t have to be so elitist.”

New content will go live on the site daily, said Howard, and Poosh will cross-promote the content via its social channels, including a YouTube channel. The site has a set number of verticals, said Howard, though these “will be ever-changing.” The site will include affiliate links to products of varying price points curated by the Poosh team, with an official e-commerce component to come.

The arrival of Poosh comes as beauty and wellness are increasingly intertwined. It’s not uncommon for celebrities — including Kardashian’s family members — to play in either space. Kardashian herself is no stranger to the online world — 75.6 million Instagram followers, her former app. She has also previously dabbled in beauty as a global ambassador for Manuka Doctor and an advocate for stricter beauty standards.

Last year, Kardashian began working with the Environmental Working Group and went to Washington, D.C., to help the organization brief staffers of the Senate Committee on Health, Education, Labor and Pensions on the Personal Care Products Safety Act. Kardashian had already conceived of Poosh before working with the EWG, though the organization has helped shape her own beauty regimen and some of the content she hopes to share via Poosh. Using the Skin Deep database as a reference, she recently rid her bathroom of products rated more than three on EWG’s score system.

“I got rid of so many things — even my kids’ hair gel that’s made for kids was a horrible score and I had no idea and I was so upset about it,” she said. “The other thing about the importance of the law with Congress that we’re hoping gets passed is we shouldn’t have to be doing this. We shouldn’t have to be, as consumers, going into a store and scanning every product and going through our whole bathrooms or having kids’ products that are hazardous to our children. It will bother me when people are like, ‘this is something that you’re fighting for is beauty reform?’ Every single human for the most part uses some kind of personal care product — toothpaste, deodorant, lotion, sunscreen — it’s not only makeup. There are many other causes that I’m passionate about and would love to start getting involved in more, but I’m just like, let’s get this passed and move on.”

Kardashian’s family members, she said, are also on board with Poosh. Sister Khloé has shown her support and daughter Penelope seems to like the idea that the brand is named after her.

“Khloe’s like, ‘I can’t believe this is actually happening,'” Kardashian said. “I feel so inspired and excited. When I’m really into something, I get really into it. My brain is always going and thinking and I’m a perfectionist, too, which I think is why having a really good team is important to me because I need people working with me that are just as much perfectionist as I am. The name is the nickname that we call Penelope. Sarah and I, we’re like, ‘How do you feel that we’re naming our big project Poosh?’ [Penelope] is like, ‘Oh, good.’ She’s so funny. She’s my little muse. I love her freedom she has with fashion, she loves beauty, she has the best personality, she’s really creative and artistic and into music. She’s the coolest little girl in the world. She’s our little Poosh muse.”