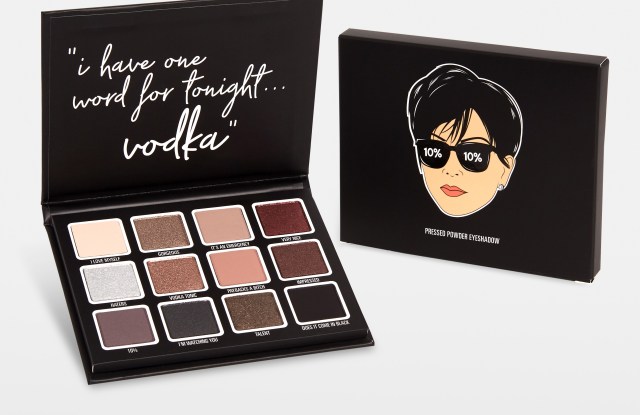 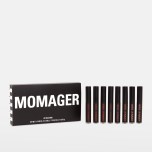 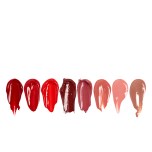 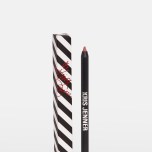 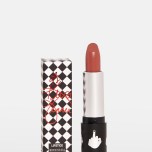 When she was pregnant, Kylie Jenner had an idea: Why not do her next collaboration with her mom, Kris Jenner?

“I actually made the whole thing and then presented it to my mom, and she picked all the colors and all the names,” Kylie Jenner said. “I just had this idea of how funny it would be for her to just take over the whole Kylie Cosmetics — we really defined it in like, a day. It was so easy — she was so much fun to work with.”

Ready to get down to business, Kylie told Kris to start coming up with names while she stepped out to another meeting, she said.

“I was like, ‘All right, you guys think of names, and when I come back I’ll help you guys finalize it,” Kylie said. “I maybe left for 15 minutes and when I came back my mom thought of everything already. Every single name was picked and they read me all the names.…I was dying laughing, because the names are just so funny and all the quotes that my mom is like, known for.”

Those quotes include Kris’ “momisms,” like, ‘You’re doing amazing sweetie!’, ‘Your sister’s going to jail’ and ‘It’s an emergency.’

For the Kris x Kylie Collection, which launches exclusively on kyliecosmetics.com on Sunday, Mother’s Day, at 3 p.m. Pacific Standard Time, Jenner is introducing a lip collection with liquid lipstick and lip gloss with velvet and matte finishes; an eye shadow palette; face palette, and cream lipstick and lip liner. The mother-daughter duo expect the collection to appeal to shoppers in both of their age demographics, they said.

The Jenners have turned Kris’ famous “momager” title into a lip collection (the Momager Lip Kollection has eight shades and is priced at $42).

“The word means mom and manager kind of morphed into one,” Kris Jenner said. “I love that it starts out with mom, because that’s really the job I love the most in my entire life, and my existence is being a mom. The fact that I’m also their manager is just the cherry on top, because it’s really the best job in the world.”

Other products include the $42 12-shade eye shadow palette, inspired by Kris’ go-to smoky eye; a highlight and blush palette, also $48; plus a neutral pink lipstick, $17, and lip liner, $12, in the shade “Give Me a Kiss.”

“I really focused on doing the eye shadow palette in cooler tones because my whole life I’ve loved doing a smoky eye,” Kris Jenner said. Her aim was for the colors to carry customers from day to night, she said.

“They’re just my favorite tones and shades from literally day to night — so if you want to glam it up a little bit, that option’s there with some of the shimmery ones,” Jenner said. “I’ve seriously been doing my eyes like that since I was like, 16.”

And she does indeed do her own makeup — if the family isn’t filming.

“I like doing my own makeup. I’ve always had a lot of fun with makeup,” Kris Jenner said. Kylie, though, has yet to do her mom’s makeup, she noted.

It would be Kris’ second — she shot her first Thursday morning with superinfluencer Patrick Starrr.

“It was the first time I’ve ever done an official YouTube tutorial and you know, it’s no joke,” Kris Jenner said. “It was very professional.…I really admire and take my hat off to all the influencers and YouTubers out there who are working diligently every single day on their brands because it’s a lot of work.”

Kris has also taken over the Kylie Cosmetics Instagram account, which has been temporarily renamed Kris Cosmetics.

This isn’t the first collaboration for Kylie Cosmetics, which released a KKW by Kylie Cosmetics cream lipstick before fully launching her own line, KKW Beauty. Asked if the Kris x Kylie Cosmetics launch was a precursor to a Kris Jenner beauty business, Kris said, “The focus right now is Kylie Cosmetics…but you never know.”

“But will there be more Kris and Kylie things? There might be a round two,” Kylie said.

Kylie started off with e-commerce-only lip kits in 2015, but has expanded the business into other makeup categories and pop-up shops. According to Kris, Kylie’s already designed the collection through the rest of the year, and is starting to work on products for 2019. For 2017, industry sources estimated the business did $330 million in sales.

“I have such loyal customers and people who are genuinely fans of my makeup and me, and Kylie Cosmetics just keeps growing,” Kylie said. “I hope to be worldwide and open my own store one day.”

“Eventually, the end goal is being a major global brand, so that it’s not only available online internationally, but actually found internationally in retail space,” Kris Jenner said.