The panelists discussed the significance of normalizing diversity across all industries.

Agency Guacamole, a Los Angeles-based public relations agency that specializes in beauty and lifestyle, held a virtual panel on Wednesday showcasing Black voices to discuss diversity. Started in 2018, the initiative, “Beauty, Lifestyle and Nurturing Diversity,” is held to create more inclusivity for the underrepresented, people of color, the disabled and LGBTQ communities. This year, the focus was on amplifying Black voices and discussing the Black Lives Matter movement’s impact on industries.

As part of the third annual event, the firm’s founder, Bilal Kaiser, featured moderator Jazmyn W., as the comedian and TikToker is known; Barbara Jacques, creator of plant-based beauty brand Jacq’s Organics; Saleam Singleton, writer and content creator who specializes in beauty and men’s skin care, and Sarissa Thrower, communications lead of entertainment, music and creators at Instagram with 15 years of experience in strategic messaging campaigns for the likes of L’Oréal and Disney.

“There’s been a lot of — we’ll call it pandering because it’s what it is — this year,” shared Thrower. “People stepping down as ceo. People saying that, you know, if there’s a Black cartoon character, and I’m a white person, that I shouldn’t play that cartoon character. There was a ‘[The] Golden Girls’ episode where they wore mud masks, and ‘We’re going to pull that episode.’ We know a mud mask when we see one. You don’t need to pull a ‘Golden Girls’ episode. It’s fine. But the reaction that I always have is put your money where your mouth is. I don’t want to hear you talk about it, I want to see you spend.”

All three panelists highlighted the importance of normalizing diversity in the workplace across all industries.

“I want to see representation from all skin tones, shades, body types on your platforms and the media that you share in your collateral and assets,” continued Thrower. “I want to see representation in your hallways and in your employees…in p.r. but also in sales, in marketing and your executive teams, so that the people that do your hiring, the people that are in the leadership positions, so your chief of operations, head of sales, chief executives, if they are not a person of color…than they should be empowering people who are to make those decisions, period. I don’t want to hear that you’re sorry. I want you to stop needing to be sorry.”

Lack of diversity at the top contributes to significant matters that arise globally in all sectors. Research has shown, for example in the U.S., that cosmetics and hair products marketed to Black women are more likely to contain harmful chemicals. It’s due to universal beauty standards, the use of skin lighteners and hair relaxers, but it’s also because of the lack of diverse representation among the decision-makers, Jacques said.

“I sometimes have conversations with investors where they’re like, ‘Yes, we love your brand. We would really love to do X, Y and Z,’ and I’m like, ‘OK, what does your board look like? What does your staff look like? Are there any people of color?’ And the answer is no,” Jacques said. “If you definitely want to help me, and you’re coming on as an investor, how can you help me speak to my customer if there’s nobody there that looks like my customer?”

It’s “about holding people responsible” so that the movement isn’t just a trend, she added. “We know this happens every time. Dropping a person of color every 10, 20 pictures in on your [social media] feed and just dropping it in your marketing campaign is not enough, because we know behind the scenes, there’s no…diversity.”

And “it’s not enough to just have me sitting next to you and be on your team,” chimed in Jazmyn W., who has past experience working in human resources. “You have to make me feel comfortable enough to voice my opinions.” 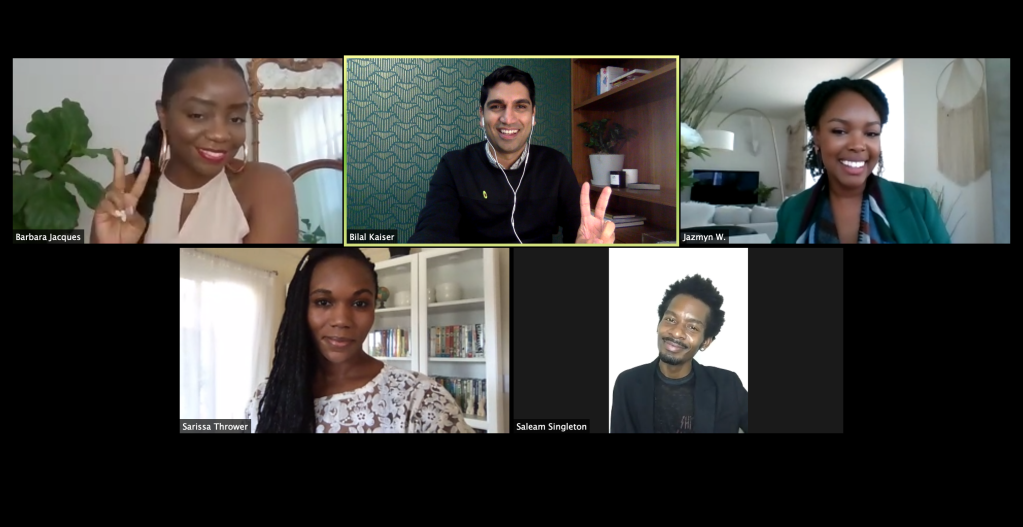 Singleton noted the widely used terminology that has existed in business identifying Black consumers as falling under “urban marketing.”

“The idea of the Black consumer has changed and not changed in many ways in the last 20 years,” he said. “I think the change has been, one, the voice of the Black woman has been getting louder and louder every few years…and that influence has been seen and brings us to where we are now. Obviously, men like myself wouldn’t have a space if we weren’t ushered in by Black women in content creation like [YouTuber] Jackie Aina or women of color like Michelle Phan. Women of color who have really created a prototype for us having spaces in the beauty community…I will say, I’m seeing more and more beauty and skin-care companies being created for men of color. I think it’s huge, because it’s becoming normalized.”

The three agreed that social media influencers are key to magnifying a brand, and that microinfluencers — who are less known and have fewer followers — shouldn’t be overlooked. In the age of rapid misinformation, level of audience engagement is far more valuable than follower count, Thrower said. “It’s trust.”

When a panel viewer asked about the “oversaturation” lately of Black beauty brands, Jacques said it wasn’t the case. Black women have been creating their own beauty products for “the longest time,” she said. “Now, there has been a resurgence in us actually selling and buying it, let’s just be real.” And it’s for many reasons, including the lack of products available for Black people on the market.

And there’s still a void, said Jacques: “If it’s not us fighting…to fill that void that is missing out here, who’s going to do it?”