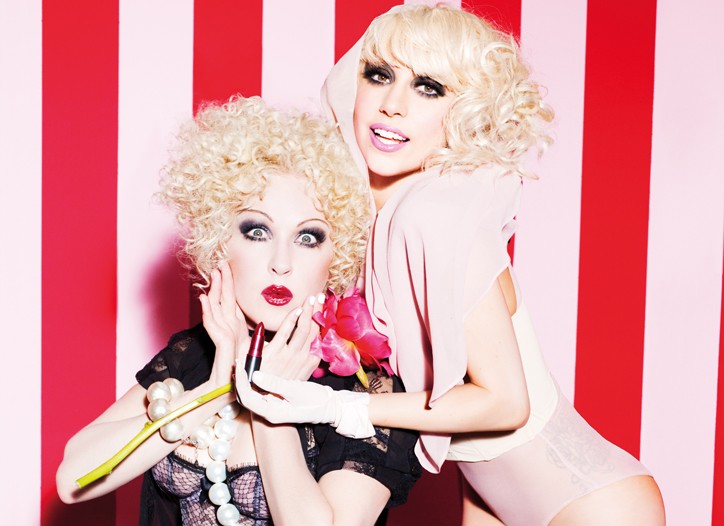 Gathering two of music’s most eccentric (and eccentrically dressed) personalities in one room at a restaurant known as a cross-dresser paradise is a recipe for spontaneous personality combustion — especially when the two in question are Lady Gaga and Cyndi Lauper at Lucky Cheng’s in Manhattan.

It’s a sartorial match made in heaven (or, for some, that other place) — Lauper, who rose to fame in the Eighties as much for her outrageous getups and rainbow-hued hair as for her number-one records, and Gaga, who wears everything from a hair bow made of her own hair to Giorgio Armani Privé. It’s also a meeting to talk about sex: specifically, the ad campaign for the MAC AIDS Fund, where the two have teamed up. Both women are expected to make personal appearances on behalf of the initiative.

On this day, she’s clad in a sparkly Marc Jacobs bustier, nude fishnets and a pair of six-inch platform heels — and announces proudly that she had an AIDS test two days before. Lauper, music’s original girl who just wants to have fun, is clad almost conservatively in a black jacket, black skinny pants and black ankle boots, and is positively maternal toward her young charge, making sure she has a cup of tea and calling her Booboo. The outrageous Gaga, 23, obviously finds the daughter role comfortable.

Mother and daughter they may not be, but Lauper definitely paved the way for Gaga’s getups — and Gaga obviously appreciates it. “Everyone was saying I looked like a crazy trannie, and I was like, ‘Thank you,’” says Gaga. “Then when I met her for the first time, Cyndi saw me in the hallway and said, ‘You look great, kid. Take no prisoners.’ She understood me.”

“We lucked out,” says Lauper. “When we met each other, we liked each other and are interested in the same type of things. We laugh about similar things.”

And both obviously worship offbeat footwear. “I used to waitress in these shoes,” Gaga says, gesturing to her footwear, which has what looks like stacks of gum balls for heels. Lauper exclaims, “Get out!”

“Yes, every night,” continues Gaga. “On Cornelia Street, at Palma — the other waiters got so mad, because they had full careers at the restaurant, and then I came in in my little heels — you always make more money in heels. And I never did the romantic tables, because the girlfriends would get mad.”

“There you go,” Lauper says wisely.

As an aside, Gaga adds, “Did you know WWD was my first cover? Ever! It was about five years ago, and I was at Lollapalooza, and you guys took my photo and asked if you could do a story. It was before anyone knew who I was. So this is very special for us.”

Lauper, 56, has a similar story to tell. “I did a Women’s Wear thing where everyone wore white, and I got so excited that I even did my hair white,” she says. “Everything was white — my hair, my nails, the suit, the shoes, everything. But then when I saw myself, I didn’t fit in. I kind of looked like Martha Washington.”

Neither Lauper nor Gaga has ever wasted too much time trying to conform to any particular standard look, Gaga’s Convent of the Sacred Heart school uniform notwithstanding. “When I was young, I felt like a freak in school — and I had to put my makeup on when I got home before I went to bed because I wasn’t allowed to wear makeup in school,” she recalls. “When I walked around the corner and saw Boy George in the window [of a MAC store], I said, ‘I feel just like that!’ Why is that attitude nowhere else? And RuPaul, and Pamela Anderson.…I said, ‘Gosh, I feel just like that.’ And when I saw David Bowie and Cyndi Lauper for the first time — I felt just like that. That’s why I think MAC is so important; they cater to that inside of you that feels like a freak sometimes, that wants to raise your freak flag.”

Gaga also has fond memories of watching her mother’s morning beauty routine: “I’d sit on the toilet and watch her set her hair every morning — she’d put in a curler and hand one to me, and I’d be trying to pin them in and they would be falling everywhere. Next, she’d hand me the lipstick and I’d put it on. That was my first relationship with beauty — I was six years old — and if you can believe it, my mother’s name is Cindy. What I’m hoping, with this [MAC] campaign, is to create this mother-daughter energy, where mothers feel that they can buy the lipstick for their daughters — ‘Here’s your first lipstick, and let me explain to you what it means.’”

“Easy!” Lauper mock-huffs at the mother reference. Gaga backpedals with a laugh: “Obviously, you couldn’t be my mother, Cyndi!” Lauper swats back, “Of course I could! Ga, you’re 23. You could be my kid, easy.”

Regardless of their age difference, the two pop stars clearly feel committed to their roles as the new spokeswoman for the MAC AIDS Fund.

“I love to use my fame to get other points across,” says Gaga. “That’s part of who I am.”

Each has created a lipstick for the cause. While Gaga and Lauper are both head over heels for Russian Red (the matte tomato red perhaps best known for being Madonna’s favorite shade in the Eighties) — “It’s in my bag right now!” exclaims Gaga — and Lauper is rather fond of the collection MAC did with Dame Edna, they’re equally excited over creating their own lipstick shades. “I do love to mix Russian Red and Lady Danger,” says Lauper. “But what really sells is the softer colors, because they’re easier to wear.”

Gaga concurs: “Every woman can relate.”

They are wearing their creations: Lauper’s is a light coral red, Gaga’s a bubble-gummy pink. Both retail for $14 and will be available in MAC stores in North America beginning today (global markets will get the colors in March). For the first time in Viva Glam history, the lipsticks are named for the women who created them, and their signatures are scrawled on the lipstick tubes. “In the Eighties, I put lipstick everywhere, not just on my lips,” reminiscences Lauper.

“We are really looking forward to seeing that lip color on condoms all over the world,” says Gaga. “We want to make this trendy and fun. We don’t want this discussion of AIDS to become this overly intellectual discussion, because we need to make discussions about AIDS really normal — not sitting in school nodding off because your teacher’s handed you some sheet that’s like all these percentages and graphs, and you’re thinking, well, she probably hasn’t had sex in 15 years. Sex education should be bright and vibrant and every woman should want to have this in her purse.”

“A woman who hasn’t had sex in 15 years is probably more vulnerable,” Lauper shoots back. She, too, is passionate about her causes, especially gay rights; she has founded the True Colors Fund, which raises money for the lesbian, gay, bisexual and transgender community. However, she’s straight, married and the mother of a 12-year-old son — and anxious to reinforce the message that AIDS can happen to anyone, including 50-plus women.

“We’re made to feel like when we turn 50 we’re not a sexual being anymore — that’s not true in real life,” Lauper says. “You’re still a sexual being and you’re still going to have urges where you lose your mind. That’s why cases of AIDS in women my age are on the rise. A lot of people mistakenly think it isn’t a straight-person’s disease. It is an every-person’s disease. No one is immune. Everyone in the demographic between me and Gaga is affected.”

“Buying condoms is seen as a male accessory,” says Gaga. “We were joking that we wish the lipstick had on the side, ‘Where’s my best friend, the condom? Come out with me tonight.’ The lipstick should be a reminder to practice safe sex on their own, as opposed to hoping that the guy they went out with has it in a drawer next to his bed.”

Cracks Lauper: “Yes, and I burned my bra at the first Gloria Steinem demonstration.” Turning serious, Lauper adds, “During the age of the hippies, all of a sudden it was a sexual revolution and everyone was free — but the woman still wasn’t free, because if you didn’t put out, you weren’t cool. So you didn’t even have the choice to not put out. You had to put out. It never was a women’s empowerment.

“You can say ‘Abstain from sex,’ but the truth is, we are all sexual beings, and people don’t,” Lauper insists. Adds Gaga: “It’s unrealistic.”

“I come across in all my videos and all my music as this sexually empowered woman, but even I say no,” says Gaga. “Just because you are a sexual woman doesn’t mean you are dumb.”

She’s also quite passionate about the no condom, no sex issue, insisting that all women should carry condoms in their bags: “When the guy that she’s seeing says, ‘Baby, it doesn’t feel good when I wear that,’ or ‘Baby, it’s just you,’ you say, ‘F–k you, I’m out of here.’ I don’t want to be with a guy who feels like that. What does that say about who they’ve been with before? You have to be worried about yourself, because it can happen to you.”

The ad campaign, conceived by James Gager, senior vice president and creative director of MAC Cosmetics, was shot by Ellen von Unwerth. It will begin running in April fashion, beauty and lifestyle magazines, as well as a few weeklies later this month. “Cyndi looks sexy, I look sexy — I think it’s a more feminine side of me,” says Gaga.

This year, Viva Glam is focusing on the increased risk women face in terms of HIV/AIDS infection, notes John Demsey, group president of the Estée Lauder Cos. Inc. and chairman of the MAC AIDS Fund. “The litmus test for this campaign is that each person has to be able to stand in front of a MAC audience and be passionate and believable about this,” he says. “Because both of these women are so iconic in an alternative world as well as with young people, the juxtaposition of the two of them takes Viva Glam to a new level.”

While Demsey declined to discuss sales projections, industry sources estimate the two new lip colors could generate at least $20 million at retail in total in their first year on counter.

“Women need to get tested and they need to know their status,” says Nancy Mahon, senior vice president of MAC Cosmetics and executive director of the MAC AIDS Fund, noting the number of women contracting HIV is growing in every area of the world, especially in the U.S. — where the number of women living with HIV has tripled since 1985. “We need to raise a lot of money because we have a lot of work to do.”

MAC will donate an additional $2.5 million to fund model programs that address the increased risk women face in terms of HIV/AIDS infection.

The MAC AIDS fund has raised more than $160 million to combat HIV/AIDS since its founding in 1994, says Demsey. Previous spokespeople have included Mary J. Blige, Fergie and Lisa Marie Presley.