L’Artisan Parfumeur Goes Back to Its Roots

PARIS — L’Artisan Parfumeur mined its heritage for a new flagship in the French capital and development strategy.

“We have gone back to the very roots, the essence of the brand,” said Thomas James, vice president of niche brands at Puig, who explained that’s apparent in L’Artisan Parfumeur’s name.

“It’s a French name — we are a French brand,” he said, adding that “l’artisan” refers to craftsmanship and “parfumeur” to perfumer. “We felt the perfumer was out of sight. So what we have done is go back to the vision that Jean Laporte had when he created the brand.

“The first thing that he did was to create a fragrance inspired by banana,” said James, of the French chemist-turned-perfumer. “He laid the foundation for the future of the brand in taking something from nature and turning it into a fragrance.”

“We talk about reinventing nature through fragrances,” said James.

Perfumers — 26 have collaborated with the brand — are given carte blanche to create L’Artisan Parfumeur scents.

“There is no brief,” said James. “It’s giving freedom to the perfumer to express his own vision of nature. We work together in a very organic way.

“Craftsmanship is essential,” he continued. “The craftsman at the heart of this creation is the perfumer himself.”

L’Artisan Parfumeur’s new flagship at 209 Rue Saint-Honoré reopened on Saturday after debuting for just a few days prior to France’s second coronavirus-related lockdown in October.

It serves as “the opportunity also to display the brand values,” said James.

Puig, which acquired L’Artisan Parfumeur in 2015, first focused on the brand’s positioning for two years. Some doors were closed, for instance, and 2020 has been the year for redeployment.

The 555-square-foot flagship, its sixth boutique in Paris, is meant to be reminiscent of Laporte’s atelier and the brand’s first shop, opened in 1979 on Paris’ Rue de Grenelle. 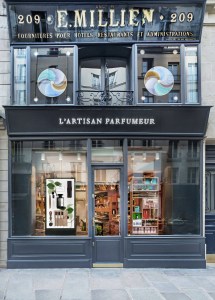 Perfumers are to make appearances there to share the stories of the scents they created for the brand.

“We want this place to be not only a sales point, but also a place of exchange,” said James.

Leather fragrance cases can be personalized in a small in-store atelier.

Of the store, James said: “It sets the tone for where the brand will go.”

France remains L’Artisan Parfumeur’s largest market, in which it also sells in stores such as Printemps and Galeries Lafayette.

The label is notching up strong growth in China, as well, where it launched on Tmall this fall.

Clientele is widespread geographically, including coming from elsewhere in Europe and the Middle East, according to James.

“We have a great potential to extend the footprint of the brand, with a very high ambition,” said James.