Donald Trump and Estée Lauder Cos. team for Donald Trump The Fragrance, which will launch in Federated stores in November. 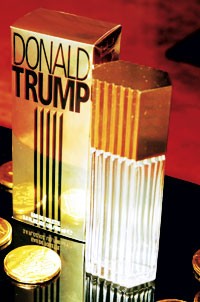 As if the real estate mogul and reality TV star weren’t ubiquitous enough, the Estée Lauder Cos. now plans to turn Trump into a beauty titan. Lauder on Thursday confirmed a deal to launch a fragrance called, simply, Donald Trump The Fragrance. It will initially be sold exclusively in Federated Department Stores doors beginning in mid-November.Stores doors beginning in mid-November.

This news confirms a WWD report that ran on Friday, Sept.17.

For those who may groan at the idea of the scent of The Donald, be forewarned: Lauder and Trump have big plans for the brand and even hint it could eventually do over $100 million in sales — and that’s at the low end of Lauder’s aspirations for the project, said William Lauder, chief executive officer of the Estée Lauder Cos. It could net Trump a cool $2 million a year in royalties.

Lauder has said publicly on more than one occasion that the company will only entertain new brands with the potential to ultimately reach that kind of volume. “We’re exploring all our options to build this into a megabrand,” said Lauder. “We all want this to be huge.”

“Donald Trump has developed into a lifestyle brand — from his real estate and his hotel empires to his best-selling books and apparel,” said Fabrice Weber, president of Aramis and Designer Fragrances, whose division will oversee the brand. “The fragrance is clearly a piece of that universe. We want to be number one wherever we are with this scent.”

That works just fine with Trump’s lofty goals for the brand: “I like to be number one,” he said in an interview in his offices Thursday.

Speaking of number-one status, Trump’s top-rated reality show on NBC, “The Apprentice,” which draws 41.5 million viewers a week, returned to the screen for a second season on Sept. 9, and Levi Strauss & Co. has said that one task for the contestants on this season’s edition will be to freshen marketing plans for the Levi’s brand. Trump told WWD Thursday that he would like to issue a similar challenge to his apprentices to create a marketing plan for future additions to his beauty brand. Such a project, he said, would likely come in the show’s third season.

As well, “The Apprentice” is involved with a number of household names this season, said Trump, who reeled off a list that included Pepsi and Cunard. Thursday’s episode was slated to unveil a new toothpaste from Procter & Gamble, Crest Vanilla Mint. “The first year, we were selling lemonade,” Trump said with a chuckle, “and that was fine, too.”

The terms of the deal were not disclosed, and neither Lauder executives nor Trump would discuss financial particulars, although Lauder said with a laugh, “it’s a beneficial deal for all parties.” But industry sources estimated that Trump will receive royalties of about 5 percent from Lauder, and an industry observer noted that many celebrity deals are for at least three years, with renewable clauses.

While the charismatic, self-professed billionaire has been approached with a number of potential fragrance deals over the years, he said that he chose to work with Lauder for a number of reasons — among them, a longtime friendship with William Lauder and his father, Leonard, who is chairman of the company. “William has been a good friend for a long time, as has Leonard,” said Trump. “I was never energized to do a fragrance until William called.”

When asked what his favorite smell — aside from money — is, Trump chuckled as he replied, “I’d really be in trouble if I told you that.”

Presumably, Trump’s eponymous scent, with accords named for his business acumen, includes at least a few of his favorite ingredients. Formulated by Firmenich, the scent’s three accords — or top, middle and drydown notes — include “Confidence,” a top note with bright citrus, refreshing mint, cucumber and black basil; the middle accord, “Success,” with green and aromatic notes rounded out by spice and pepper accents, and the drydown accord, “Character,” which includes exotic woods, herb notes and vetiver.

The Trump fragrance brand will launch with one product, a 3.4-ounce bottle that will retail for $60. The sleek glass bottle is a ridged geometric shape capped in gold, which is intended to be reminiscent of Trump Tower. The outer packaging is of gold with black accents and a black interior.

Trump said that future plans include a women’s fragrance, men’s and women’s ancillaries, as well as “as many scents as the market will support.”

When asked what his target market for the first fragrance was, Trump — who noted that he’s currently mentioned in about six rap songs — said that he believes the scent will appeal to a broad range of men, “including people of very substantial means, and urban consumers.”

“Like everything Donald does, this will be a very aspirational product,” said Lauder. “We think it will have exceptional appeal.”

Because the Trump brand is heading to market so soon after being created, the decision was made to initially do an exclusive distribution deal with Federated Department Stores, said Weber. The agreement will take the scent into about 400 of the chain’s doors, including Macy’s and Bloomingdale’s nationwide, by Nov. 15.

“There simply wasn’t time to produce the quantity [of product] that we would need for a multimillion-dollar launch for this holiday season,” said Lauder. “But rather than wait, we wanted to capitalize on the success of ‘The Apprentice’ for this holiday season — which meant that we could go only into a small number of doors at first.” Federated, due to its heavy concentration in New York City — a key Trump territory — as well as its presence elsewhere in the U.S. made the retailer the logical choice, said Lauder.

“Our concern was to have an adequate supply of this fragrance for the holiday selling season,” added Weber. “While we would have loved to have had the fragrance everywhere at once, we need time to produce more of this scent — as we are sure it will be a blockbuster.”

In 2005, the brand will expand to other U.S. department store doors. Eventually — and possibly in 2005 — the brand will be launched globally, said Lauder.

And Trump doesn’t rule out the occasional public appearance to promote the scent, although his jam-packed schedule isn’t likely to afford him the opportunity to do a great deal of them. “I’m a little busy,” he said, somewhat ironically, “but I want this to be a big business. I like being number one. It’s better than losing!”

Extensive national print advertising is planned, both at launch and beyond, said Weber; a list of the specific magazines in which ads will appear has not been finalized. The ads, created in both single-page and spread formats, feature Trump and his fiancée, model Melania Knauss, in Trump’s boardroom. The campaign has been shot by Mario Testino.

Trump’s deal is the latest in a slew of celebrity beauty deals signed over the last year — although Lauder is quick to point out that Trump isn’t a typical celebrity, as in a fashion designer or actor. “Donald is unique, which we think will work in our favor,” Lauder said. “We like to think out of the box, and this is an example of that thinking.”

The Trump fragrance is yet another sign of the changing landscape of the fragrance business and the revival of celebrity scents. And Lauder is leading that transformation as much as any beauty company. Early this year, Beyoncé Knowles teamed up with Tommy Hilfiger Toiletries’ for the new scent, True Star, and in May Lauder linked up with Sean “P. Diddy” Combs to develop a Sean John beauty collection.

But Lauder isn’t the only one. In early September, Kimora Lee Simmons and Coty signed a beauty license; actor Alan Cumming signed with Christopher Brosius’ new indie firm to do his own fragrance, coming in February, and in May, Trump’s fellow reality TV star, Paris Hilton, signed a deal with Parlux to do a fragrance that will roll out in November. Britney Spears inked a deal with Elizabeth Arden for fragrance, skin care and color cosmetics in March and has a scent, Curious Britney Spears, rolling out now. The mass side includes Coty’s deals with Mary-Kate and Ashley Olsen and Celine Dion, as well as an agreement announced by ABC Daytime and Wal-Mart to produce an “All My Children” fragrance, which will be “created” in a storyline on the soap, then sold in Wal-Marts beginning early next week.

Spokesperson gigs are just as hot, with the latest being Kim Cattrall’s deal with Liz Claiborne Cosmetics (see related story on page 10.) Others signed recently include Nicole Kidman’s deal last October to represent Chanel No.5; Charlize Theron’s August agreement to be the face of Dior’s J’adore; Scarlett Johansson’s February signing to be the face of Calvin Klein’s Eternity Moment, and Ashley Judd’s June pact to front American Beauty, the new BeautyBank/Kohl’s brand coming from the Estée Lauder Cos. next month. The second of the Kohl’s brands, Flirt, will be headlined by a different star each season, with the first, songstress Michelle Branch, coming in October.

Other stars currently filling the prestige world’s galaxy include Jennifer Lopez for Coty’s Lancaster division, who is widely credited with singlehandedly reviving the celebrity fragrance genre; Liv Tyler, the face of Givenchy’s Very Irresistible Givenchy and Givenchy’s new makeup line; Catherine Zeta-Jones, the face of Elizabeth Arden’s eponymous products — and beauty’s elder stateswoman, Elizabeth Taylor, who has created fragrances under her name with Elizabeth Arden since the Eighties.