The legendary 75-year-old actress and model talks skin care, #MeToo and what she's most proud of.

Lauren Hutton has seen your ageism — and she has chosen to carry on regardless.

The model and actress made headlines in July when she walked the runway at Valentino’s fall 2019 couture show. Wearing a green silk dress with pink sequin gloves, Hutton was such a sight to behold, Naomi Campbell couldn’t resist pulling out her phone to snap a picture. It seems the Valentino show was just a tease from Hutton, 75, as she has inked a multiyear partnership with StriVectin to be the beauty company’s first celebrity brand ambassador. 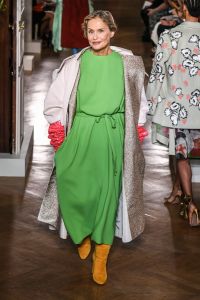 Hutton’s StriVectin ambassadorship comes nearly 50 years after she signed the first exclusive modeling contract with Revlon. In an interview with WWD, the icon spoke about her modeling career, how she has seen the industry change, the #MeToo movement and what she’s most proud of.

WWD: How has your skin-care routine changed through the years?
Lauren Hutton: Quite a bit. My whole skin care, from about teenage when I started doing it, was soap and water and Queen Helene eye pads. They were, like, $1.79 then. Everything started changing for me when I did Revlon [in 1973]. That’s when my life changed and a lot of other models’ lives changed, too. I only worked 20 days a year for them and I would make one movie a year and the rest of the time, I traveled. My skin care’s been extremely slapdash. I never used cleanser, I never used a stringent.

WWD: How would you say the film and modeling industries have changed?
L.H.: Everything is digitized and computerized. I’m out of that because I deliberately didn’t learn computers and I’ve never been on [social media]. My makeup business [Lauren Hutton Makeup] was on Facebook, but I wasn’t. What I found was you could find out so much by tooling around [on social media] that I would lose three or four hours out of whack. And a lot of it seemed useless to me and I’ve never liked machines particularly. I just didn’t want to do it. That’s the same answer for the thing called influencers.

WWD: What are your thoughts on the #MeToo movement in the film and modeling industries?
L.H.: It’s about time, certainly. The best thing I did with my money was seek out hunters and gatherers. The men go out and hunt pretty much every day and the women go out and gather fruits and berries. What the men did was, they were short-term hierarchical figures. When I would go out with the women, it was really different because it seems to me they’re long-term. We’re evolved to be long-term because of [pregnancy] and then another 12, 13 years in the bush, you have to keep [the child] alive. Our brains haven’t changed since those people. Not once. Not a bit.

WWD: What advice do you have for aspiring models and actresses?
L.H.: Well, never ever sleep with someone for any reason except, well, that’s something, too. To me, that’s really intimate stuff. Having a man who is bigger and stronger with male muscle enter your body, I’m talking about men entering your body, that seems to me to be extremely intimate.

WWD: What are you most proud of?
L.H.: That’s easy. I’m most proud that at 47, well, [“American] Gigolo” came out when I was 40 and that was the best movie I ever did. The script, everything. So I started taking acting lessons for the first time in my life after that. There were no 30-year-old models. I called editors all over Europe and told them that we had to have representations of women of all ages in our work or else we were foolish and we had no place for girls to grow to if they didn’t see grown women. Sure enough, after maybe seven to eight months, I started getting a lot of things. That’s what I’m proud of: that I brought women back into the image of ourselves at that age.