For just the fourth time in its accolade-giving history, the CEW is bestowing a Lifetime Achievement Award in October. 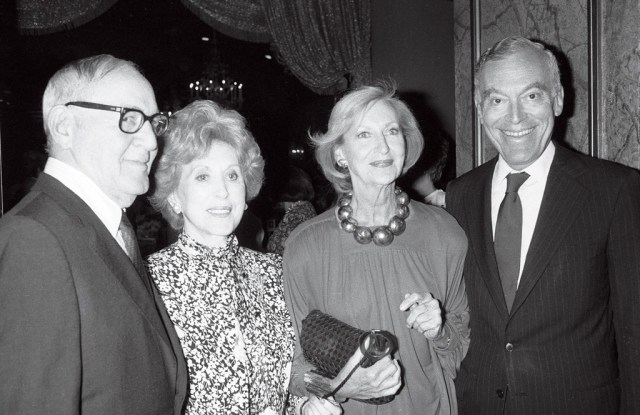 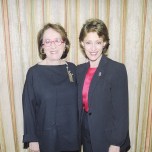 “The Lifetime Achievement Award was created for Mrs. Lauder. It was the first and only industry award she accepted, establishing CEW as a credible and important organization,” said Carlotta Jacobson, CEW’s president. “She helped put us on the map. Leonard has helped keep us there.”

Estée received her award in the Hall of Ocean Life at New York City’s Museum of Natural History in a striking navy Pierre Cardin gown, looking marvelously fit to the approximately 900 people in attendance. Called the Ball of the Decade, the event was the first black-tie industry event CEW ever held. Prior to that evening, CEW honored outstanding women at the Industry Achiever Awards Luncheon. Leonard, then chief executive officer of the Estée Lauder Cos. Inc., and Estée’s other son, Ronald, a mayoral candidate at the time, made the introductory remarks. As she accepted her award, Estée regaled the audience with how she placed her very first order with Neiman Marcus, traveling to Dallas by train. “I never went anyplace except by train,” she explained. “I felt if I was gonna make a lot of money, I might as well be here to use it.”

Said this year’s honoree, Leonard Lauder, “My mother always said, ‘I know what women want.’ She had a vision and didn’t have to depend on market research. She knew that her intuition, which was the foundation of [our] company, was all she needed, and her vision has lasted through today.

“When I entered the cosmetic industry, it was a business run by men for women. That didn’t work. Estée Lauder was founded by a woman, and we made an effort to hire women, women, women,” Lauder continued. “And that, I believe, is the root of our success.”

To date, Estée Lauder’s Jeannette Wagner and Avon’s Susan J. Kropf have been the only other recipients of Lifetime Achievement Awards — in 2002 and 2006, respectively.

“Jeannette was one of the first women to be appointed to her job [as president of International], not only [at] Estée Lauder, but in the whole cosmetics industry,” Lauder said. “She set the pace for the world. She worked hard and was tireless. She mentored everyone and was proud not just of the business she was able to develop, but of the people in the company that she brought up to a level of greatness.”

Said Jacobson about Kropf, “Susan made a real difference to women all around the world by making them financially independent, which in turn built self-esteem. She gave them an opportunity that they otherwise would not have had.”

So with just a rare few women being singled out for a woman-centric organization’s highest honor, where does Lauder fit in? Jacobson explained it isn’t much of a stretch: “Leonard always is and always was a champion of women in the industry.”

Meanwhile, over the last several years, men have been playing an expanded role in CEW as the former hen house has added more roosters to its ranks. In 2010, CEW counted just 170 male members; today there are 720, representing 12 percent of its constituent base.

Launched in 1975, the Achiever Awards were created to honor a leading woman executive who has contributed significantly to the growth of the beauty industry and the advancement of women. These achievers are selected annually by the CEW board of governors for a total of 110 recipients from 1975 to 2014. And as the number of award recipients has mounted, attendance has increased. The first Achiever Award was presented in front of an audience of 200. This year’s festivities are expected to draw a crowd of 1,100.

In addition to the Lifetime Achievement Awards, throughout the years, other special recognition awards also have been created. In 2003, Evelyn Lauder received the Inner Beauty Award for her philanthropic contributions. In 2011 and 2012, salon owner and hair-care product inventor Ouidad, aka the Queen of Curl, and Bond No. 9’s Laurice Rahme took home the Great Idea Awards, respectively. The Corporate Empowerment for Women Award has been conferred upon Johnson & Johnson (2010), P&G Beauty & Grooming (2011) and L’Oréal USA (2012).

“[Being honored] is terrific,” Lauder said. “But I’m really here as a representative of the women, and men, who continue to give their hearts and minds to maintaining our success.”