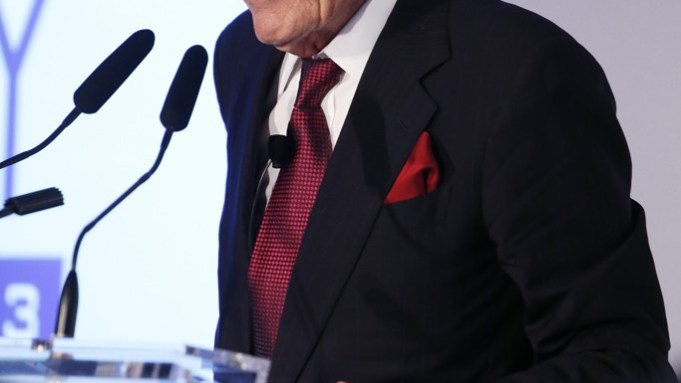 That’s how Leonard Lauder describes the state of progress in U.S. retailing and beauty today. And as chairman emeritus of the Estée Lauder Cos. Inc., and the man who developed or advanced many of the innovations that helped define the modern global beauty business, he should know.

“Amongst the retailers, every launch now of a new product has got to be a national launch,” Lauder observed. “No one is competing with anyone anymore [in the U.S.] And because these are all national launches now this takes a big commitment. We used to be able to launch a product maybe in 5,000 pieces or 10,000 in one city. Now we’re dealing in hundreds of thousands.

“We used to be able to launch a product in one community and then build from there,” Lauder continued. “You can’t do that anymore. That’s why I say we have more fun in London than we do anywhere in the world. Our growth in the U.K., Estée Lauder ELC growth, is twice the market because they are the most responsive market now in the world for new products.”

The same goes for the state of innovation, which he said is thriving among the new indie brands and also at Estée Lauder, of course. But he also remembers an instance concerning a mass brand, called Jane, that Lauder owned from 1997 to 2004. “The creative team came up with a phenomenal product for lipstick, called Mega Bites. ‘Oh my God,’ I said, ‘let’s get it right out.’”

The Jane team took it to Wal-Mart Stores Inc., Lauder continued. “The buyer looked at it, pulled out her computer and said that we had 3 percent more space than our volume allowed us to have. So she couldn’t give us any more space and number two, the reset was scheduled for another four or five months away. So that’s it, goodbye.

“The death of innovation is when finance trumps creativity,” Lauder declared. “The reverse of it is when you’re dealing with a merchant who loves new ideas — say Neiman Marcus or Saks Fifth Avenue, or Nordstrom. They say, ‘Oh what a terrific idea, when can we have it?’”

Lauder can be downright pedagogical in dealing with his executives. In fact, he teaches a popular legacy class in brand equity. Lynne Greene, group president of Lauder’s Clinique, Origins, Ojon, Aveda and Darphin brands, recalled learning in those classes that “brands are human, they are living entities and when we treat brands like human beings, magical things happen.” She quoted Lauder, “A brand is not created; a brand is born.”

Asked where he picked up this knack for teaching, Lauder replied, “If you get pleasure from seeing people grow, which I do, then it’s easy to become a teacher.” He cited an instance years ago when Pamela Baxter, president and chief executive officer of Perfumes and Cosmetics Americas at LVMH Moët Hennessy Louis Vuitton and president of Christian Dior Couture, was being honored by Cosmetic Executive Women. “She gave me the credit for what she had learned,” he remarked. “When I see a Pamela Baxter [who previously worked at Lauder] succeed, that’s great. Even though they’re my competitors now, their achievements make me proud of them.”

This is a time of reflection for Lauder, who at 81 can look back upon a momentous and storied career. And now the accolades are piling up.

He was named Renaissance Man of the Year by the Palazzo Strozzi Foundation USA in Florence in April. Next, CEW in New York will present Lauder with a first Lifetime Achievement Award on Friday, marking the first time that CEW has given an achievement award to a man. Lauder’s mother, Estée, received the first such award in 1986.

Not to be outdone, The Metropolitan Museum of Art will add its laurel to the list by unveiling also on Thursday the world class collection of cubist art — consisting of 78 works by Pablo Picasso, Georges Braque, Juan Gris and Fernand Léger — that Lauder donated to the museum, sealing his artistic legacy after a lifetime of collecting. “Everyone has been very, very nice, but I’m saying now, ‘What do I do for an encore?’” Lauder remarked during a recent interview. The next project at the top of his to-do list is his widely watched plan to remarry, following the death of his first wife of 52 years, Evelyn, from ovarian cancer in 2011. His intended, Judy Glickman, is a photographer and photography collector who apparently has awoken Lauder’s creative passions. “One of the things that very few people know is I was also a photographer, and a collector,” said Lauder, whose late wife was known as the photographer in the family. “So we have redecorated the upstairs part of our apartment [in Manhattan’s East 60s] and I put up all my photography. I’m living a new life.”

He also keeps himself busy as cochair of the Breast Cancer Research Foundation, pioneered and championed by Evelyn. He cohosted the organization’s annual symposium and awards luncheon Thursday at the Waldorf-Astoria, during which nearly $250,000 was raised on top of the $47 million collected during the year. He also is cofounder and chair of the Alzheimer’s Drug Discovery Foundation.

What truly matters to Lauder was on display during a warm summer morning in June at Bryn Mawr College outside of Philadelphia as he stepped to a microphone at an event that undoubtedly was the closest to his heart. It was the opening of the 100th week of the Estée Lauder Cos. professional staff development university program that started in 1988 at Vassar College in Poughkeepsie, N.Y., with a parallel program at Oxford University in the U.K. It was Lauder’s ambition to start the program and now he was reaching out to a roomful of more than 60 corporate managers, and he was basking in his element. Dressed in a seersucker jacket and a Bryn Mawr tie, he elicited waves of applause and peals of laughter as he dispensed every kind of advice, from the art of relationship building (“if you want to keep him,” he advised the women in the crowd, “don’t throw away his best torn T-shirt. Don’t do that.”) to the weightier matter of personal professional development.

“Why are we all here?” he asked. “We are here because the idea is to get better everyday. That’s physically better, that’s emotionally better, it’s mentally better — in every way get better. Read, look, learn. If you’re driving a car, and you go by McDonald’s, why’s McDonald’s so successful. Teach yourself.

“I decided to learn French. French? Who ever learned French at age 40? I did. I would walk down the street on the way to work and I would conjugate irregular French verbs.”

He then lightened his tone by admitting to having foibles, like occasionally mixing up people’s names. “I spend most of my time with my foot in my mouth,” said the man who is considered one of the most eloquent speakers in the industry.

Lauder ended his remarks at Bryn Mawr that morning by turning to the subject of dreaming.

Recalling his youth, he said, “I was a member of an organization, the Young Person’s Organization. There was a guy by the name of Viktor Frankl, who had been a survivor of the Holocaust. He said, ‘I had been in prison for four or five years. I always used to imagine what the future would be like. My dream was to stand in front of you. I didn’t know who you were, but I knew I would be standing in front of you and talking to you and that dream kept me alive.’

“Well you know what,” Lauder told the crowd. “My dream was to be able to stand in front of you. This is the 100th time we’ve done this and my desire was to be strong enough and fit enough to be able to do this. It’s my honor to welcome you —to be here with you.”

Greene worked with Lauder in developing the program as its first dean. She recalled that first summer — the initial program was nine weeks long — and noted, “The objective of this program was to inspire people to walk out of here and to have a new beginning; new eyes to see different things with and new ways to learn on your own.” She also recalled Lauder saying, “I want people to know how much I care about their careers.”

In the subsequent interview, Lauder said he got the idea to start the university program as one of the ways to preserve Estée Lauder’s heritage. “The challenge is how do you pass on a company’s culture from generation to generation?” he asked.

Other ways in which the organization passes on what Lauder calls “the culture of excellence” includes “van trips” as executives gypsy around from store to store and brand reviews when they travel through international markets. When asked, Lauder said his favorite moment came in that first summer at Vassar, when Bloomingdale’s then-chief executive officer Marvin Traub gave him a lift to the college in his helicopter. Phebe Farrow Port, senior vice president of Global Management Strategies and chief of staff of Executive Management Initiatives, who has headed the program since 2001, had to create a field marking so the pilot could spot the landing zone. So she herded the school participants outside and lined them up like a marching band to form a huge EL that could be seen from the sky.

In his reflective mode, when the discussion turned to mentors he had learned from, Lauder rattled off a list: Carol Phillips, “the woman who created Clinique”; Norman Orentreich, the dermatologist who worked with her; his mother, Estée; his father Joseph; June Lehman, head of creative services, and a long list of others.

“Here’s the thing,” he noted, “if you stop learning, you might as well pack it in.”

Asked whether he had a life lesson to pass on, Lauder shot back, “You can’t learn anything with your mouth open.”