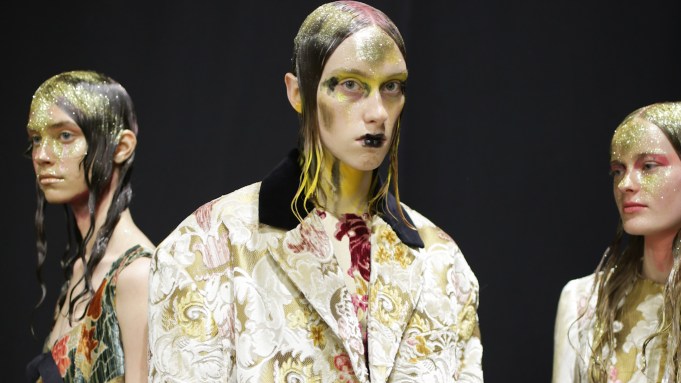 MILAN — Beauty looks seen on the runways in London and Milan over the past 10 days were disparate, ranging from a bare, natural complexion to extravagant and shiny ornaments in makeup and from simple, gelled hair to intricate and eccentric updos.

There was something for everybody in the wide array of options that were often infused with retro references, especially to the Twenties and Nineties.

From makeup to hair, here are the main beauty trends for next fall, ranked from easiest to most difficult to replicate.

POPPING LIPS: All you need is lipstick.

At Roksanda, Miranda Joyce opted for the MAC liquid lip color in the Burning Love burgundy shade, which she carefully applied with a brush, while Lynsey Alexander perfectly designed a bold, lacquered lip via the MAC Redd lip pencil coated with the MAC Patent Paint Lip Lacquer in the Red Enamel orange-red shade. “It’s quite a dangerous red and, like a varnish, it gives a PVC finish to the lips,” Alexander said backstage, mentioning that the look was inspired by the heroines from Dario Argento’s horror movies. At Fendi, Peter Philips offered a smudged version of the trend creating a dramatic prune-toned lip on all the girls. To get the effect, he tapped the Diorific 991 bold amethyst lipstick on the inside of the lip and then brought it out and softened the edges with a Q-tip. “It’s applied like a stain, so that it looks like the lips [you have] after kissing somebody or having a bit of wine — or both,” he said.

For Tom Pecheux, the black pointy eyeliner he drew with the MAC Brushstroke Liner at Moschino had the goal to telegraph “a little bit of toughness” and compensate the Marie-Antoinette-inspired rosy cheeks and peachy eyelids; for Dominic Skinner at Marco de Vincenzo, the style had a more playful appeal. Inspired by the rounded toe of a shoe in the collection, Skinner opted for a chubby take on the cat-eye, using the MAC Dual Dare Liner’s pencil end to draw the shape and the liquid liner end to fill the gaps around lashes, before coating it with the black metallic “Illuminaughty” eye shadow to get a leathery effect. “The end result is playing on this idea of a young girl dressing up as her mother, but she’s not allowed makeup, so she’s gone through her pencil case and got a marker pen to draw the eyeliner on,” Skinner said. At Missoni, Lynsey Alexander got minimal as she drew a graphic, conceptual black liner starting from the lower lash line to telegraph “a little bit Japanese-y kind of influence” while Pat McGrath pushed the boundaries to new territories at Prada, where she conceived a futuristic look. “It’s about pigment in motion, ultra-femininity with a little masculinity inside,” McGrath said while creating an iridescent, gradient effect in the shape of a scratch on the brow bones, delivering a twinkling yet edgy result.

Anti-volume proportions and gelled, high-shine effect dominated the hairstyles in London and Milan, but came under different guises.

Many manes were middle or side-parted and slicked back, often secured in straight ponytails or micro buns. These included looks seen at Christopher Kane, JW Anderson, Preen by Thornton Bregazzi, David Koma, Alberta Ferretti, Jil Sander, Versace, Sportmax and Marco de Vincenzo. At Prada, heads were “severely simple…almost like a computered-idea of hair,” said Guido Palau, who brought the straightening iron back from disuse to get a graphic, pulled-back coif. He added extensions to take the layers off the girls and reach one-length hair, before bedecking a number of models with gold, silver and red sleek metal headbands that added a sci-fi halo to the “futuristic classicism” of the look.

Extensions were also key to create middle-parted, poker-straight long hair nodding to the Nineties, as hairstylist Syd Hayes opted for at GCDS and Anthony Turner at Missoni. “This season we’re stripping everything down and really going back to basics,” Turner said backstage while he created a glossy headband of hair on the front of some girls by flattening strands with gel, tucking them behind the ears and securing them underneath the hair at the nape of the neck.

Heads at Erdem, Emilia Wickstead, Act N.1 and MSGM evoked retro vibes via gelled finger waves and S-shapes. At Erdem, Turner glossed tresses with an abundant amount of L’Oréal’s TecniArt Fix Max gel before side-parting the hair and shaping a double finger wave secured with a silver bobby pin, while Jawara Wauchope delivered a fresh take on the theme at MSGM using Sebastian Professional styling products for a wet effect. “We’re letting it dry a bit and then brushing it out. So it’s something that you can easily replicate at home,” he said.

Julien d’Ys took the gel consumption to the extreme at Marni, where he slicked down hair to the head and applied the product through all the lengths before embellishing the heads with arty paint strokes and glitter.

The most poignant makeup looks requested unconventional tools and creative techniques. Silver leaves, metallic foils, glitter powder, colored stones and threads proved to be the new must-have products to up the ante.

At Erdem, Lynsey Alexander reinterpreted Cecil Beaton’s work and nodded the recurring silver theme of the collection via silver leaves applied on eyelids, set and broken with a brush to design delicate and fragmented patterns. In a similar approach, Thomas de Kluyver pressed and cracked red, black and pink-toned thick foils on the eyelids of 10 models at Simone Rocha to create beautiful abstract motifs. At Preen by Thornton Bregazzi metallic foils covered parts of the forehead and ears while at GCDS Erin Parsons used the same trick to create statement lips.

Recycled sequins created three-dimensional motifs around the eyes at Paula Knorr; Isamaya Ffrench opted for crystal gazes at Halpern, reinterpreting the eye look of a renowned Gianni Penati photograph appeared on Vogue in 1968, while Tom Pecheux applied black, dusted pink and burgundy threads around the eye or on the upper cheek at Antonio Marras.

At Marni, the mastery of Julien d’Ys was in full display as he splashed colored paint and metallic glitter all over the heads and face of the models, giving Milan Fashion Week its best beauty moment.

WIG IT UP: Patience requested.

Hairstylists’ actions were not limited to models’ heads only, as they worked days ahead of the shows to sculpt, weave and mold extensions and wigs to deliver statement looks.

At Erdem, Turner nodded to the metallic accent running throughout the collection via six cropped, silver-sprayed wigs with a futuristic appeal, while at Moschino, Paul Hanlon created exaggerated, pastel-toned ones inspired to Marie-Antoinette that required a week of work.

James Pecis masterminded the intricate look at Antonio Marras, where he sewed extensions together to create “a piece of fabric of hair” with colored stitching popping up. He wrapped these panels around models’ heads, after pulling their hair back into high ponytails woven in rope braids around elastic threads, and blended the two parts with twist and turns resulting in a labyrinthine, sculptural updo.

Hair wizard Sam McKnight also used braided hair extensions to create the “Star Wars princess-y” look telegraphing the return to elegance demanded by the lady-like Fendi collection. In his journey to envision the hairstyle, McKnight made a quick detour to a pastry shop, as he mentioned twisted pretzels, plaited loaves and cinnamon swirls among the treats that inspired the shapes of his updos, which were bedecked by backward headbands in suede, satin and leather.