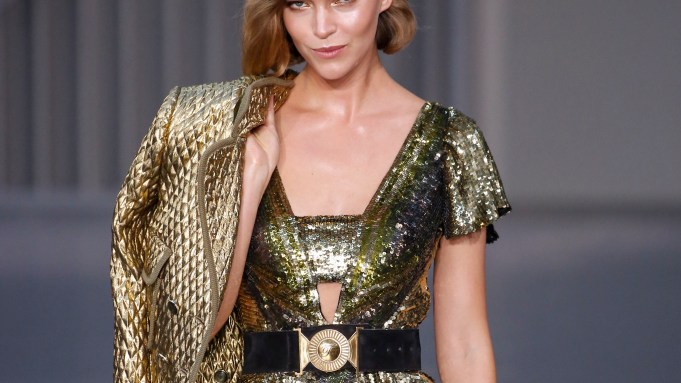 SOPHISTICATED HAIR: Chic, sophisticated hair dominated the runways at London shows such as Erdem, J.W. Anderson, Simone Rocha and Temperley London. “A modern type of Twenties hair” is how Anthony Turner, who was working with L’Oréal Professionnel products and Dyson tools, described the beauty look at Erdem. “The side parting gives a masculine feel to the hair,” he said. “While the finger wave creates a Twenties aesthetic, this is a girl who’s been trudging around her estate in all weathers. So the wave is mushy and imperfect, and the color of the hair pins contrasts [with] that of her hair to make it seem random and homemade.” At J.W. Anderson, Turner went for a sleek, flicked-out Sixties bob style. “She is very existential, intelligent, well-kept, with very beautiful hair,” he said. “The inspiration is basically a very well-groomed art student with a bit of a Sixties vibe to it.” Over at Simone Rocha, hair was styled by James Pecis, who created chignons or braided updos. “The painter John Constable was one of the starting points for the inspiration,” he explained. “It was more about the color scheme in his paintings and also his portraits of women. There is a lot of tailoring in this collection, so they wanted to bring a tomboy feeling.” Meanwhile, at Temperley London actresses from the Thirties were the focus for hairstylist Antonio Corral Calero. Working with Moroccanoil, he created glamorous wavy hair by parting tresses and pinning sections into waves.

BOLD BROWS: Bold brows had a moment on the runways of shows such as Isa Arfen, J.W. Anderson and Toga. “She’s a handsome, Brooke Shields, super-woman,” said Aaron de Mey — who worked with Nars Cosmetics at the J.W. Anderson show, where models were given exaggerated eyebrows which looks like “they haven’t been plucked.”
“The inspiration for this season was raw beauty, with an emphasis on fresh skin, boyish brows and haunting eyes,” said makeup artist Andrew Gallimore, who brushed models’ brows up at Isa Arfen. Meanwhile, at Toga, makeup artist Sada Ito said: “The makeup look this season is fresh, polished skin with a strong eyebrow. It’s all about confidence.”

RAZZLE-DAZZLE: There was a plethora of sparkle and shine shimmering on models at the Delpozo, Preen by Thornton Bregazzi and Temperley London shows. Glitter glowed on models’ hairlines and foreheads at Preen by Thornton Bregazzi as if they had just emerged from the water. There, Val Garland crafted a high-shine look as speckles of glitter were blown onto models’ faces. For the hair look for the show, created by Eugene Souleiman, some models sported glittery side parts. “The inspiration for the hair is sea anemones,” he said. “We want the girls to look like they’re in water, with their hair looking otherworldly — like it is floating with zero gravity. We’re putting glitter in their hair, so it’s glistening.” Makeup artist Mónica Marmo said she took inspiration from the textures and finishes of Delpozo’s fall collection. “Focusing on this, I created contrast with the beauty look by giving the models matte skin and eyes painted with a shiny, metallic silver,” Marmo said. Charlotte Tilbury looked to film stars and paid homage to the Thirties and Seventies for her beauty look at for Temperley London, which included what she called a “smoky bronze Hollywood eye.”