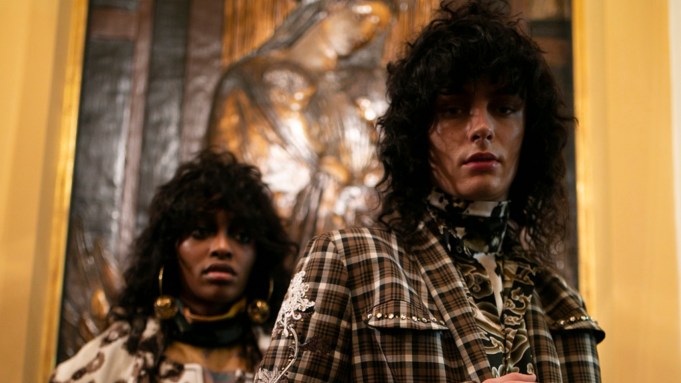 UP TOP: Short or long, curled and colored, statement hair was the number-one accessory at the London men’s shows. Models at Martine Rose, Edward Crutchley and Pronounce rocked some dramatic styles, while Grace Wales Bonner, JordanLuca and Nicholas Daley were among those who instead chose hats to top off their looks.

At Pronounce, models’ hair was parted at the side, neatly combed and streaked with color.

Hairstylist Kalle Eklund said she wanted to emphasize the rich fabrics of the collection. “I noticed a lot of high-shine materials, watercolors and graphic shapes and wanted to pick that up in the hair as well. The blond highlight going from the parting emphasized the watercolor prints,” she said.

Designer Priya Ahluwalia also wanted to highlight her Sixties inspirations. “I became really entranced by the work of artist Barbara Brown and her use of curves in a lucid, and almost trance-like way. I wanted to think about these shapes in terms of hair and thought about classic finger waves in Afro hair culture,” she said.

Models’ curls were thick, glossy and defined, like twirls of licorice, or big and sculptural, à la Donna Summer in the Seventies.

Mops and curly hair mullets were all the rage at Edward Crutchley, and added even more texture and interest to his busy, colorful collection.

“This season we wanted to create a layered and textured style that added to the overall richness of the collection, but that also created a counterpoint to all the opulent fabric by referring to a dirtier rock ‘n’ roll influence,” said hairstylist Kota Suizu of Crutchley’s looks.

Martine Rose frizzed out her models’ hair, and pushed it to one side in a pouf, while Charles Jeffrey Loverboy re-created hairstyles found in the work of the playwright and artist John Byrne. His models showed off large, exaggerated, brightly colored quiffs.

Hats, too, played a big role for fall, with Stephen Jones working overtime and designing for names including JordanLuca, Wales Bonner, and Crutchley.