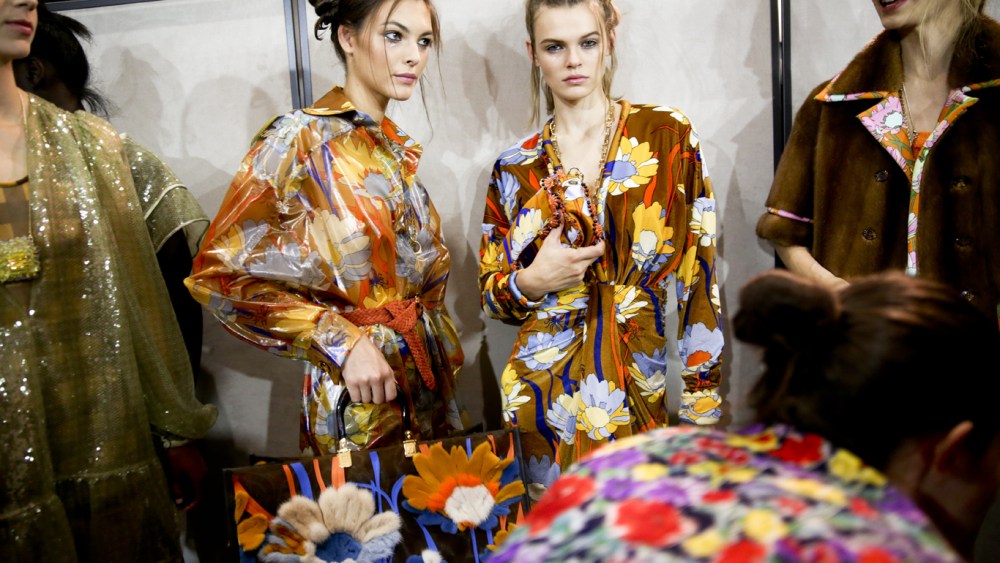 MILAN — A sense of playfulness and a quest for personalization dominated the beauty looks seen on the runways in London and Milan over the past 10 days.

After leaving its mark on New York Fashion Week, HBO’s hit show “Euphoria” resonated with many designers and makeup artists in Europe, too, proving once again the relevant impact its unique aesthetics and authentic storytelling had on current pop culture and younger generations.

Beauty-wise, this resulted in a heightened focus on the eyes. A lot of eye shadows and liners rendered in creative ways through glitter, acid and neon colors and rhinestones popped both in London and Milan. In the former case, they matched with the collections’ maximalist silhouettes and bright colors, which were intended to offer a light, optimistic fashion reaction to Britain’s political concerns. In the latter case, bold eye makeup was often used to counteract clothing’s essential, Nineties-inspired minimalism shapes that trended in the Italian city this season.

“I think we have all seen how the show ‘Euphoria’ has made an impact on people and that’s why we’re probably seeing a lot of glitter and color this season,” confirmed makeup artist John Stapleton backstage at Marco De Vincenzo. “I believe it’s a commentary on individuality: every girl is different, every individual is different and this should be a little bit about a celebration.”

Individuality was fully embraced in hairstyling. Inspirations swinging from Seventies to Nineties styles were adapted to each mane and hair texture, with some shows featuring multiple hair looks rather than imposing the same concept on all heads.

Styles ranged from natural beach waves and easy, messy updos to more intricate braids and artsy structures, with customization peaking at the Fendi show. Here, hair wizard Sam McKnight delivered a fun, naïf look “as [girls] did it themselves” by actually inviting models to take part to the process, including Kendall Jenner tying her hair in a messy, side ponytail and Bella Hadid styling double buns on her head.

From makeup to hair, here are the main beauty trends to have fun with next summer.

More essential yet bright takes on the trend were seen at Peter Pilotto, where Inge Grognard created random shapes in neon baby blue, orange and lilac tones, and at MSGM, where Lynsey Alexander turned neon primary shades into graphic, sweeping liners for a punkish look. Pat McGrath focused on drawing a simple blue or burgundy line in the eye socket at Victoria Beckham, while she opted for bolder, under-eyebrow strokes at Prada and Versace.

Accessorized eyes were seen at Marco De Vincenzo, where Stapleton used rhinestones, and at Giorgio Armani, where Linda Cantello offered an upscale look lining a thin veil of transparent sequins on eyelids.

BRAIDING GAMES: Braids in different shapes and sizes were strong this season. The most striking interpretations on the theme were seen at Simone Rocha, where Duffy created three different Victorian-inspired looks, including elaborate French braids with raffia inserts. At Antonio Marras, James Pecis opted for fabric inserts to adorn side braids that conveyed a Japanese anime-feeling, while Anthony Turner used a black ribbon to secure simple, central braids at Erdem. Other takes on the trend also appeared at Max Mara and Stella Jean.

ALL GELLED UP: Many hairstylists opted for easy-to-replicate gelled styles to deliver summery, wet-looking heads or telegraph a more masculine attitude. Manes were pulled back and treated with generous amounts of gel and high-shine sprays at David Koma, Emilia Wickstead, Christopher Kane, Salvatore Ferragamo, Versace and Boss, among others. At A.W.A.K.E. Mode and Jil Sander, combed-back ponytails were also punctuated by thin, Nineties-inspired headbands.

ARTY TOUCH: The mastery of Julien d’Ys was in full display in Milan, where he interpreted Moschino’s Pablo Picasso-themed collection with a slicked, middle-parted chignon, which he embellished with strokes of actual yellow, blue, red, pink and green paints. D’Ys was also behind the best hairstyles seen at the Italian shows: a wide range of jaw-dropping, clay-sculptured updos adorned with fresh flowers, branches and raffia he personally maneuvered backstage at Marni. For those who don’t boast his skills, Anthony Turner offered a practical solution at Missoni, pinning fresh flowers inside French twists for a delicate effect and a perfect, summer-wedding inspiration.