The indie spirit continues to grow at Lorac. 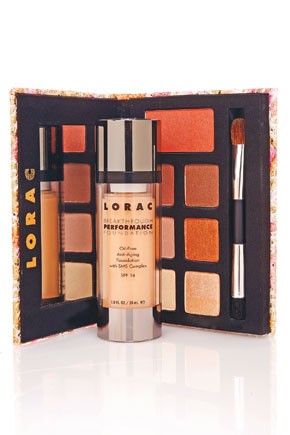 The indie spirit continues to grow at Lorac.

The color cosmetics and skin care brand, founded by celebrity makeup artist Carol Shaw in 1995, plans to more than double its distribution next year, thanks to two recently inked initiatives. The first will take Lorac into 290 Ulta doors nationwide in March. The brand currently is available in 185 freestanding Sephora doors, 47 of the Sephora/J.C. Penney joint stores, sephora.com and 16 independent cosmetics boutiques. Lorac is also giving its Web site, loraccosmetics.com, a facelift in January.

“The Ulta deal allows us to reach a new and different consumer,” said Shaw. “It also gives Lorac additional sources of revenue and expanded promotional opportunities. It is helping to transition from being an entrepreneurial company to a bigger business.”

Shaw gives Barry Alan, Lorac’s senior vice president and chief operating officer (and, incidentally, her brother), and David Hirsch, an attorney with an MBA who does “everything from legal work to product development,” in Shaw’s words, much of the credit for the brand’s growth trajectory.

“My intention, when I started Lorac, was to have a makeup line I could sell at Fred Segal in L.A.,” said Shaw. “Being a working makeup artist and someone with extremely sensitive skin, I wanted to have a line that I could use on my clients and on myself. I’m lucky to have Barry and Dave — they’re the ones who brought it to this level, not me. I love to create products and work with celebrities, but they are the business minds. They’ve helped me to move from 300 bottles of foundation in a one-bedroom apartment in West Hollywood to owning our own warehouse. That’s when I knew we’d truly made it — when we bought our first forklift!”

As part of the Red Carpet Authority positioning Lorac introduced earlier this year — a nod to Shaw’s other career, making up stars for major Hollywood events and photo shoots — the brand will release what it is touting as the fastest runway-to-reality makeup ever, the Best Dressed Palette. The bejeweled $37 compact contains six neutral eye shadows and a rose-bronze blush. Shaw said she plans to use the palette on celebrity clients for the 2008 Academy Awards. It will be available at retail the next day, as an exclusive for Sephora.

“The whole idea was to bring that immediacy of the awards shows to the consumers while they were still excited about the looks,” explained Shaw. “Plus, with the shimmery neutral eye shadows, and gold-accented packaging, it’s also very much on trend.”

Also coming for spring 2008: Breakthrough Performance Foundation, an oil-free, antiaging foundation, $38; Visual Effects Mascara, intended to curl, separate and lengthen lashes, $19.50, and On Screen Duo, a compact powder highlighter and cream eye shadow team, $24. Shaw said she is particularly proud of the foundation, which is powered by the brand’s proprietary SMS Complex: “This complex works on the ‘second messengers,’ which stimulate and amplify the molecules that enhance the skin’s natural intercellular activity, leading to improved cell turnover.” It will be available in seven shades.

While Shaw declined to discuss sales projections, industry sources estimated that the spring Lorac introductions would add about $5 million in retail sales to the company’s revenues.

Earlier this year, Lorac retrofitted its gondolas in all Sephora doors, replacing wood with black accent units with black and Lucite displays adorned with black-and-white editorial images. While gondolas aren’t yet final for the Ulta doors, Shaw said that “the positioning is the same for Sephora and Ulta, but the execution isn’t. Both retailers will have fixtures customized for them.”

The Web site, when it is relaunched, will be an e-commerce site, noted Shaw. “We’ll carry the full line, plus old favorites which might not still be available in-store,” she said. “Gondolas are finite selling spaces, but on a Web site, you can have an unlimited range of products — so we’ll help out our customers if we can. The timing is right for Lorac to relaunch the Web site: We’ve rebranded and have a great Red Carpet strategy, and it’s time to tell our new story.”

Lorac also has begun to repackage its stockkeeping units in black outer boxes with flashbulb imagery on the front and a red velvet rope image on the back — another nod to Shaw’s ties with Hollywood. The repackaging effort will continue through fall 2008.