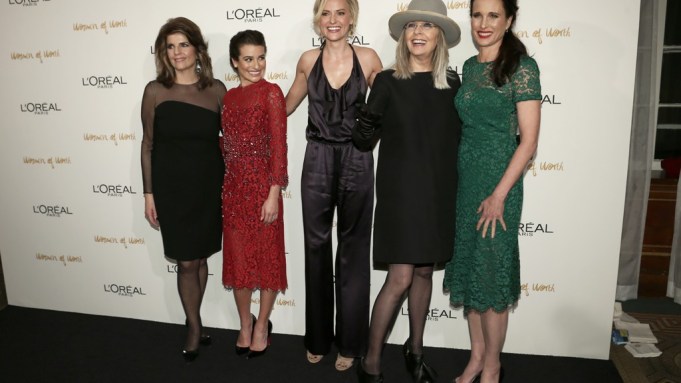 L’Oréal Paris has increased the exposure for a special award program saluting 10 women across the country who have established grassroots nonprofits that aid their communities. The eighth annual Women of Worth gala, held Tuesday night at The Pierre in New York City, drew about 250 people, the most since the program’s inception in 2006. L’Oréal executives made the point that while in the past the event was held in partnership with Hearst at the Hearst headquarters, this was the first time it was designed for a wider audience.

“The more we can build awareness and put these women in the spotlight, that’s the opportunity to help them gain traction by meeting and networking with other women with like causes, that’s the real objective,” said Karen Fondu, president of L’Oréal Paris, adding that $1 million has been donated through the program to date. “These are real women, everyday women that have gone through often times a personal tragedy and have had to find the courage to pick themselves up to go out and make the world a better place.…The commitments have begun from places of pain and sorrow but never defeat.”

The 10 winners each received $10,000 for their respective charities. They included Kimberly Iverson, founder of the Bucket List Foundation, which grants end-of-life wishes to the terminally ill; Maria D’Angelo, president and chief executive officer of The Children’s Lifesaving Foundation, which supports homeless and at-risk children and families; Tricia Baker, cofounder and codirector of Attitudes in Reverse, an organization focused on educating society about mental illness; Patty Boles, executive director of Straight From the Heart, Inc., which provides resources for foster children and their caregivers; Estella Pyfrom, ceo of Estella’s Brilliant Bus, a mobile learning center serving low-income communities; Kaitlin Roig-DeBellis, a survivor of the Sandy Hook Elementary School tragedy and founder of Classes 4 Classes, which teaches U.S. students compassion and empathy; Susan Garcia Trieschmann, executive director of Curt’s Café, a nonprofit restaurant that offers real-world training and support to at-risk youth; Somy Ali, president of No More Tears, an organization whose goal is eradicating violence both domestically and abroad; Lori Lee, founder of Me Fine Foundation, which provides financial assistance to families with children undergoing treatment at Duke and UNV Children’s Hospitals, and Lauren Book, founder and ceo of Lauren’s Kids, which aims to prevent sexual abuse among children.

At the end of the evening, Book, a sexual abuse survivor herself, was named the 2013 Women of Worth national nominee, which provided an additional $25,000 for her cause. Book was chosen by over 100,000 votes via the Women of Worth Web site and across L’Oréal’s social media pages.

“The greatest risk factor of being a victim of abuse is being a child, but 95 percent of sexual abuse is preventable with education and awareness,” said Book in a video clip shown to the audience during the presentation. “My world could have been colored by what happened, but I decided that I wanted to pick the color.” Among the evening’s presenters were L’Oréal celebrity spokeswomen like Diane Keaton, Andie MacDowell, Aimee Mullins and Lea Michele.

“In life, when you are faced with an unfortunate circumstance, there’s no book, there’s no guide, there’s no right answer on how to get to the other side,” said Michele, in a crimson D&G lace sheath, who presented Book with her award. “You just sort of wake up one day and you have two paths in front of you, one where you go up and one where you can fall, and choosing the path to rise is most certainly not the easy path but it’s the brave one.”

Before the show, a few of the presenters chatted with WWD about upcoming projects. “I just finished a movie with Morgan Freeman. I play his wife,” said Keaton from under a wide-brimmed bowler hat with her signature laugh. “I enjoyed that. I didn’t have a problem. It’s called ‘Life Itself,’ so you better see it.”

Michele, who is introducing her first book, “Brunette Ambition,” later this month and her first pop album, “Louder,” in 2014, gave advice for how she keeps beautiful through her busy schedule. “Wash your face before you go to bed, drink a lot of water and don’t pop your pimples,” she quipped.

MacDowell, in an emerald Burberry cocktail dress, said she that while she is excited that her Hallmark Channel show “Cedar Cove” has been picked up for a second season, she has a backup plan. “My future goal if this doesn’t continue is to do a reinvented ‘Golden Girls.’ Like a modern version,” she said. “I just want to stay in the business long enough to be one of the girls.”