PARIS — L’Oréal has created a new Europe Zone within its structure, whereas in the past Eastern Europe and Western Europe were run separately.

The new Europe Zone will be headed by Vianney Derville, who is currently president of L’Oréal Western Europe Zone. 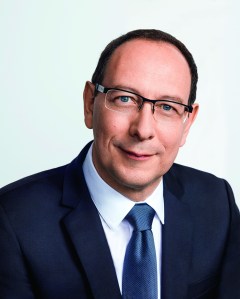 “This organizational change has been designed to put in place the optimum conditions to help drive future growth and represents the last stage in the reorganization of the group’s zone structure,” L’Oréal said in the statement.

Derville joined L’Oréal in 1992 and has held numerous positions in many countries since then. He was most recently, in 2016, appointed to head up the Western Europe Zone and joined the company’s executive committee. The executive has been credited with transforming the region into a multidivision model that’s led to large market-share gains.

After serving as general manger of L’Oréal Spain beginning in 2004, Derville returned to Paris in 2007 and served in various positions prior to being named head of international Consumer Products Division markets in 2013.

The next year, he moved to the U.S. to oversee the Consumer Products Division there. Under his leadership, that division registered a significant return to growth.

“Vianney’s wealth of experience and long track record of driving sustainable business growth make him the perfect choice for this highly strategic role,” said Nicolas Hieronimus, L’Oréal chief executive officer, in the statement. “I am very excited to see these two former zones coming together under his leadership to help the group better serve the needs of our consumers, retailer partners and stakeholders, whilst having the flexibility to adapt to local specificities.

“I also want to thank Alexandre for the successful development of our business in Eastern Europe and for his overall contribution to the L’Oréal adventure,” he added.

In early November 2020, L’Oréal announced that it was changing the organization of some of its geographic zones — Asia, the Middle East and Africa — and made new executive appointments to match the revised structure.

At the time, the reason given was to “give greater coherence to each zone, particularly in terms of consumer behavior and market maturity, to create the conditions for the transversal transformation of the organization and to maximize growth.”